Delighted Ukrainians shared selfies on social media today in which they showed off their leopard-print clothes.

Women donned coats, tops and leggings. One soldier draped a blanket over his shoulders. A child apologised for only being able to find slippers.

The reason was simple: Germany’s cautious chancellor, Olaf Scholz, had bowed to growing pressure at home and abroad to sanction the use of its Leopard 2 tanks in Kyiv’s existential struggle for survival against Vladimir Putin’s assault.

This move is a boost for Ukraine after 11 months of war. There are more than 2,000 of these German-designed tanks in the arsenals of 13 European nations, but it needed Berlin’s approval before any can head to the battlefront. 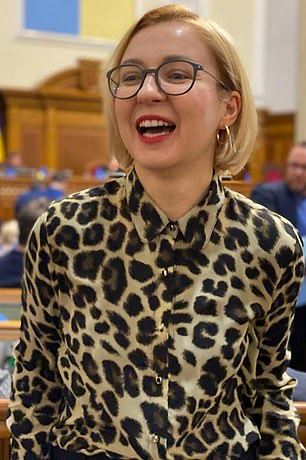 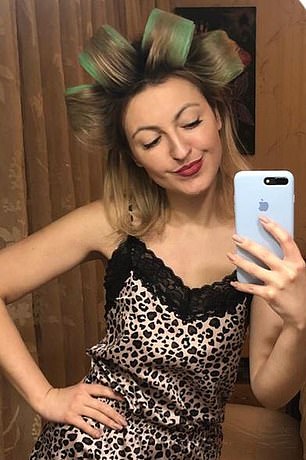 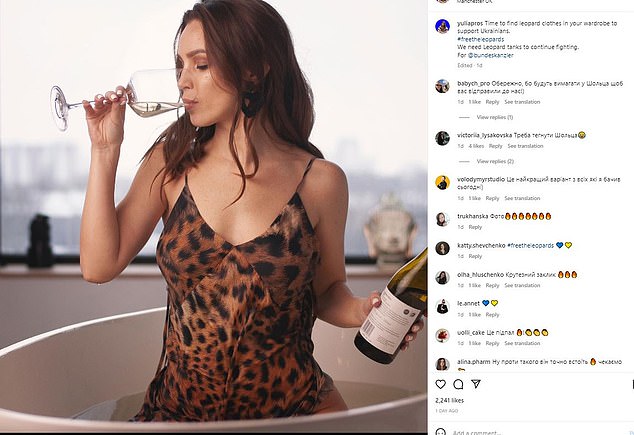 Scholz brazenly claimed ‘Germany will always be pioneering support for Ukraine’ as he made his ‘historic’ move to send 14 tanks to Ukraine and permit the likes of Finland and Poland to do the same.

The reality is rather different. Last week Britain offered 14 Challenger 2 tanks to prod others into action — but Scholz prevaricated, seeking to appease factions in his party and in Germany generally.

Bear in mind the last German chancellor from his Left-leaning Social Democratic Party was Gerhard Schroder, a close friend of Putin who has made millions promoting the Kremlin policies that left Europe so dependent on Russian energy.

Yet as Boris Johnson wrote in a passionate article for this newspaper on Tuesday, there were no grounds for delay.

‘Why are we not giving the Ukrainians all the help that they need, now, when they need it?’ he rightly asked, following a visit to Kyiv’s scarred suburbs. ‘Just what the hell are we waiting for?’

Ukrainian officials first asked for these tanks ten months ago, and it will be three more months until they are ready for combat operations. The US is also sending more than 31 M1 Abrams tanks. 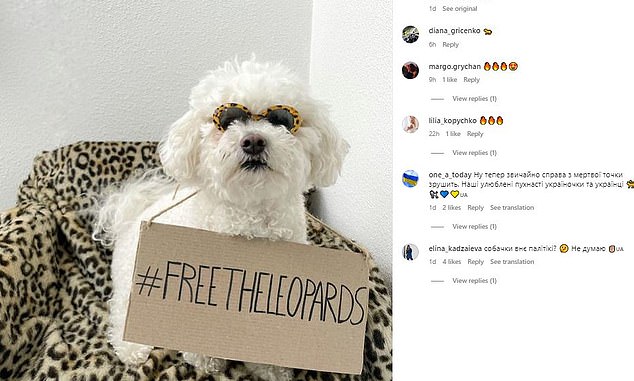 One Instagram snap featured a Bichon Frisé wearing leopard-print sunglasses while sitting on a matching blanket, with a banner #freetheleopards 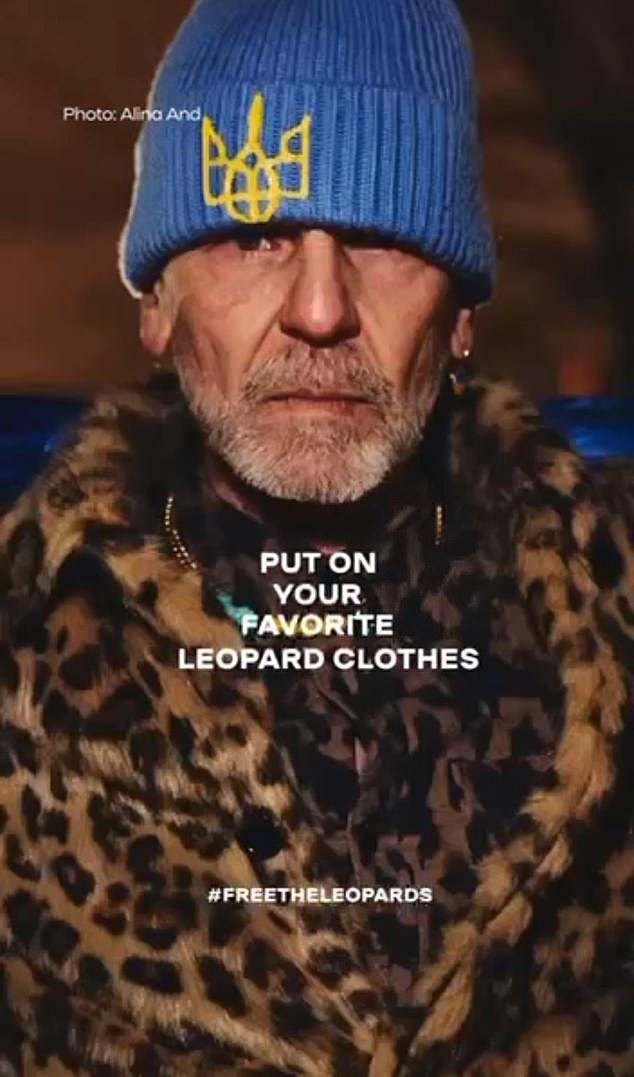 Another meme on social media showed a man in a leopard-print jacket, with the hashtag #freetheleopards

These machines can make a difference, since they are faster and technologically superior to Ukraine’s Soviet-era tanks, while their guns are compatible with Nato ammunition at a time when supplies for their existing equipment are dwindling.

Time is critical, as both sides use winter to regroup ahead of expected spring offensives. Moscow is fortifying defences along the 600-mile front line, sending in freshly mobilised reserves and trying to fix tensions between its military chiefs and Wagner Group mercenaries. Ukraine is adjusting to the traditional Russian tactic of throwing waves of men into battle regardless of the losses, as it integrates Nato gear into its forces.

Yesterday, Kyiv confirmed it had pulled back from the shattered town of Soledar to ‘preserve the lives of service personnel’, with officials claiming their forces were confronting up to five times as many Russians. This underlines the scale of the challenge. Yet Ukraine remains confident of ultimate victory, with sufficient help.

These weapons could strike anywhere inside Ukraine – including Crimea – to disrupt Moscow’s logistics, sever supply lines and force ammunition dumps back. 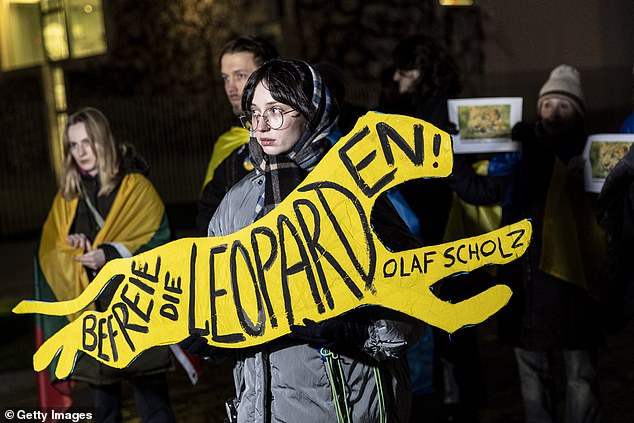 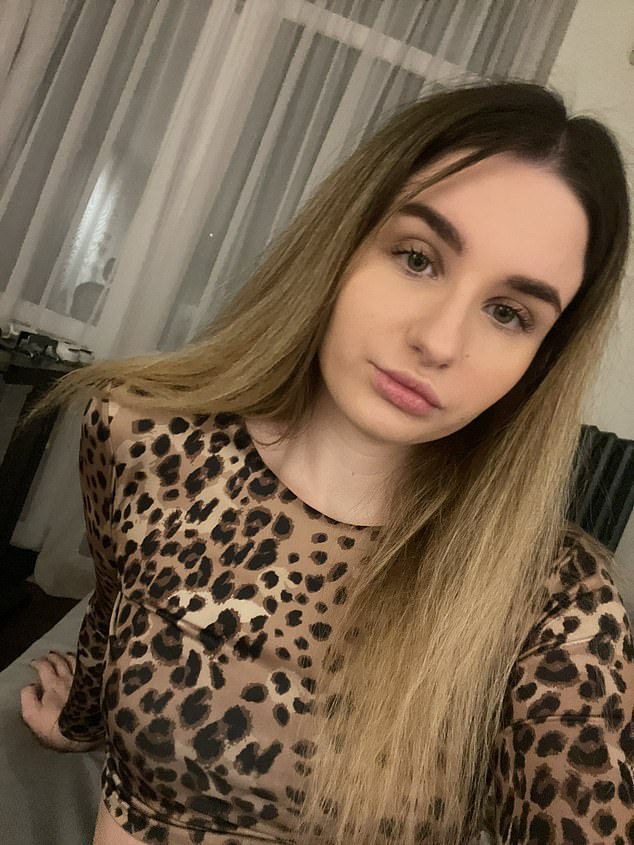 Although Germany had to be pushed into sending tanks, the West has again defied Putin’s expectations that the alliance backing Ukraine would crumble as war dragged on. Instead, widespread recognition that his bungled invasion was an assault not just on an independent nation, but on the very nature of European democracy is fuelling that support.

There are understandable fears of escalation. These are inflamed by the Kremlin, with blood-chilling warnings of nuclear war and absurd allegations that the despatch of Western tanks proves Russia is the victim of a ‘pre-planned war’.

But it is too late to worry: Ukraine is the proxy battleground between democracy and dictatorship. And this finally became clear to the West from the moment Russian missiles started raining down on Kyiv and Kharkiv last February.

Have no doubt the blame lies entirely with Putin, nor that defeat for Ukraine would be disastrous for democracies and our shared liberal values of freedom.

Few countries understand this better than those nations that threw off Moscow’s shackles three decades ago after the collapse of the Soviet Union.

Take tiny Estonia, which has given more per capita than any other nation to aid Ukraine’s defence.

‘Estonians know from their painful history what happens when evil triumphs and a large country swallows up smaller ones,’ said prime minister Kaja Kallas. ‘If Ukraine falls, freedom is in danger elsewhere in the world as well.’

She is right. This is why we must ignore the fainthearts and Kremlin fellow travellers to focus on doing everything possible to speed up Putin’s defeat, halt his genocidal atrocities, preserve the global order – and send a warning to other despots.