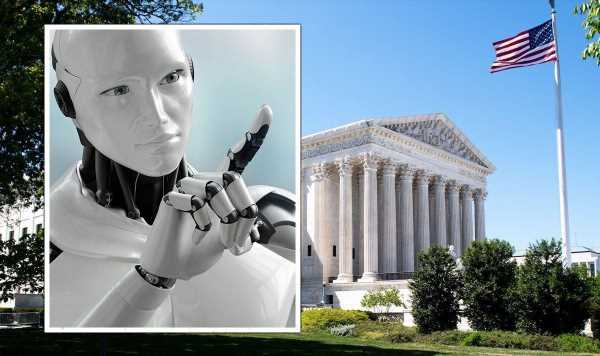 The founder of a new startup is offering a $1million (£808,000) reward to anyone who is willing to secretly bring the company’s robot lawyer into the US Supreme Court and argue their case for them. Joshua Browder, the CEO of Do Not Pay, made this announcement on Twitter, offering the services of his artificial intelligence (AI) legal assistant to help defendant fight cases where legal fees for human lawyers are exorbitantly high. The AI has been hailed as “the world’s first robot lawyer” and can be operated through an app that listens to court arguments as they happen, and then advises the defendant what to say via headphones.

While the robot has already being used to help a defendant fight a traffic ticket next month, the CEO aims to send his AI tool to the highest court in the US. Unfortunately, the US Supreme Court bans any electronic devices from being present in the courtroom while court is in session.

This led Mr Browder to tweet: “DoNotPay will pay any lawyer or person $1,000,000 with an upcoming case in front of the United States Supreme Court to wear AirPods and let our robot lawyer argue the case by repeating exactly what it says.

“We have upcoming cases in municipal (traffic) court next month. But the haters will say ‘traffic court is too simple for GPT’. So we are making this serious offer, contingent on us coming to a formal agreement and all rules being followed. Please contact me if interested!”

According to New Scientist, next month’s unprecedented hearing involves a ticket issued for speeding, and the defendant will use the robot lawyer and only say in court what the AI instructs them to say.

Should the defendant lose the case, the startup has agreed to cover any fines, according to Mr Browder, who launched his company in 2015, initially serving as a chatbot that provides legal advice to consumers dealing with late fees or fines.

Since then, the company has pivoted towards AI, with Mr Browder admitting that it took a long time to train the robot on case law covering a wide range of topics.

He also had to ensure that the robot sticks to the truth, telling New Scientist: “We’re trying to minimize our legal liability. And it’s not good if it actually twists facts and is too manipulative.”

The AI app will listen in on arguments heard in court, and analyse them before instructing the defendant on how to respond. Mr Browder added that his ultimate goal is to replace some lawyers, saving defendants money.

He said: “It’s all about language, and that’s what lawyers charge hundreds or thousands of dollars an hour to do.

“There’ll still be a lot of good lawyers out there who may be arguing in the European Court of Human Rights, but a lot of lawyers are just charging way too much money to copy and paste documents and I think they will definitely be replaced, and they should be replaced.”

On their website, the company has stated their mission as: “DoNotPay utilizes artificial intelligence to help consumers fight against large corporations and solve their problems like beating parking tickets, appealing bank fees, and suing robocallers.

“DoNotPay’s goal is to level the playing field and make legal information and self-help accessible to everyone.” They add that through their app, users can “Fight Corporations, Beat Bureaucracy, Find Hidden Money, Sue Anyone”, and most impressive of all “Automatically Cancel Your Free Trials”.

Mr Browder noted that his AI begins by asking the user what their legal problem is, and then finds a loophole, turning it into a legal letter, which it can send to send to the right institution.

However, legal experts have warned that putting one’s legal rights into the hands of an AI app could be ethically worrisome, according to the Daily Beast.

Given that recording is prohibited in many US courtrooms, using an AI could result in legal consequences for the defendant that far worse than a traffic ticket.