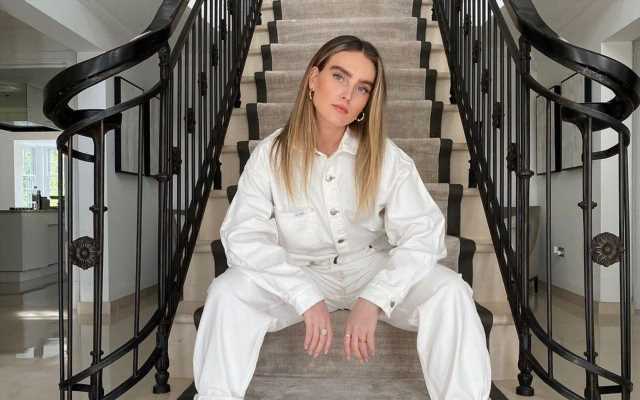 The Little Mix singer is reportedly close to securing a record deal with the label which also becomes the home to the likes of Harry Styles and Beyonce Knowles.

AceShowbiz –Perrie Edwards is in advanced negotiations with Columbia Records. The Little Mix singer has been preparing solo material since the group went on hiatus and fans are getting closer to being able to hearing the songs because the blonde beauty is close to signing a record deal with the label, which is also home to Harry Styles and Beyonce Knowles.

“Perrie is super-talented and label execs think she could be a global star. They are very keen to ink a deal soon and talks have been ongoing. Perrie is bursting with ideas for solo material,” a source told The Sun on Sunday newspaper’s Bizarre column.

The “Shout Out to My Ex” hitmaker recently admitted she has been having “so much fun” in the recording studio working on her solo tracks. She said, “It’s all going really well. I’m just having so much fun experimenting with different sounds. It’s really good. I’m so lucky, I’m working with such amazing people. I’m really grateful. I want to make music that I love.”

Last summer, songwriter Kamille – who worked with Little Mix and has been in the studio with Perrie -teased the 29-year-old singer’s material will “blow everyone’s minds.” She added, “Perrie will get in the booth and she’ll be so worried and insecure.

“Even when I was with her the other week with Steve Mac, she got into the booth and was like ‘I don’t know if I can do it.’ I looked at her and I was like ‘Are you actually serious? Your voice is one of the best voices I’ve ever heard, hands down.’ “

“She’s incredible. She doesn’t even know how good she is, and that’s one of the most beautiful things about Perrie; she’s so humble. It’s been so exciting to be making music with her. I can’t wait for you guys to hear it all done. As you know, there’s so much more to come from her.”