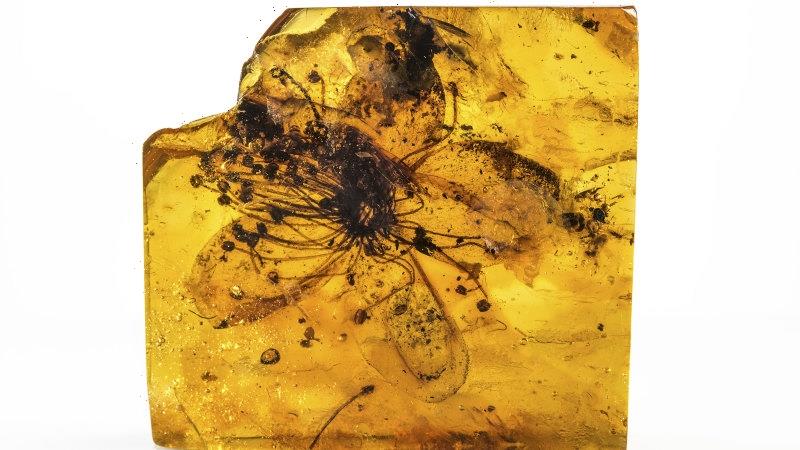 Chicago: Eva-Maria Sadowski, a postdoctoral researcher at the Natural History Museum in Berlin, didn’t have a particular agenda in mind when she decided to borrow the biggest fossil flower preserved in amber ever found.

“I did it without any expectations, I just did it because I was curious,” she said.

Her curiosity pulled the thread of a more than 150-year-long case of mistaken identity, resulting in a clearer picture of what the Baltic amber forest of Northern Europe looked like more than 33 million years ago. 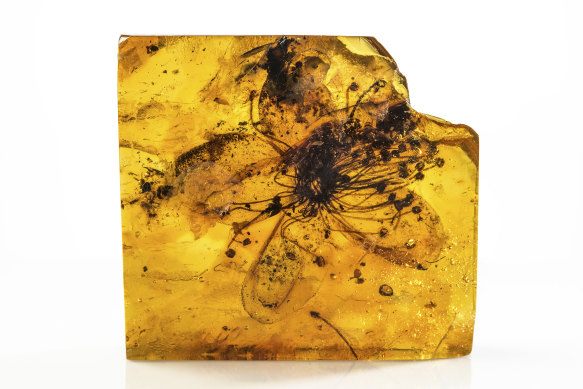 The largest-known fossilised flower to be preserved in amber. A study of the Baltic specimen offers new insights into what Europe’s climate was like some 35 million years ago.Credit:Museum für Naturkunde Berlin/The New York Times

The preserved flower bloomed about halfway between the extinction of the last non-bird dinosaurs and the evolution of humans who found it in the 19th century in territory that is now part of Russia. In 1872, scientists classified it as Stewartia kowalewskii, an extinct flowering evergreen.

The Baltic amber flower’s identity hadn’t been revised until Sadowski’s paper in Scientific Reports was published on Thursday.

Plants in amber are a rarity. Among Baltic amber specimens, only 1 to 3 per cent of trapped organisms are botanical. This might result from a bias towards animals by amber collectors, but it also might be because animals wander into pools of sticky resin while plants have to accidentally fall in. 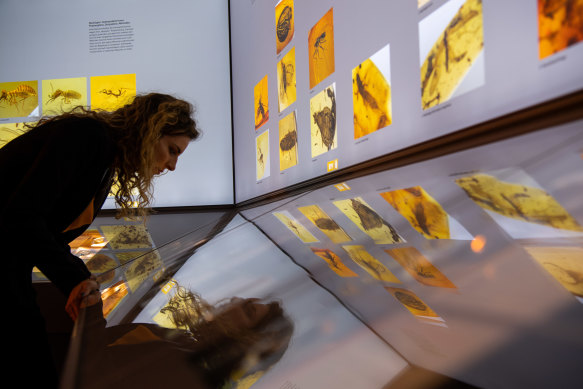 A woman looks at the large national exhibition “Life in the Amber Forest” in the Natural History Museum in Stuttgart.Credit:Getty

While they’re harder to come by, plants in amber provide paleobotanists with a wealth of information, Sadowski said. Amber, which forms from tree resin, preserves ancient specimens in three dimensions, revealing “all the delicate features that you normally don’t get in other fossil types”.

The flower that caught Sadowski’s eye was 2.5 centimetres wide – three times bigger than the next-largest blossom preserved in amber ever discovered. A colleague had told her of the flower’s “massive” size before she sought it out, and she wondered if he was exaggerating. He wasn’t. She then decided to see what 150 years of technological advances might be able to reveal about Stewartia kowalewskii.

Once she had the fossil flower in hand, Sadowski polished the amber block with a damp leather cloth and toothpaste – a technique she picked up from her doctoral adviser, Alexander Schmidt, who learnt some of his methods from a dentist.

Under a powerful microscope, Sadowski saw perfectly preserved details of the flower’s anatomy, along with specks of pollen. She used the pollen to see if the plant had been sorted into the correct family 150 years ago.

Sadowski scraped grains from near the amber’s surface with a scalpel. “I only do that on a very quiet morning in my office, where no one disturbs me. You need steady hands, no shaking,” she said.

After isolating and imaging the grains, her co-author on the study, Christa-Charlotte Hofmann at the University of Vienna, investigated the pollen, along with microscopic features of the flower’s anatomy. That pointed to an entirely different genus group than the one that had been assigned in 1872: Symplocos, a genus of flowering shrubs and small trees not found in Europe today but widespread in modern East Asia.

The redesignation of the giant flower helps to flesh out what scientists know about the ecological diversity of the Baltic amber forest. It also sheds light on how Earth’s climate has changed over the last 35 million-odd years: the presence of Symplocos helps to show that ancient Europe was balmier than it has been for most of human history.

“These tiny grains are natural recorders of past climates and ecosystems that can help us measure how much our planet has changed in the past due to natural [non-human] causes,” said Regan Dunn, a paleobotanist at La Brea Tar Pits and Museum who was not involved with the research. “This allows us to better understand just how much our species is impacting the planet.”

While “Jurassic Park” enthusiasts may be disappointed to learn that there’s no chance of getting DNA from the amber flower, George Poinar jnr, a scientist whose work inspired the series, said there are bound to be more breakthroughs. In the nearly 50 years he’s been studying amber, advances in microscopy have made once-hidden details of ancient organisms dramatic and clear.

“I think that’s fascinating, for people to see life like that,” he said.