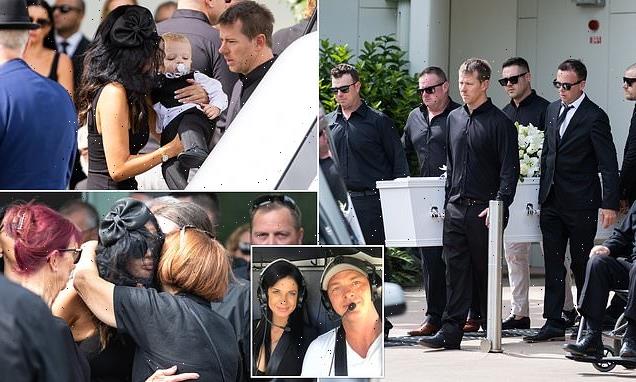 The heartbroken fiancée of pilot Ashley Jenkinson has revealed the last thing they said to each other before he died Sea World’s helicopter tragedy was ‘I love you’.

Hundreds of mourners piled into Southport Church of Christ at 2pm on Friday to say their goodbyes to the father-of-one, 40 – eleven days after he and three passengers where killed when their helicopter collided with another mid-air.

The experienced pilot had just taken off on the joy ride about 2pm on January 2 when his aircraft smashed into a second coming into land over the Gold Coast Broadwater.

Mr Jenkinson’s fiancée, Kosha, and their one-year-old son, Kayden, sat at the front of the church, next to his white coffin, which was adorned with white flowers.

The service began with the pastor telling the crowd they had gathered today to remember Mr Jenkinson’s ‘contagious smile, kind heart, and good humour’, before  Creed’s ‘With Arms Wide Open’ played.

The service heard how Ash was a doting dad and ‘true hero’, who offered his flying services to help people in need of supplies during natural disasters, with a ‘big heart’, and ‘contagious energy’. 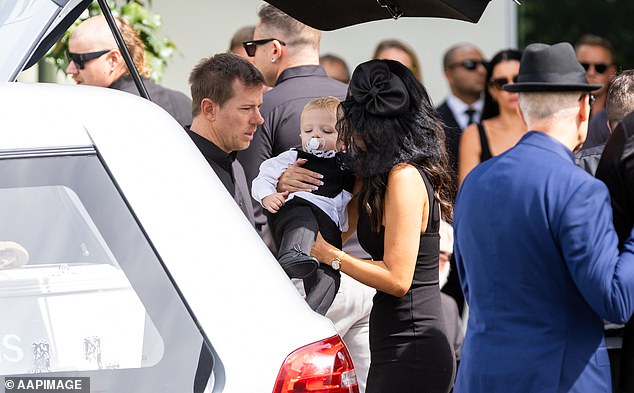 Ashley Jenkinson’s fiancée, Kosha holds their son Kayden as she talks to her brother-in-law Myles 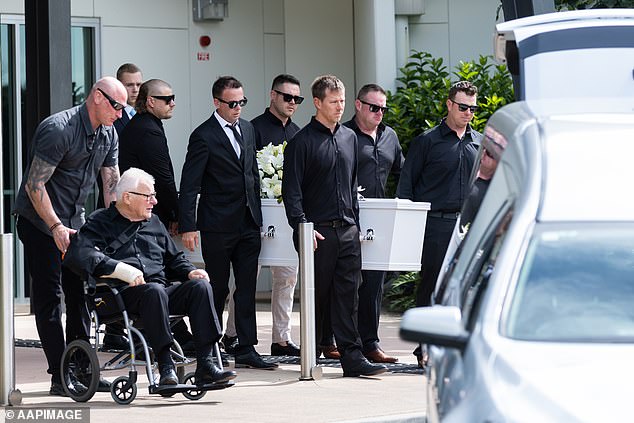 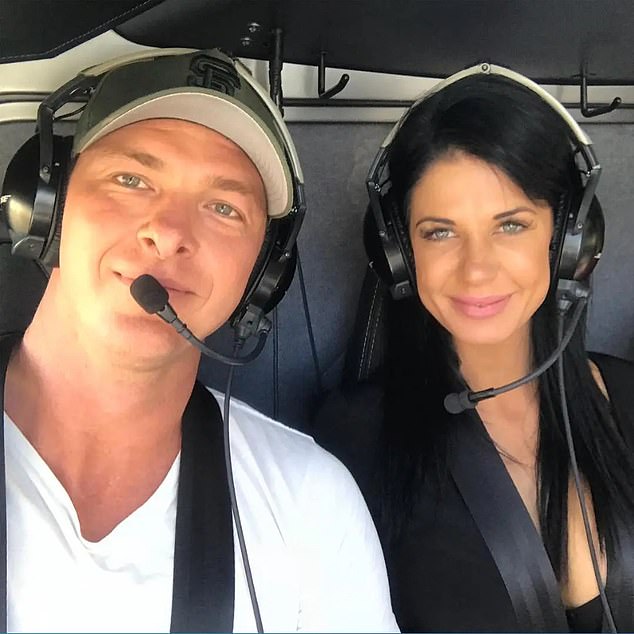 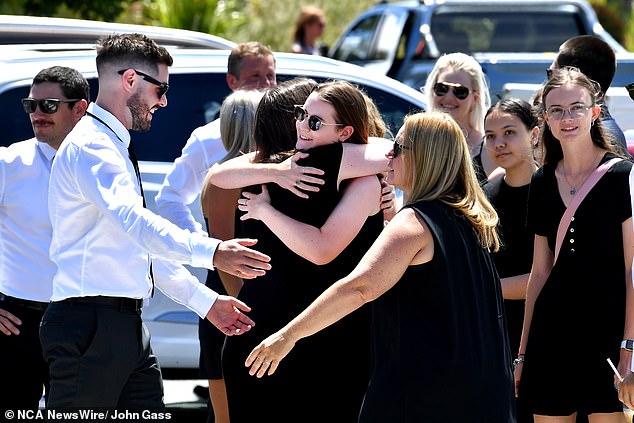 ‘Ash you may be gone, but you will always be remembered. Your memory lives on in the memories who had the privilege of knowing you,’ the pastor said.

‘Rest in peace Ash, your wings were ready, but our hearts were not.’

The pastor read out a speech written by Kosha, recalling how she was introduced to Mr Jenkinson by her friend Kate, who was his housemate.

‘She said “I don’t know if I want to introduce you to my housemate because he will fall in love with you,’ Kosha recalled.

‘He walked up to me and hugged me, kissed me on the cheek, and said “Kate was right. You are beautiful.”‘

‘The second time we met, Ash said “you are as beautiful as I remembered the first time”.’

Kosha said she was going through a tough time when she first met Ash but he, ever the gentleman, would cook for her and drop flowers to her work to cheer her up.

Five years earlier, Kosha said she had seen a psychic who said ‘you will meet a man with a helicopter and he is going to love you forever’. 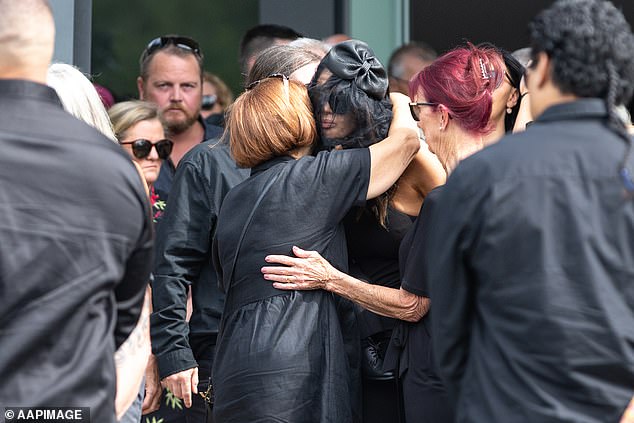 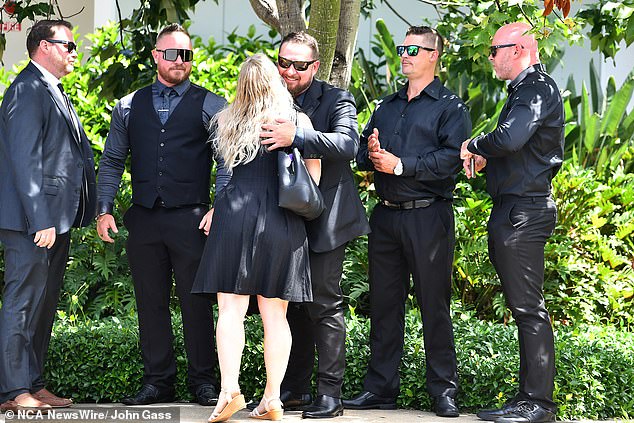 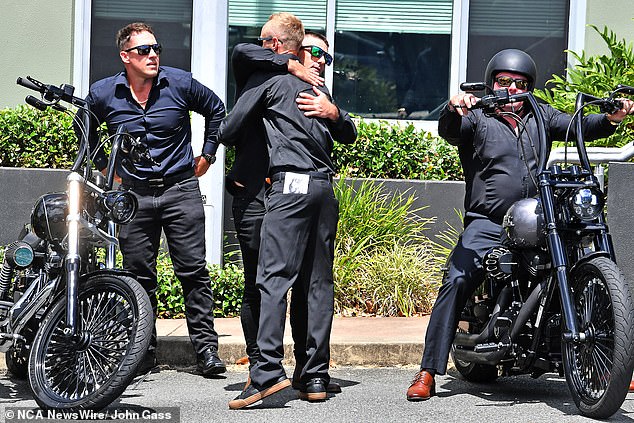 Several men turned up at the funeral service on Harley Davidsons, parking them in a row outside the church 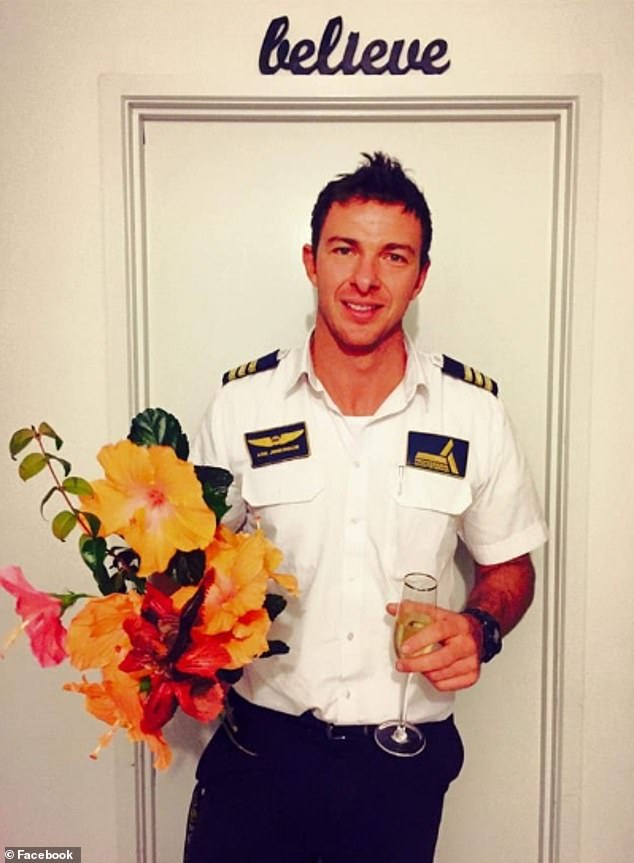 The last time they were together Kosha said she kissed him goodbye like it was the last day they would see each other – a ritual they did every time they parted ways.

She said takes comfort in knowing the last thing they said to each other was ‘I love you’.

Mr Jenkinson’s older and young brothers Myles and Blaze fought back tears as they remembered him as a young boy who would not sit still as he was always ‘tinkering’ on items.

They said his ‘mechanical mind’ saved them when their camper broke down during a road trip adventure when they were younger.

Myles said his brother saw a helicopter while working in a bar in England and it was ‘love or obsession at first sight’, sparking his passion to embark in a piloting career.

‘To say that fatherhood completed Ash is an understatement,’ Myles said, ‘Kayden’s eyes would light up every time he would see his dad.’

‘Not many kids can say they have been in a helicopter. It is a memory we will always share with Kayden so he can remember he was a super hero.’

Myles said that they were inspired to live their lives to the fullest like their ‘strong, fearless’ brother every day.

‘We didn’t get enough time with you, but we will always remember the 40 years of memories,’ Myles said.

‘You were the best brother we could have ever wished for.

‘You will always be our hero.’ 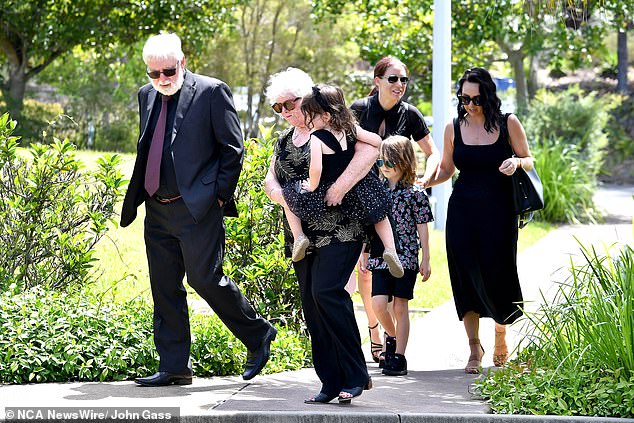 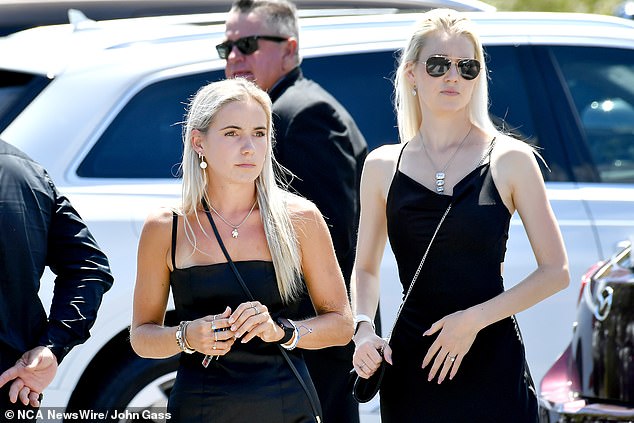 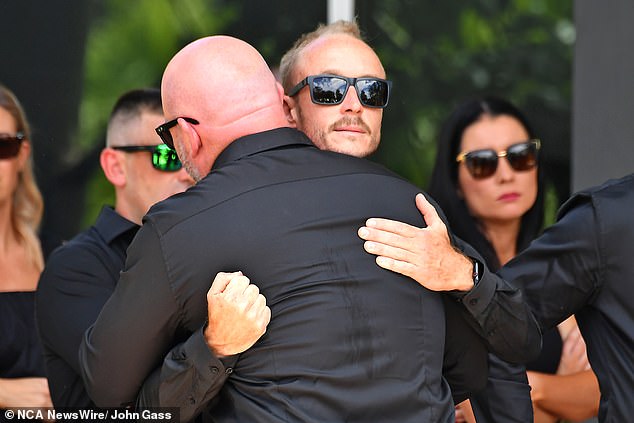 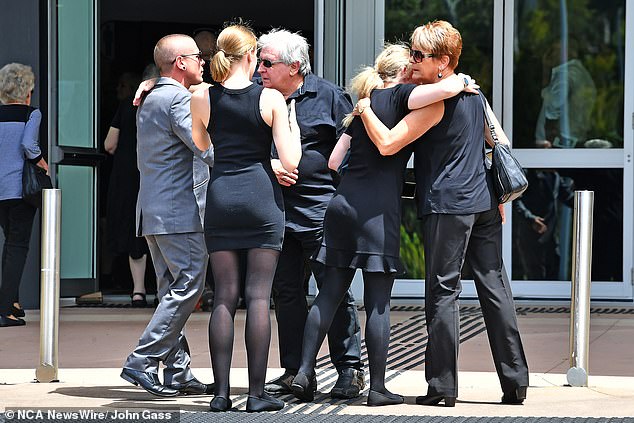 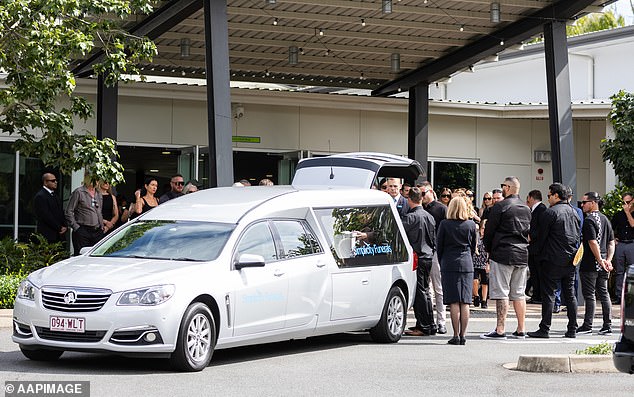 Kayden ran around on stage, clapping and mingling with the guest as the service was in procession.

A photo slideshow showed Ash as a young boy with his brother, flying around the country to help flood victims, proposing to Kosha, and rocking his newborn son.

As the ceremony drew to an end, loved ones carried Mr Jenkinson’s coffin out of the church to the Foo Fighters’ ‘My Hero’.

Mourners peeled out of the church behind them and could be seen embracing as Mr Jenkinson’s coffin was loaded into a car to be taken to his final resting place.

Alongside Mr Jenkinson, British newlyweds Ron and Diane Hughes, 65 and 57, and Sydney mother Vanessa Tadros, 36, were also killed when the helicopter plunged to the ground shortly after takeoff.

The three sole survivors on that chopper – Winnie de Silva, 33, her son Leon, 9, and Ms Tadros’ son Nicholas, 10 – were rushed to hospital with critical injuries. 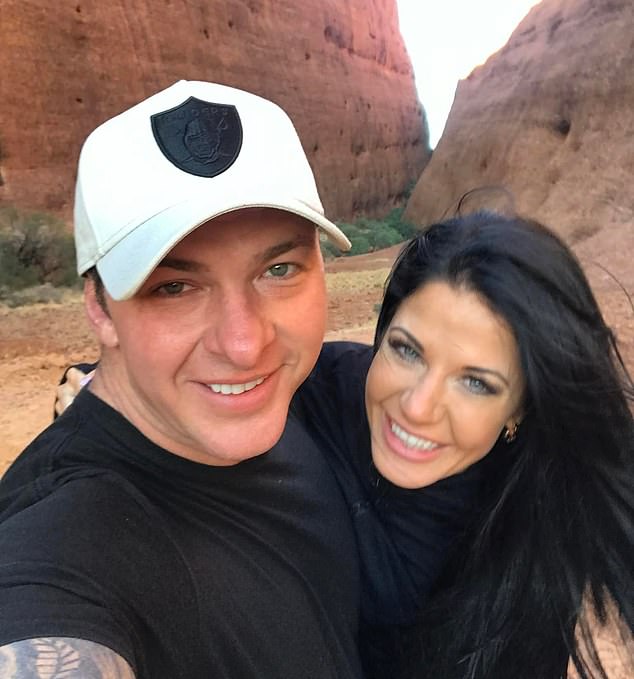 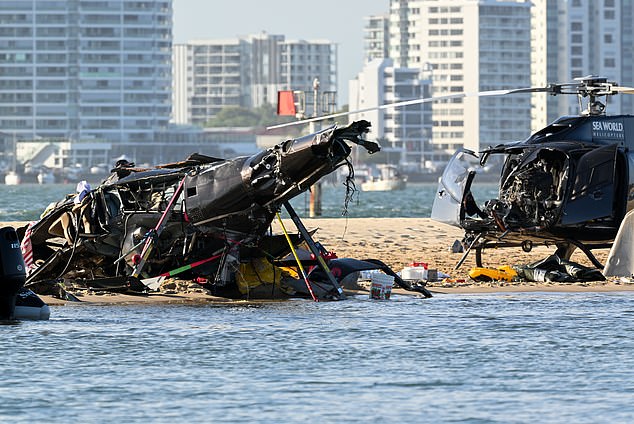 Ms de Silva and her son, who suffered a fractured skull have both since stabilised, while Nicholas has been put on life support in a critical condition.

The second pilot, Michael James, managed to safely landed his aircraft, saving the lives of his five passengers – which included two New Zealand couples and a Western Australian man.

Four of the survivors were hospitalised after suffering injuries from glass shrapnel as the lower helicopter’s rotor blades sliced through the cockpit.

The Air Transport Safety Bureau has launched its investigation into the crash and vowed to look at all possible causes of the accident.

Mr Jenkinson grew up in the West Midlands, in England, before moving to Australia where he had a successful flying career, spanning almost 16 years and

Following Mr Jenkinson’s death, tributes poured in online as devastated friends remembered the Birmingham-born pilot as a ‘top gun’ with a ‘kind-heart’ who delivered much-needed supplies to flood-ravaged parts of NSW in 2022.

‘I knew Ash personally for nine years. He was a fine man and a standout pilot with 6,210 hours of flying to his name,’ Mr Orr-Campbell wrote online. 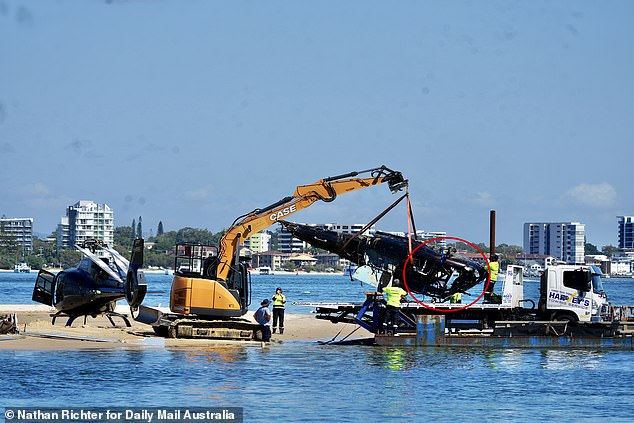 ‘To lose a man and a pilot of Ash’s calibre is shocking in every sense of the word. I, along with all the staff at Sea World Helicopters are gutted to the core. My heart aches as I think of Ash’s fiancée Kosha and his one-year-old son Kayden.

‘I would also like to commend the other pilot, Michael James, who heroically got the second aircraft to the ground safely. We wish him well in his recovery.’

Mr Orr-Campbell revealed Mr Jenkinson had obtained his Commercial Pilots License in June, 2008 and flew choppers in Western Australia until 2011.

‘During this time Ash showed his love and commitment to community – he was involved in multiple search and rescue flights in the area,’ he said.

‘This community mindedness saw him dedicate over 700 hours and many days away from family and friends assisting in firefighting operations across Australia.’

In 2019, Mr Jenkinson became Chief Pilot of Sea World Helicopters and oversaw all aspects of safety and flight operations.

‘RIP Ash, you will forever be in our hearts.’

Sea World Helicopters is an independent offshoot of the theme park close to Gold Coast’s world famous Surfers Paradise, and has operated for more than 40 years.

It bragged of its ‘impeccable’ safety record which it attributed to its ‘experienced pilots and meticulous maintenance regime’.

Prior to Covid hitting the tourist industry, the terminal flew up to 600 passengers a day, offering five minute scenic flights or 30 minute trips to hinterland waterfalls and coastal beaches.

In the wake of the pandemic, the firm diversified with trips to local wineries

Chief pilot Ash Jenkinson, 40, who was killed in the tragedy, said the flights offered a once in a lifetime experience to holidaymakers.

‘Day trips flying around to several wineries, who doesn’t want to do that?’ he said in 2021.

‘The Gold Coast is so well known for its golden sands and beach lifestyle, you forget that only a five-minute flight inland you have all these beautiful Hinterland rainforests and massive flyable waterfalls.

‘It’s something our guests will remember for a lifetime and one of my favourite locations in Australia.’

He added: ‘If you haven’t seen the Gold Coast from the air, you’re missing out.

‘The simple flight up and down the coastline, flying past the tall buildings and above the sea, is something you can’t grasp from the ground.’