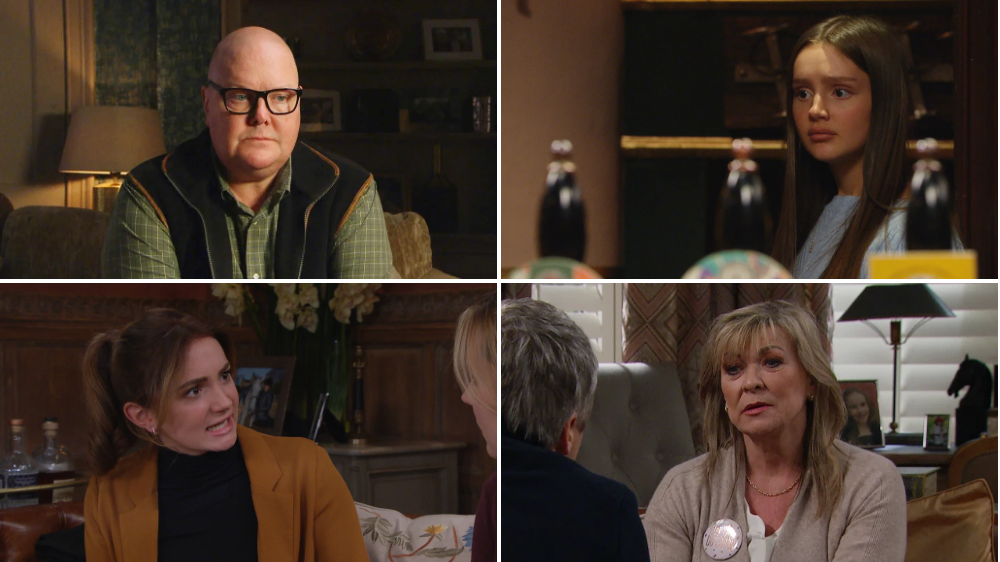 There’s family turmoil aplenty in next week’s Emmerdale, as those trying to fit in risk being left in the cold.

With Chas Dingle (Lucy Pargeter) determined to make amends with the rest of the clan, she seizes upon Mandy’s (Lisa Riley) suggestion of a party.

But things soon get awkward when Paddy Kirk (Dominic Brunt) arrives and he finds himself isolated from everyone as rifts are healed for Chas.

Elsewhere, Gabby Thomas (Rosie Bentham) is out to impress – and she is in a mood to celebrate when she wins over Kim Tate (Claire King).

Jubilant, Gabby shares a bottle with new nanny Nicky (Lewis Cope) but when she moves in for a kiss, she is rejected and feels humiliated.

As it triggers another clash with Dawn Taylor (Olivia Bromley), who has witnessed it, is Gabby about to lose her cherished place in Home Farm.

Here’s the full episode guide for next week.

Desperate to get rid of Chloe and concentrate on his relationship with Charity, Mackenzie reveals to Chloe that he’s paid the deposit on a flat.

Feeling pushed out, Chloe is upset and angry. Neither are aware that from the bar curious Ryan has observed this whole tense exchange.

Kim is impressed by Gabby’s pitch about expanding the business into schools and expects her to deliver on it.

Amy and Chloe make amends as they agree to give being sisters another go.

Gabby’s trying to be confident as she greets Nicola, councillor Colin and guests from local schools.

Nervous Gabby glances over at Kim who doesn’t look impressed by the shaky start to her speech, but resilient Gabby stands her ground when Nicola questions the safety element of the activities on offer.

Gabby urges Nicky to stick around and celebrate with her as she grabs a bottle of champagne. A drunk Gabby takes the plunge and leans in to kiss Nicky but she’s mortified as Nicky jumps to his feet announcing that he doesn’t like her like that.

Chloe’s caught off guard when Ryan asks if Mackenzie is the father of her unborn child. Chloe feigns shock at Ryan’s revelation and decides to cover her tracks.

Ryan reveals he knew about Mackenzie’s one night stand and Chloe makes him feel guilty about choosing Mackenzie’s side over Charity.

Later, stern Chloe urges Mackenzie to stop spiralling because the way he’s acting is getting people suspicious including Ryan. Chloe reassures Mackenzie that she threw him off the scent.

Bernice is furious when Mandy tells her she is going to have to make her redundant from the salon.

When Gabby and Dawn argue about their priorities, Gabby calls Dawn a ‘prostitute’ in front of Lucas, Clemmie and Will.

Dawn is horrified by Lucas’ question and rushes out on the verge of tears, leaving Will furious with Gabby.

Mandy suggests throwing a Dingle bash with the out-of-date beer and Chas sees this as the perfect chance to make amends with everyone.

Later, as the Dingles pile into the bar,  Chas is taken aback to see awkward Paddy arrive. As Chas makes amends with her family members, Paddy is left feeling excluded.

With guilty Marlon otherwise occupied at the buffet, gutted Paddy quietly slips off to the backroom.

As Mandy starts testing the karaoke mic, gutted Paddy feels totally isolated from his once-extended family as he sits listening to them having fun.

Kim wants Caleb to invest in her business.

Bear is concerned about Paddy withdrawing from Eve, and Vinny offers to talk to him.