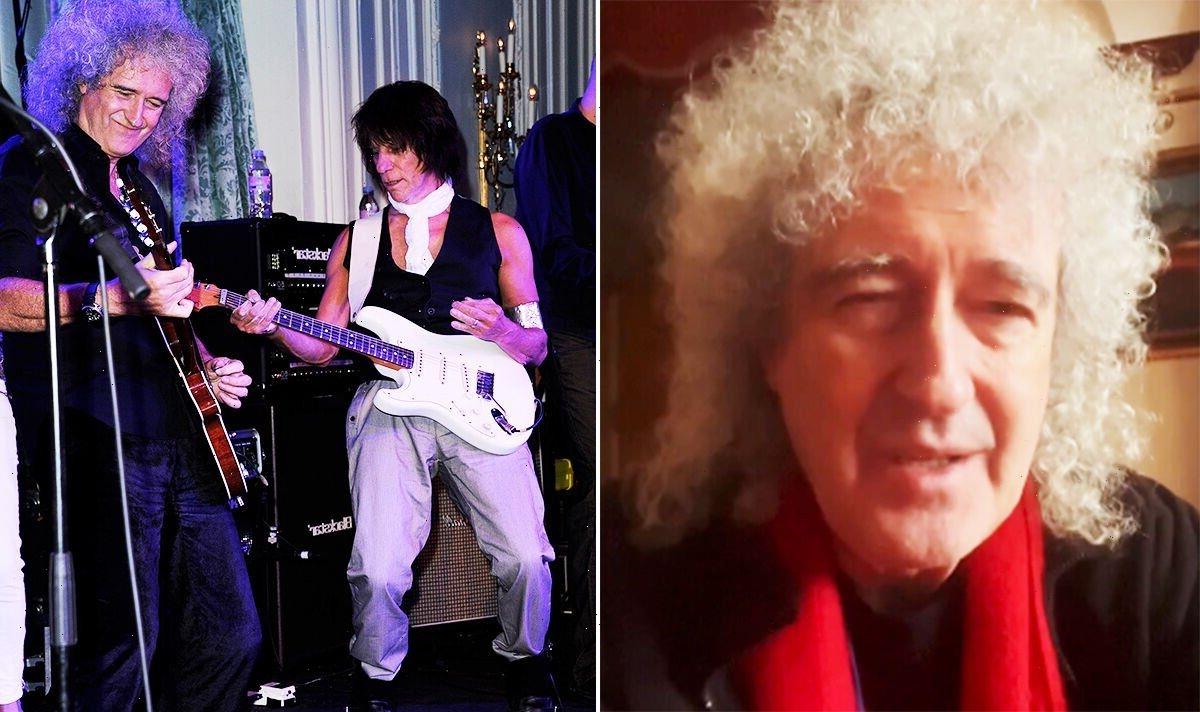 Brian May has posted a couple of tributes to Jeff Beck, who died on Tuesday after contracting bacterial meningitis at 78. Following some pictures together, the 75-year-old Queen guitarist shared a five minute video full of loving memories of his dear friend. He said: “Hi folks, I guess I’m struggling today… I don’t feel up to talking to the press and media about it. I don’t feel ready. This is such an extraordinary loss and he was such an extraordinary person. It’s hard to process that he’s not here anymore…Jeff was completely and utterly unique and the kind of musician who’s impossible to define. I was absolutely in awe of him. He was only a couple of years older than me and came from the same area where I came from. But he was a hero to me all along, doing things I dreamed of doing when I was at school even…a major, major inspiration to me to try and give myself a voice the way he had.” Brian then recommended one of the late star’s “beautiful” tracks for fans to go and listen to right now.

Brian said: “If you wanna hear his depth of emotion and sound and phrasing and the way he could touch your soul, listen to Where Were You off of the Guitar Shop album…just sit down and listen to it for four minutes. It’s unbelievable. Possibly the most beautiful bit of guitar music ever recorded. Probably alongside Jimi Hendrix’s Little Wing. So sensitive, so beautiful, so incredibly creative and unlike anything you’ve ever heard anywhere else. Of course, he had his influences too, but he brought an amazing voice to rock music which will never ever been emulated or equalled.”

The Queen guitarist grew up in the same area of Greater London as Beck, being in total awe of him, something he never grew out of.

Brian remembered: “Yeah, he came from my area, so he was like a local boy. I saw him play so many times, always with my jaw on the ground thinking, ‘How does he does that?’ I often think it must have been like being around Mozart and seeing an incredible genius at work and wondering where he could possibly come from. How could he be that great? And if you were with Jeff, if you were around his house, he’d come out of his garage having been under one of his cars for the last few hours, his fingers all covered in grease and muck and looking like he’d just crawled out of a ditch from somewhere. And then he’d pick up a guitar and this beautiful, beautiful sensitive music would come out.

“I think I was very shy, I didn’t know how to talk to him. I couldn’t quite follow him. He wasn’t an easy person for me maybe because I was in so much awe of him. But I was never at ease. And I wrote a song about him called The Guv’nor for one of my solo albums and he came over to my place here in the studio and played with me. We had a laugh and he played some incredible stuff and again my jaw dropped. I couldn’t really pick up a guitar when he was in the room, because he was so incredible. I just wanted to watch and listen. So he played on the track and was like, ‘Yeah whatever’. I don’t think I could ever put into words exactly how much I did revere him. I hope I gave him the picture, but I don’t know if he knew. But I feel like I wasn’t a good enough friend to him and that’s one of those things that happens I suppose. Particularly in this case, I feel there were so many times when I could have rung him up and I wish I had, to be a proper friend.”

Brian added: “But Jeff Beck is so unique, so influential on every guitarist I’ve ever met in life. The loss is incalculable. It’s so sad not having him in the world anymore. I still can’t quite compute it in my head. So this is as far as I can get at the moment I’m afraid. But I was listening last night to my old Yardbirds albums, which is the first time when he started to put out there what he could do… My god, when you get to the solo in the original Yardbirds version of Shapes of Things, it’s like something takes off like a space rocket. No one had ever heard something like that before. Instead of the guitar sounding like a guitar, it sounded somewhere between a sitar and a strange wind instrument. Just listen to it. Blew my mind at the time. It was one of the major things that made me want to play guitar… and take it up as a career. But that will always, always stick in my mind. He was wild. He was unquantifiable and extraordinarily difficult to understand. One of the greatest guitar geniuses the world has ever seen and will ever see. God bless you Jeff. Miss you.”