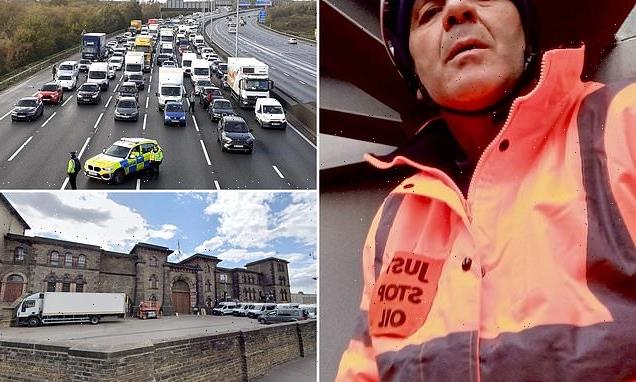 A Just Stop Oil protester who was jailed for six months for causing hours-long tailbacks on the M25 has complained of the ‘tough regime’ of prison life.

Jan Goodey, 57, said he has witnessed lots of ‘hecticness’ [sic] and fighting while behind bars, including pools of red on the floor following a ‘bloodbath’ in one of the cells.

The Kingston University lecturer was handed a six-month custodial sentence after climbing a gantry at Junction 16 over the M25 near Uxbridge in west London on November 7 last year.

He admitted causing a public nuisance just weeks after being let off with a conditional discharge for blocking a road in a similar stunt earlier in the year.

It comes as Just Stop Oil has refused to rule out disrupting King Charles’ coronation and the UK’s local elections later this year – and may target strike days amid plans to ramp up its protests. 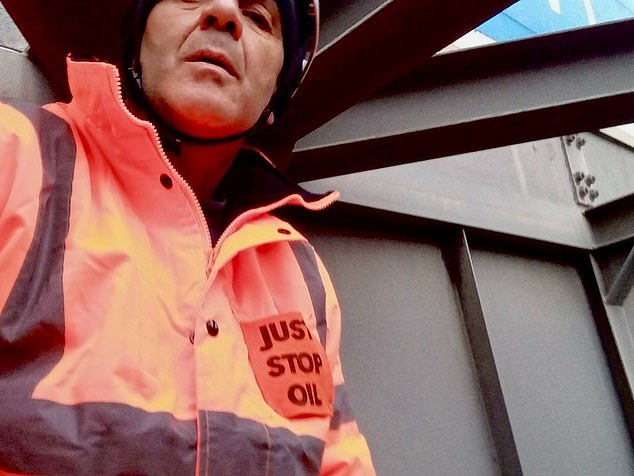 Jan Goodey (pictured during a protest), 57, said he has witnessed lots of ‘hecticness’ [sic] and fighting while behind bars, including bloody puddles on the floor following a ‘bloodbath’ in one of the cells 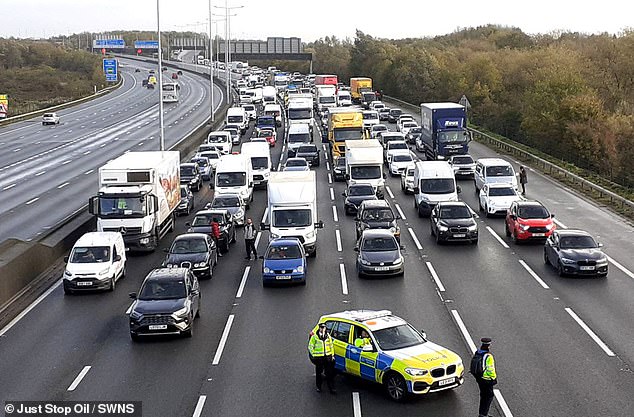 The Kingston University lecturer was handed a six-month custodial sentence after climbing a gantry at Junction 16 over the M25 near Uxbridge in west London on November 7 last year. He admitted causing a public nuisance (Pictured: Tailbacks on the M25 in November during disruptive Just Stop Oil action)

Writing in his Just Stop Oil blog from inside the Category B prison HMP Wandsworth, in south London, Goodey bemoaned that he was not allowed out of his cell much at the start of his sentence.

Goodey, of Brighton, wrote: ‘Banged up in Wandsworth D Wing is a tough regime.

‘Lots of hecticness, lots of fighting, lots of blood. On a walk to my visit yesterday, I spotted a bloke in white overalls and cleaning gear.

‘Looking down from the fourth floor, I could see all the blood pools on the floor. Apparently the cell was a bloodbath. Welcome to Wanno.’

He added: ‘But there’s another side to the coin, we get out more now – there are fewer 24-hour bang-ups and more yard time.

‘Usually, I do exercises on the machines. Prison is all about routines – knowing the time by TV shows, by the time hot and cold meals come.’

A JustGiving page has been launched to help Goodey’s family while he is locked up.

On the page, he added: ‘I write from my cell in Wandsworth with deep thanks for your support for my action.

‘This money will help keep the campaigns on the rails and we will continue this uphill struggle no matter the small scale of our victories.

‘Acorns grow into oaks and once small battles are won the war may be in sight.

‘I am now in the final month and it is nice to know people are holding me in their thoughts during times of economic hardship brought on by ill-conceived neoliberal policies.

‘In solidarity with you all – thanking you sincerely, Jan Goodey.’

His friend Claire Brook set up the funding page with the aim of raising £2,500 – which it has already exceeded by £20.

Ms Brook wrote in the fundraiser: ‘Jan was sentenced to six months in prison for his role in causing disruption to the M25 motorway as part of a Just Stop Oil action.

‘Whilst deliberately disruptive, this and similar actions have not caused any harm to any living being – they merely disrupt traffic to draw attention to the far greater disruption caused by the climate crisis. 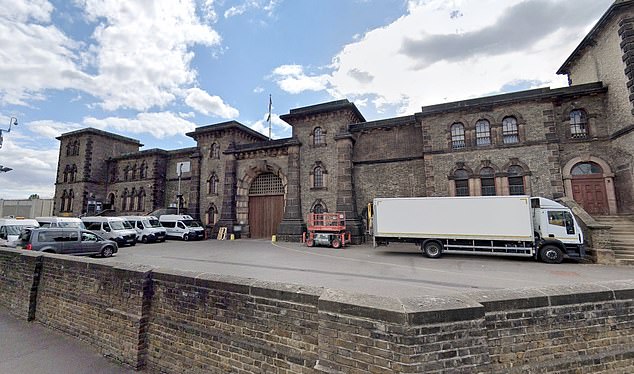 Writing in his Just Stop Oil blog from inside the Category B prison HMP Wandsworth (pictured), in south London, Goodey bemoaned that he was not allowed out of his cell much at the start of his sentence 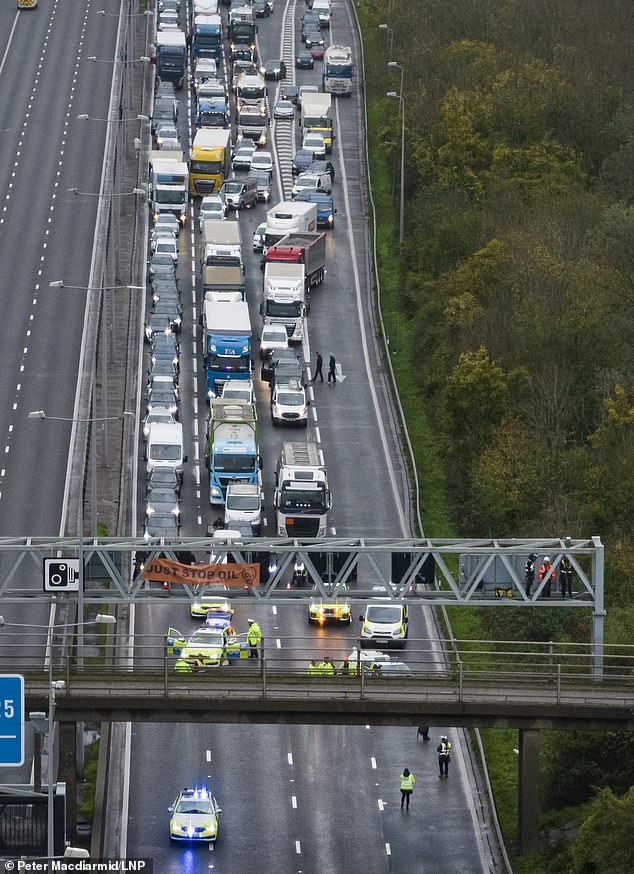 Disruption: One of the stunts by Just Stop Oil on the M25 near Godstone in Surrey on November 7 last year

‘His imprisonment suggests a major erosion of civil liberties in this country which we are deeply concerned about. Protest is a human right and it must be protected.

‘Jan is not the only political prisoner in the UK, but he is the first person to be prosecuted under the new statutory offence of ‘causing a public nuisance’ enshrined in law by the draconian Police, Crime, Sentencing and Courts (PCSC) Act which passed through Parliament this year.

‘He is clearly being used to send a signal to other protestors.’

She added: ‘Jan took this drastic action to raise public awareness of the climate crisis. He has now lost his liberty.

‘Please show your support and solidarity for Jan and his family at this really difficult time.’

At Goodey’s sentencing, the judge said to describe the disruption he caused as ‘significant’ was ‘perhaps an underestimate’, adding that the protest had caused ‘mile after mile of solid traffic on what is almost certainly the busiest motorway in this country’.

He added: ‘On November 7, you deliberately set out to disrupt the lives of individuals doing no more than going about their lawful business. You wanted that motorway to come to a halt on that day.’

The judge told him that his culpability was ‘particularly high’ because ‘you deliberately set out and equipped yourself to cause the disruption that you did’.

It comes as the eco-group has hailed last year a ‘success’ that has led to a ‘significantly increased’ membership and ‘more active members’ after a series of stunts that caused widescale disruption across 2022.

Eco-zealots brought large parts of London and the south east to a standstill after embarking on more than 30 days of continuous protests that included blocking roads in the capital and scaling gantries over the M25 on multiple occasions.

One pair of protesters also suspended themselves from the Dartford Crossing in October, causing more than 36 hours of chaos on one of the UK’s busiest roads. 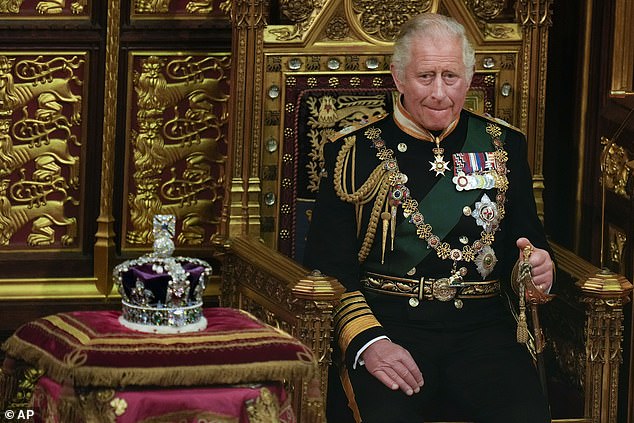 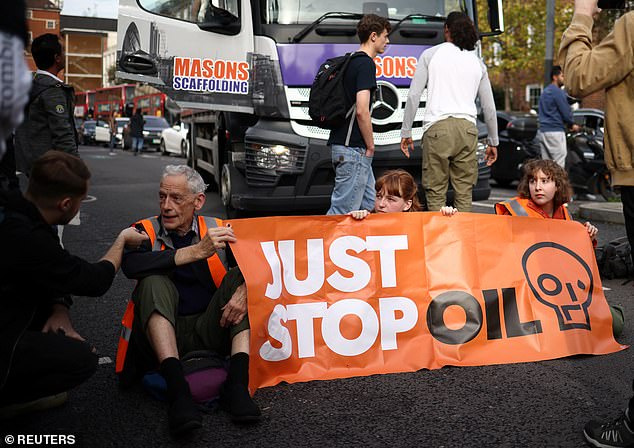 But Just Stop Oil has vowed to go ‘further and faster’ this year.

The group’s spokesperson Alex De Koning told LBC: ‘It is [the plan], indeed]. We are facing the extinction of the human race, why would we slow down now?

‘Unfortunately we are going to have to do more because we need more change and we need it faster.’

Asked whether this would mean an increase in the number of days targeted or a rise in the level of disruption, he said ‘potentially both’.

He added: ‘When two people threw soup at the Van Gough painting, that got more people talking about the climate crisis than when 33 million people in Pakistan got displaced because of the floods.’

Mr De Koning also said the group is exploring a new tactic of targeting strike days, adding that the group is in ‘full solidarity’ with workers taking industrial action.

He has also refused to rule out organising demonstrations to disrupt key events.

This includes the UK’s local elections, due to be held on May 4, and King Charles’ coronation two days later.

But Lord Stephen Greenhalgh, former Deputy Mayor for Policing and Crime in London, said the plans are ‘completely irresponsible’.

He told LBC: ‘There is no step that is too far for them. They are prepared to really ramp up the misery to make a point. Why do they need to mess up all our lives? Haven’t Just Stop Oil done enough damage? 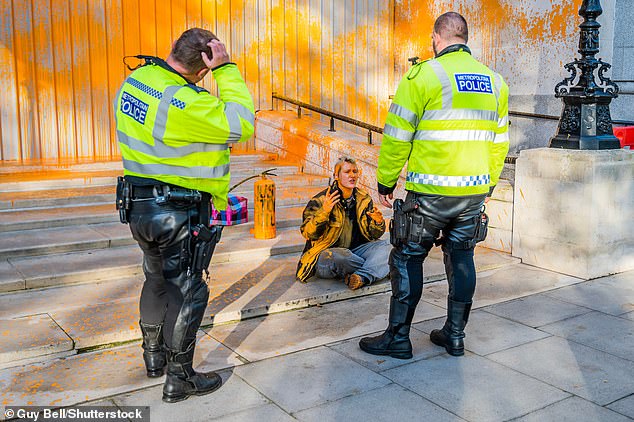 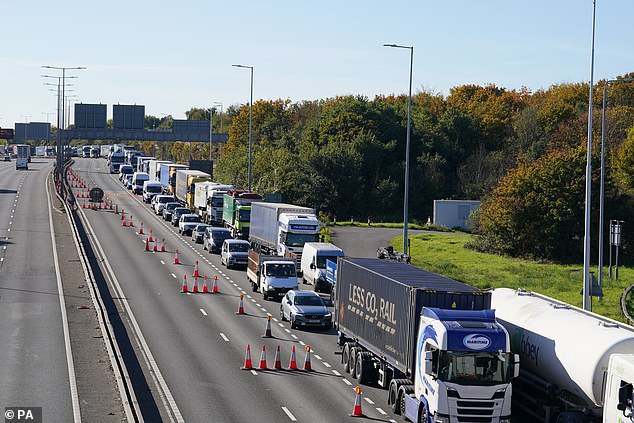 ‘I think it is completely irresponsible. We have got the finest public order policing in the world bar none. The motorways are our arteries, the arteries of our economy, and they need to flow in order for this country to thrive, grow and prosper.

‘Quite frankly, the police should use absolutely every tool in their armamentarium to bring these protesters the book if they cross the line and look to disrupt the lives of others.’

Meanwhile, Rishi Sunak will give police new powers to stop protesters from disrupting traffic in a move seemingly targeting the eco-zealot group.

The Prime Minister said the proposals would be set out in the coming weeks to prevent ‘a small minority’ disrupting the lives of the ‘hard-working majority’.

Mr Sunak had previously promised to give police chiefs ‘whatever they need’ to put an end to the disruptions that have been plaguing the London streets.

Parliament has already passed the Police, Crime, Sentencing and Courts Act and is currently considering the Public Order Bill, which were both intended to restrict disruptive protests.

However, Downing Street suggested there could be additional powers and greater clarity for police. 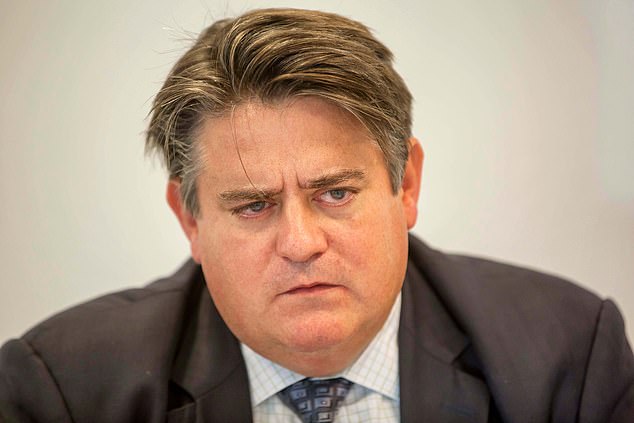 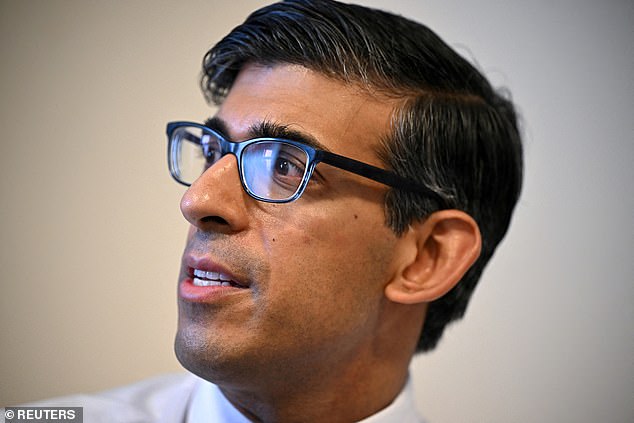 The public has been urged to avoid calling 999 during today’s strike with health leaders fearing it will leave the health service in an even worse position than the December walkouts.

Up to 25,000 paramedics and support staff – including call handlers – are walking out across the country for the second time this winter in an ongoing dispute over pay.

The GMB union, one of two behind today’s strike, said that lives were being put at risk in the NHS ‘every single day’ by current staffing levels and not just as a result of strike action.

And while major strike action on Britain’s railways has finally wound down, there will be further walkouts in a number of industries in the coming week, with driving examiners and school workers all set to hold industrial action, too.