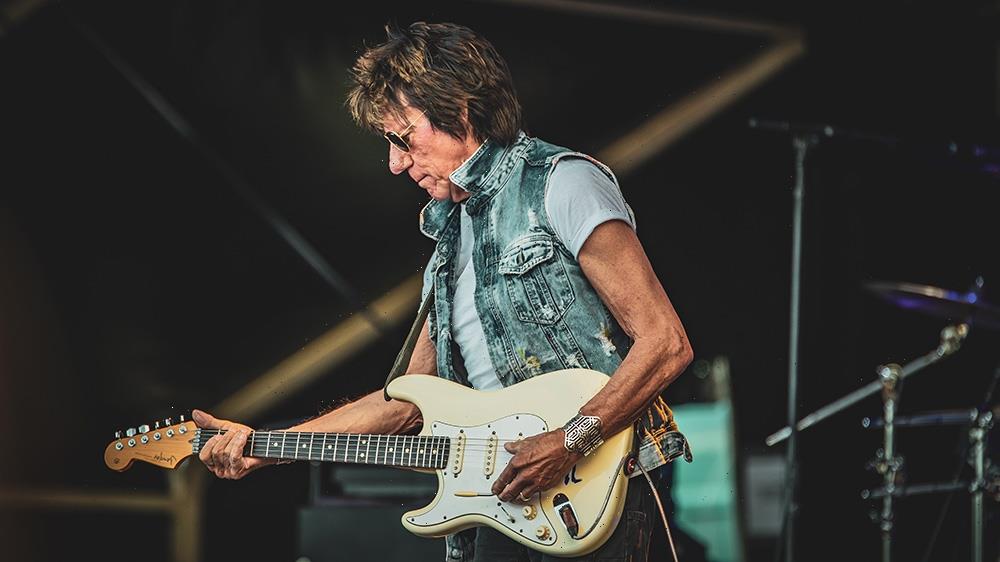 Jeff Beck, among the most innovative and certainly the most unpredictable of ’60s guitar heroes, died on Tuesday. He was 78.

“On behalf of his family, it is with deep and profound sadness that we share the news of Jeff Beck’s passing. After suddenly contracting bacterial meningitis, he peacefully passed away yesterday,” reads a statement from his rep. “His family ask for privacy while they process this tremendous loss.”

He received seven Grammys for instrumental performances, and an eighth for his 2009 work on Herbie Hancock’s “The Imagine Project.”

A fleet, imaginative soloist, Beck brought formidable instrumental firepower to British band the Yardbirds, which he joined in 1965 as a replacement for Eric Clapton. Entirely at home with the group’s blues roots, he burnished their pop hits with an adventurous and virtually unprecedented use of feedback, sustain and fuzz.

After a precipitous exit from the Yardbirds — where he had been joined by another future guitar star, Jimmy Page — he established his own band, the Jeff Beck Group, which was fronted by vocalist Rod Stewart, soon to become a solo star. The unit proved as unstable as it was powerful, and lasted for just two albums.

During the ’70s, Beck assembled a second, more R&B-oriented edition of his group, and briefly formed a short-lived power trio with bassist Tim Bogert and drummer Carmine Appice of Vanilla Fudge and Cactus.

He reached the probable apex of both his critical and commercial success with a pair of mid-’70s all-instrumental albums, “Blow by Blow” and “Wired,” that found him moving into jazz-fusion terrain. The latter LP was recorded with keyboardist Jan Hammer, formerly of the top fusion act the Mahavishnu Orchestra.

From the early ’80s onward, the temperamental Beck — a notorious perfectionist in the studio and a prickly band mate — would sporadically reappear, retrench, retire and reappear again. His latter-day work ranged from an homage to rockabilly singer Gene Vincent to instrumental sets reflecting the influence of techno, electronica and ambient music.

He was inducted into the Rock and Roll Hall of Fame twice. Acknowledged as a member of the Yardbirds in 1992, he said in a brief speech, “They kicked me out…fuck them!” He entered the hall as a solo performer in 2009.

Beck was born in Wallington, Surrey. He began playing guitar in his teens, on a homemade model (which he constructed in emulation of one of his heroes, the American guitarist-inventor Les Paul). His idols included Gene Vincent’s lead guitarist Cliff Gallup and American bluesmen Buddy Guy and Otis Rush.

Like many young British musicians, he was drawn to blues and R&B, and his first bands — the Night Shift, the Rumbles, the Tridents — all drew from the classic American repertoire. His break came in 1965, when Clapton, impatient with the Yardbirds’ increasingly pop-oriented, experimental bent, exited the group to join John Mayall’s purist unit the Bluesbreakers.

On the recommendation of Jimmy Page, who had declined to quit his lucrative session work for a regular guitar chair, the Yardbirds hired Beck, and almost immediately he began putting his stamp on their sound.

He delivered dramatic solos on several clamorous Yardbirds hits of 1965-66: “Heart Full of Soul” (No. 9 in the U.S.), “I’m a Man” (No. 17), “Shapes of Things” (No. 11) and “Over Under Sideways Down” (No. 13). The band’s ’66 U.K. album “Yardbirds” (familiarly known as “Roger the Engineer,” after the title of rhythm guitarist Chris Dreja’s cover drawing) was a veritable recital of forward-looking guitar technique.

After bassist and musical director Paul Samwell-Smith’s exit in early 1966, Page finally joined the Yardbirds on bass, but he soon switched instruments with Dreja. The Beck-Page iteration of the band lasted a matter of months and produced only two tracks featuring that fearsome twin-lead lineup: the single “Happenings Ten Years Time Ago” and “Stroll On,” a rewrite of “The Train Kept A-Rollin’” penned for Michelangelo Antonioni’s indictment of Swinging London, “Blow-Up.” The Yardbirds appeared on screen in Antonioni’s feature, with Beck destroying his guitar onstage a la the Who’s Pete Townshend.

Billed to Beck alone, the stormy debut album “Truth” (1968) was a forceful brew of hard rock, blues and folk that provided the basic blueprint for heavy metal to come. Its successor “Beck-Ola” (1969), billed to the Jeff Beck Group (with Tony Newman replacing Waller) and featuring two crunching Elvis Presley covers and the searing instrumental “Rice Pudding,” was even more potent. The group, minus Stewart, also backed Brit folkie Donovan on his rocking single “Barabajagal.” But the act proved as volatile a mix as the Yardbirds, and Stewart and Wood left to join the Faces (a reconfigured edition of the mod group the Small Faces) in mid-’69.

After Beck declined an invitation to replace Brian Jones in the Rolling Stones, a fractured skull sustained in a December 1969 car accident put the guitarist’s proposed trio with Americans Bogert and Appice on the back burner. At the turn of the decade, the guitarist founded a new quintet edition of the Jeff Beck Group that leaned heavily on the jazzy keyboard work of Max Middleton. Though the band’s albums “Rough and Ready” (1971) and its self-titled 1972 follow-up performed respectably, they were largely considered inferior to the records produced by the Stewart-Wood lineup.

Freed from their obligations to Cactus, Bogert and Appice joined Beck for tour appearances in 1972. By late that year the unit had been pared down to the power trio Beck, Bogert & Appice. The act issued its lone album in 1973; peaking at No. 12 in the U.S., it featured a hammering rendition of “Superstition,” which had been custom-written for Beck by its author, Stevie Wonder.

Beck next undertook a stylistic about-face that would more or less define his approach for the rest of his career. Parting ways with Bogert and Appice before a sophomore album was completed, he cut an all-instrumental set, “Blow by Blow” (1975), with the Beatles’ longtime producer George Martin. The lean quartet session, a showcase for the leader’s considerable virtuosity, ascended to No. 4 in America and was ultimately certified for sales of a million.

Martin also produced the instrumental sequel “Wired” (1976), which featured appearances by keyboardist Hammer and fusion drummer Narada Michael Walden; it reached No. 16, and prefaced a popular Beck-Hammer tour. The guitarist went on to tour Japan in 1978 with a unit that included former Return to Forever bassist Stanley Clarke. Hammer returned for “There & Back” (1980), another instrumental set that hit No. 21.

During the early ’80s, Beck restricted himself to benefit concert appearances. He returned to the studio in 1985 for “Flash,” a largely instrumental affair produced in part by Nile Rodgers of Chic; the collection contained Beck’s only solo chart single, a No. 48 version of the Impressions’ “People Get Ready” that reunited him with Rod Stewart. The set also produced his first Grammy winner, the rock instrumental “Escape.”

His discography slowed further in the ’90s. After the 1992 soundtrack “Frankie’s House,” Beck issued only “Crazy Legs” (No. 171, 1993), comprising new renderings of Gene Vincent’s repertoire with lead vocals by Mike Sanchez and hot Beck lead work, and “Who Else!” (No. 99, 1999), a collaboration with Michael Jackson’s former guitarist Jennifer Batten.

Neither “You Had It Coming” (No. 110, 2001) nor the non-charting “Jeff” (2003) was a major commercial hit, but both titles contained tracks honored by the Recording Academy.

Beck’s well-received “Emotion & Commotion” (2010), his first album in seven years, became his highest-charting release in 35 years, peaking at No. 11 domestically. At the Grammys the following year, the original “Hammerhead” and a rendition of Puccini’s aria “Nessun Dorma” received awards as best rock instrumental performance and best pop instrumental performance, respectively; the guitarist also took home a best pop collaboration trophy for his work on Hancock’s “Imagine,” with India.Arie.

He is survived by his wife Sandra.