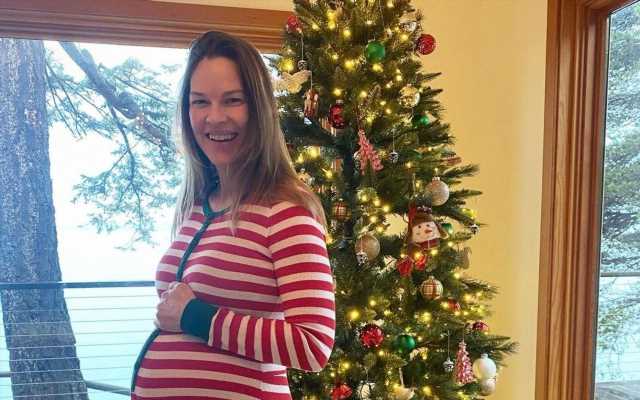 The ‘Million Dollar Baby’ actress reveals her pregnancy craving, explaining that she can’t stop eating fruits as she is expecting twins, her first children with husband Philip Schneider.

AceShowbiz –Hilary Swank has been obsessed with ridiculous amounts of fruit during her pregnancy. The 48-year-old star – who announced in October that she and her husband Philip Schneider are expecting twins together – confessed she has dealt with “a lot of morning sickness” and her “Alaska Daily” co-stars finally understood her bizarre eating habits once she revealed the happy news.

“The first 16 weeks I had a lot of morning sickness, I didn’t do any throwing up, but all I wanted was fruit. [My co-stars] were like, ‘Oh that’s why you eat 10 pomegranates a day, 50 pears,’ ” she told host James Corden when appearing on “The Late Late Show” on Monday, January 9, 2023.

Hilary – who previously revealed her and Philip’s first children are due in April – hailed women as “superheroes” for the work their bodies do bringing life into the world. She said, “I’m feeling pretty full. I love it. I feel like women are superheroes for what our bodies do. I have such – I’m in a whole new found respect.”

The “Million Dollar Baby” actress admitted she misses playing tennis since moving from Los Angeles to Colorado as the high altitude means “the ball flies.”

She also got asked how often she makes it back to LA, and how the commute is – and she revealed her previous mode of transport has become less viable thanks to all of her pets so she’s had to rethink her strategy.

She added, “I have my rescue dogs, my parrots, I have two parrots, five rescue dogs. I got a pilot’s license during COVID and was flying, but it’s like a little prop plane, and it won’t fit five dogs, two parrots and two babies. So now I’m actually looking into buying a retired band bus.”