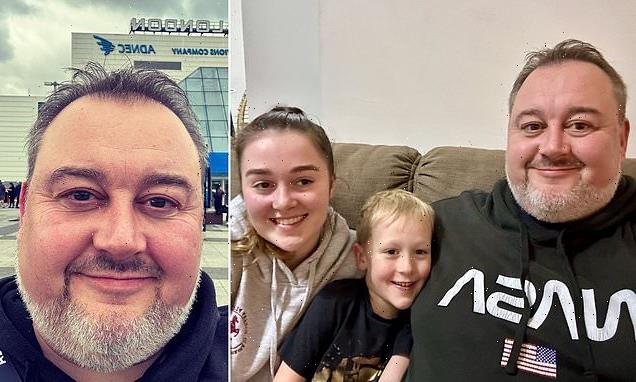 Thrifty father-of-two who organised a ‘free’ Christmas reveals his top tips for cutting down energy bills (including how he makes it fun for his children!)

A super saver father has shared his top tips for cutting down on energy bills as a parent – from using timers to investing in child-friendly heating devices.

In 2017, money saving blogger Al was plunged into £300,000 business debt and was forced to declare bankruptcy.

Ever since, the father-of-two has been on a mission to cut costs – with hacks including living on yellow sticker bargain foods and reusing old tea bags helping him save a staggering £10,000 over the course of two years. 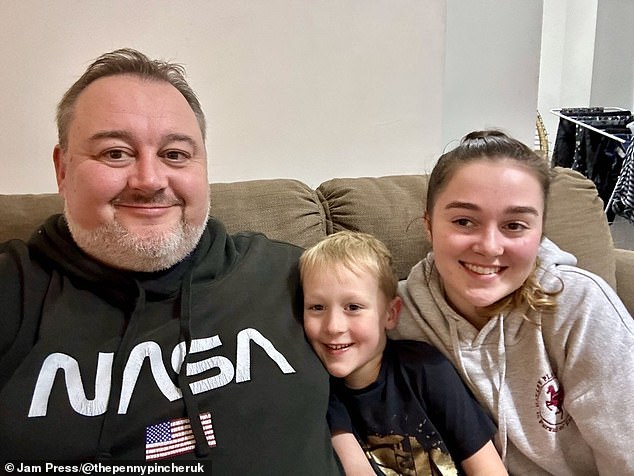 Al Baker, 48, a father-of-two from Aldershot, Hampshire, has revealed his tips on cutting costs and how he encourages his kids to help

Al, who is father to daughter Heather, 20, and son George, five, says having children inevitably leads to higher bills – but he has some thrifty tricks to help cut back.

‘As a parent you have to battle with an inability for a child to grasp the concept that a light switch also turns off a light, as well as just turning one on,’ Al, who runs money-saving blog The Penny Pincher, said.

‘I’ve always tried to teach my kids about the cost of energy and how by making little changes such as turning off a light when you leave a room, and if you are no longer watching TV it can be turned off so as not to waste the power.’

Al has a few top tips for how parents can limit how much they’re shelling out on energy bills every month. 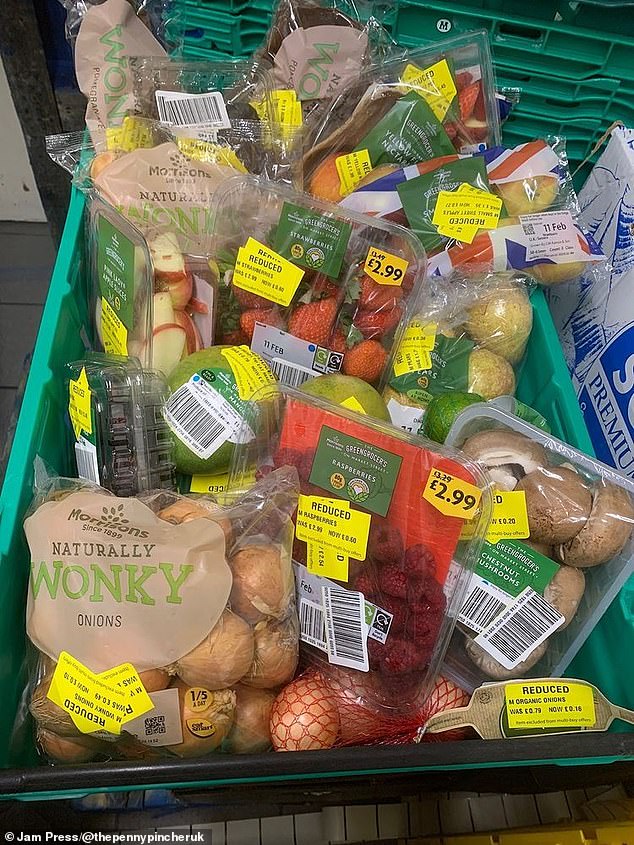 Al managed to save £10,000 over two years, in part by shopping for yellow stamped food

Teach kids the value of money

The father recommends using real life examples to help teach children the value of money in a bid to get them to help cut down on costs.

He said: ‘I showed my son the other day how much heat was produced by our TV and how much power that must use to generate that much heat, and just got a shrugging of the shoulders.

‘So I tried showing him by removing a £10 note from his money box and saying that ‘if you left the TV on all day without watching it, would you be happy for me to keep the £10?’ 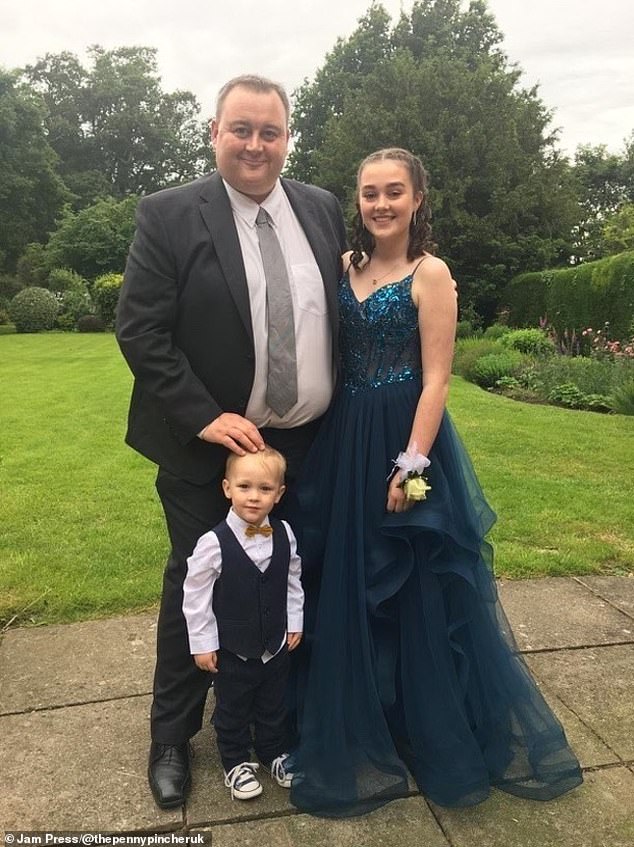 Al, who is father to daughter Heather (right), 20, and son George (centre), five, says having children inevitably leads to higher bills – but has suggested some thrifty tricks to help cut back

‘He said no, and so I said ‘well, by not turning off the TV you might be costing me a £10 note every day, so do you think I would be happy if the TV wasn’t being watched?’ I think he finally grasped it!

‘Kids don’t really understand what goes into earning that £10 as it doesn’t affect them personally so for them it’s quite hard to comprehend.

‘My daughter moved into her first flat this year and now has to be responsible for her own electricity bill, and I really hope the constant nagging from me over the years has drummed into her about being careful about not wasting energy.

‘It’s all about trying to explain it to them without just coming across as a misery or a spoilsport!’ 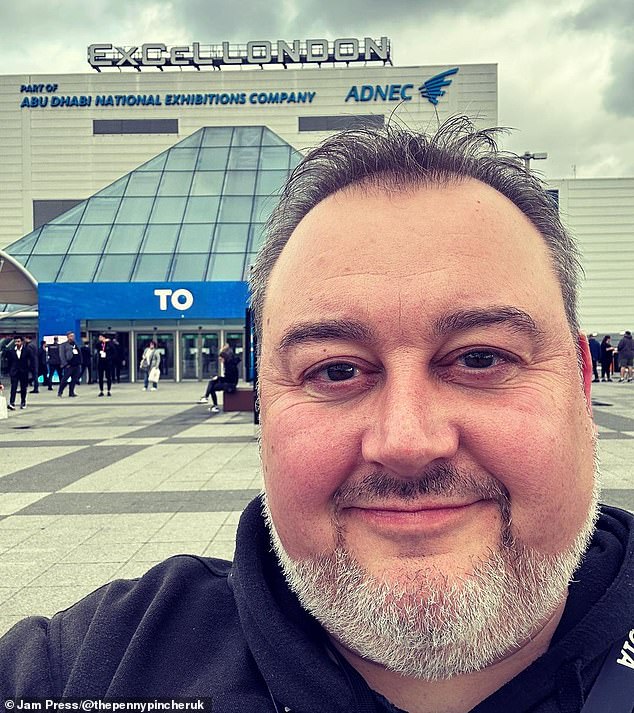 Use timers to cut down on energy use

The thrifty father said: ‘As a bill payer, I’ve been pretty strict with everyone, including my son and partner about energy use, and very much so in the last few months.

‘The nagging about lights being turned off is constant.’

Al recommends using a timer switch to ensure lights and appliances don’t stay on for too long.

He said: ‘I use the app Equiwatt in conjunction with my smart plugs and this app will turn off appliances 12 to 13 times a month for an hour to save energy and save Co2. 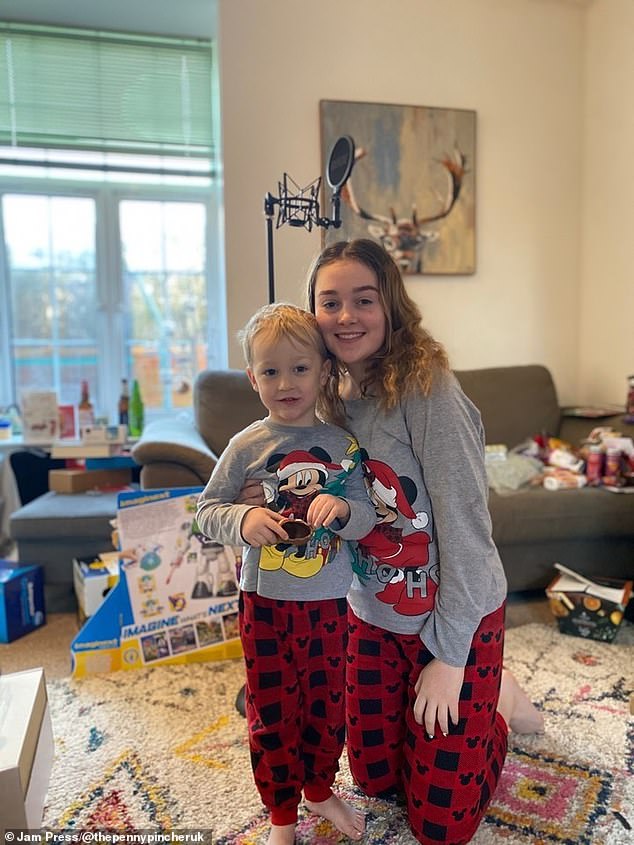 Al’s kids Heather and George pictured in Christmas 2021. Their father says he has worked to teach them the value of money

‘This helps the bills, plus they give you points for doing this which can be exchanged for a gift card, which is an added bonus.

‘I also use the smart plugs to turn off devices overnight that don’t need to be on – for example in one room I’ve set it so that the power turns off at 10pm and goes back on at 7am on the computer monitor, desk light and laptop charger which would otherwise be powered all night, and that’s a saving.’

To avoid relying on the heating in the winter months, Al also recommends a fun method of heating up for kids – investing in a hot teddy over the more traditional hot water bottle.

The teddy bears can be heated up in the microwave, providing a more energy efficient way to warm up without needing to shell out for costly heating.

The father also recommends limiting water usage at bathtime by using bath buoys and dams to limit the amount used in the tub, using a child-friendly shower timer, or having your child pick a few favourite songs and aim to finish washing before the playlist ends.

Mother-of-four, 49, reveals how her yellow-sticker discounted food shopping helped her save ‘thousands’ so she could pay for a family holiday