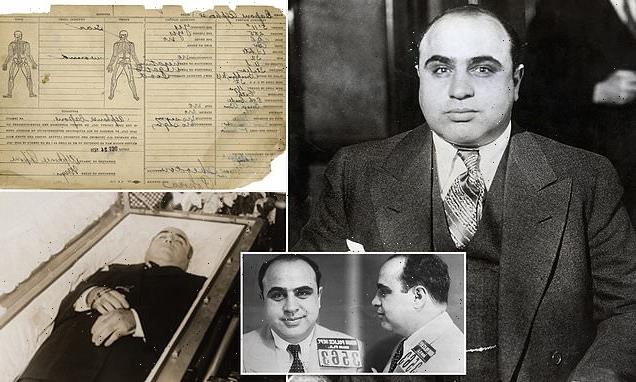 EXCLUSIVE: Newly unearthed medical records reveal how ‘silly and childish’ Al Capone spent final years fishing and gardening at his Miami mansion after his battle with syphilis saw the mobster’s mental age decline to that of a seven-year-old

He is America’s most famous mobster, whose iron grip on the 1930s bootlegging business earned him astonishing riches and a fearsome reputation for brutality.

But Al Capone’s descent from boss of the notorious Chicago Outfit to ex-jailbird also saw his intellectual age deteriorate to that of a seven-year-old, newly-unearthed medical records obtained by DailyMail.com can reveal.

The cause was neurosyphilis – a form of sexually transmitted syphilis that affects the nervous system and destroyed his brain functions so badly that he never regained a mental age of more than 14, the records add.

Capone’s mental collapse is detailed in a letter from Dr. Joseph Moore, who treated him for a year in Baltimore following his 1939 release from Alcatraz after his conviction for tax evasion in 1931. 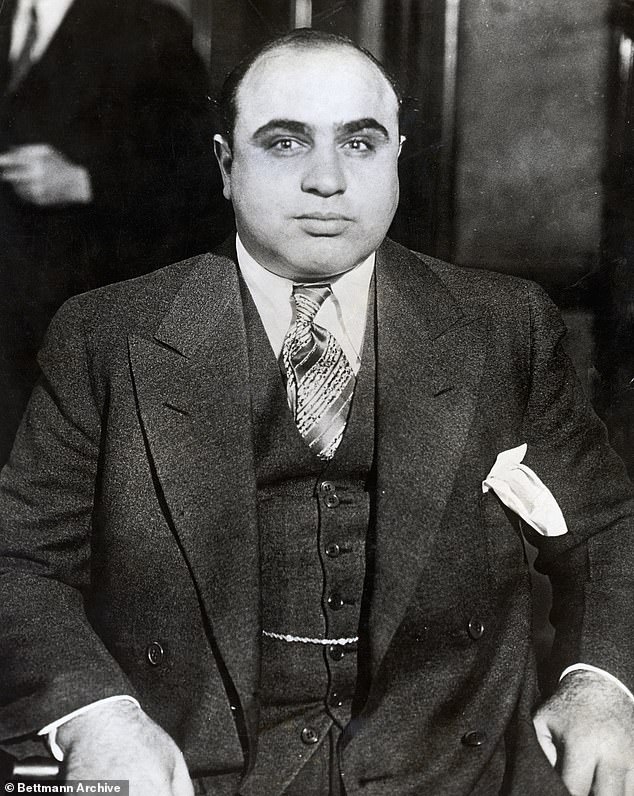 Al Capone’s battle with neurosyphilis destroyed his brain functions so badly his intellectual age at one point plunged to that of a seven-year-old child, newly unearthed medical records show 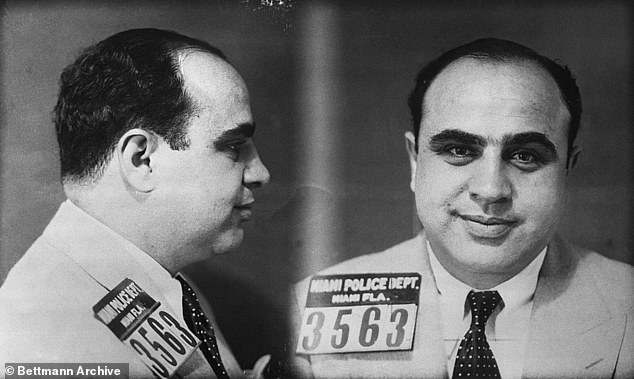 Before the disease took a toll on his mental state, Capone had an iron grip on the 1930s bootleg business. Pictured: A 1929 mug shot of Chicago Mobster Al Capone by the Miami Police Department 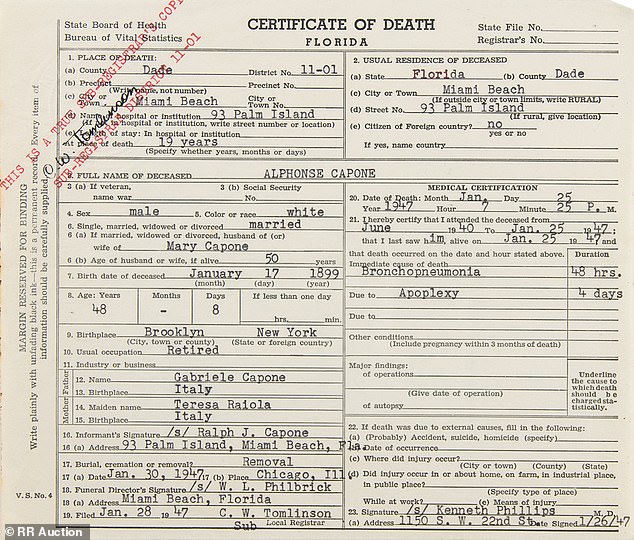 The correspondence on January 15, 1941 was to Dr. Kenneth Phillips, who had taken over care of Capone as he whiled away his final years at his mansion on Palm Island, Miami Beach – and summarized the two medics’ common experiences with ‘the patient.’

It also gives a fascinating glimpse into the battle to keep the ‘silly’ mafioso out of trouble in his ‘retirement’ – including diverting his attention by suggesting he set up a vegetable garden.

The letter additionally reveals how the Brooklyn-born mobster still had big ideas on his release from the notorious island jail in San Francisco Bay despite his mental collapse and stunning fall from power.

Moore wrote: ‘At the time I first saw Mr. Capone in November 1939 his mental condition was characterized by boisterousness, physical and mental over-activity, various grandiose ideas, a marked tendency towards confabulation and mental deterioration (with a Benet-Simon age of seven years), euphoria, and a lack of insight.

‘From the physical standpoint the only discernible neurological abnormalities were in the eyes.

‘At the time he left Baltimore about March 30th, he had improved in a number of respects and particularly his Binet-Simon age had increased from 7 years to 14 years 6 months.’ 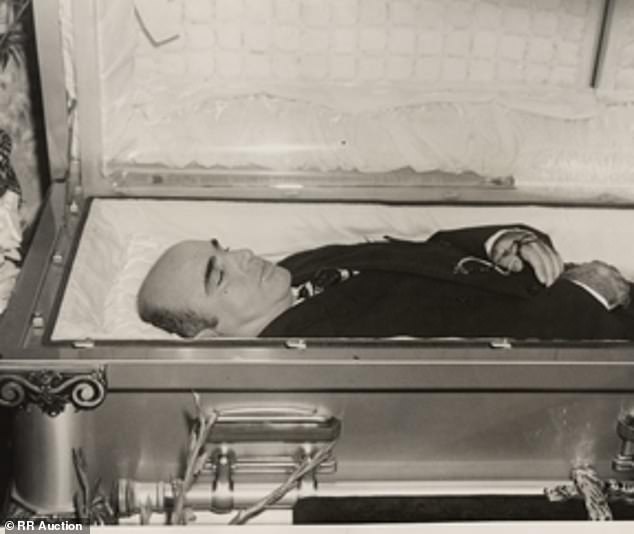 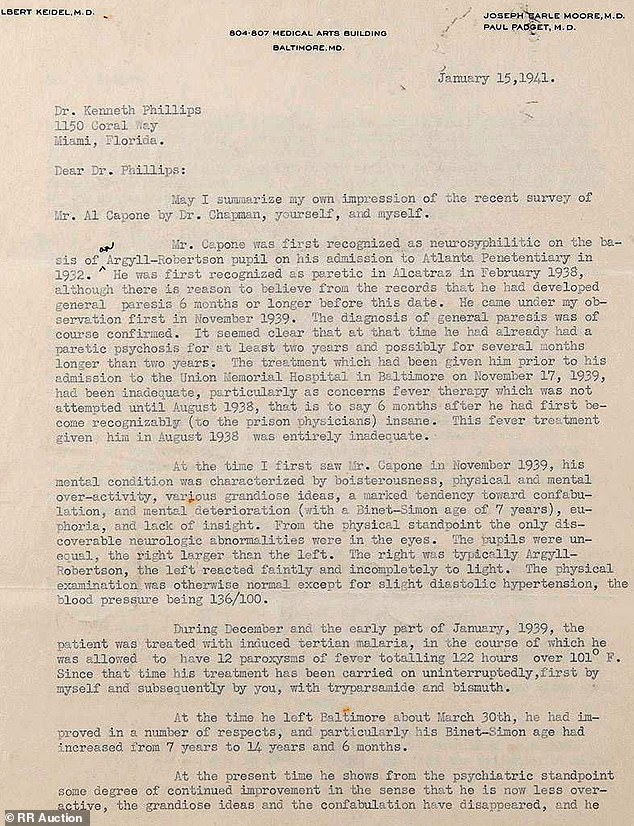 Capone’s mental collapse is detailed in this January 15, 1941 letter from Dr. Joseph Moore, who treated him for a year in Baltimore following his 1939 release from Alcatraz 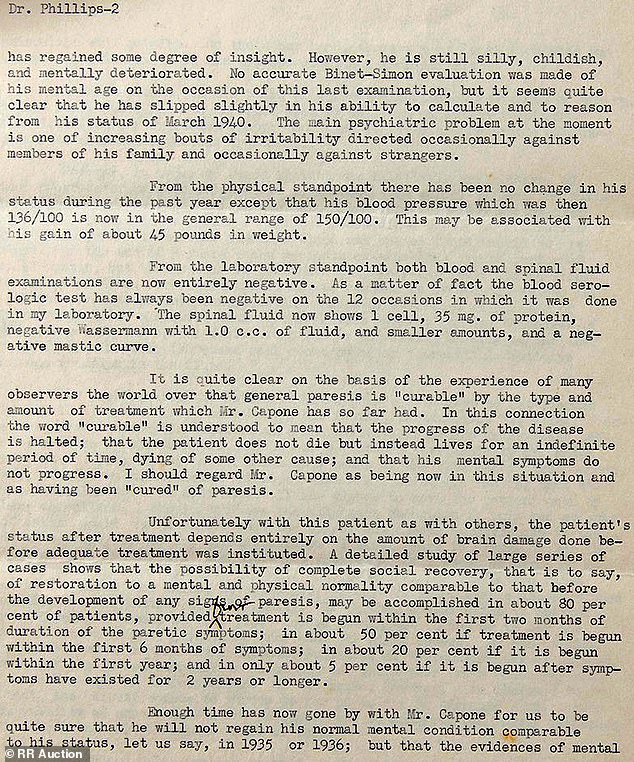 The doctor notes that while Capone showed some ‘degree of continued improvement,’ he was still ‘silly, childish, and mentally deteriorated’ 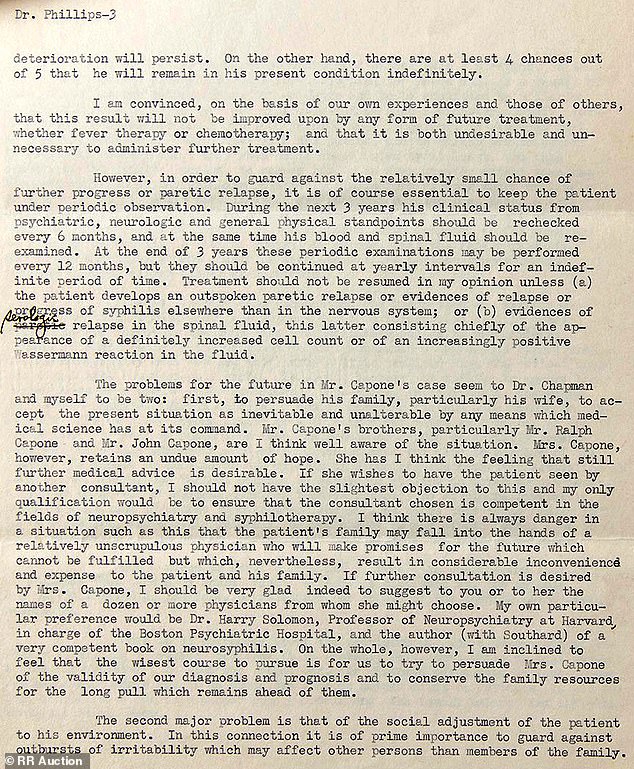 At the time – which was about six years before Capone’s death – Moore speculated that it is very likely the mobster would not ‘regain his normal mental condition comparable to his status, let us say, in 1935 or 1936, but that evidence of deterioration will persist’ 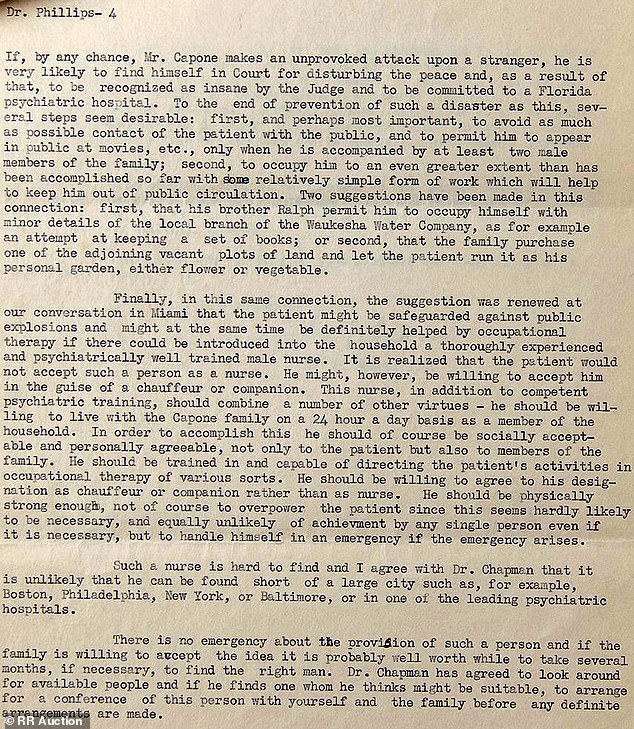 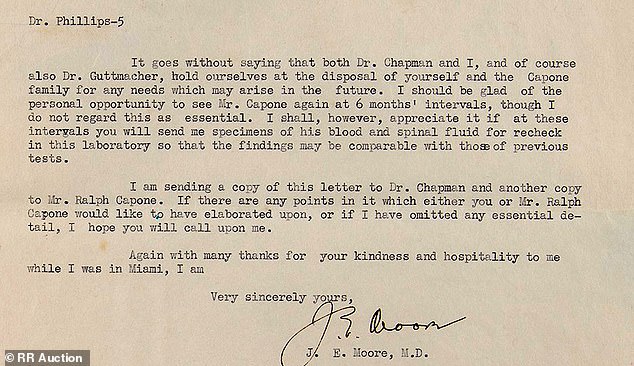 But Moore added: ‘At the present time he shows from the psychiatric standpoint some degree of continued improvement… however, he is still silly, childish, and mentally deteriorated.

The five-page letter is contained in an auction lot of original Capone medical papers and photographs of him in an open casket being sold on January 11 by Boston-based house RR Auction.

Also included is the mobster’s medical record from the last few days and Phillips’s final $277 bill for treating Capone before he finally died aged 48 at his home on January 25, 1947 from bronchopneumonia due to a stroke. The lot is estimated to fetch $50,000.

He spent his days lounging in pajamas, fishing from his pier, and playing cards while long-suffering wife Mae refused to believe that could not recover.

Moore wrote: ‘Enough time has now gone by with Mr. Capone for us to be quite sure that he will not regain his normal mental condition comparable to his status, let us say, in 1935 or 1936, but that evidence of deterioration will persist.

‘I am convinced, on the basis of our own experience and those of others, that this result will not be improved upon by any form of future treatment, whether fever therapy or chemotherapy; and that it is undesirable and unnecessary to administer further treatment.

‘However… it is of course essential to keep the patient under periodic observation.’ 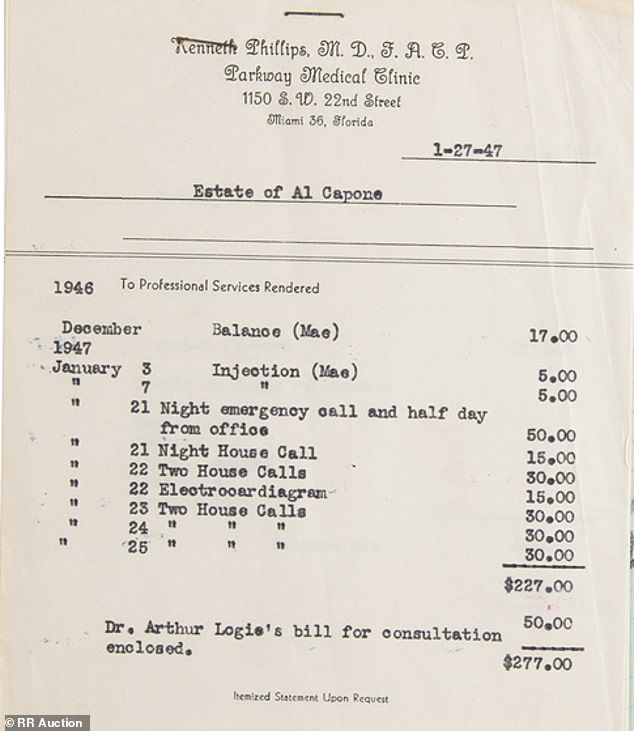 Included in the medical documents for auction are Dr. Phillips’s $277 bill to the ‘Estate of Al Capone’ and made out on January 27, which reveals he charged $50 for the January 21 emergency night call 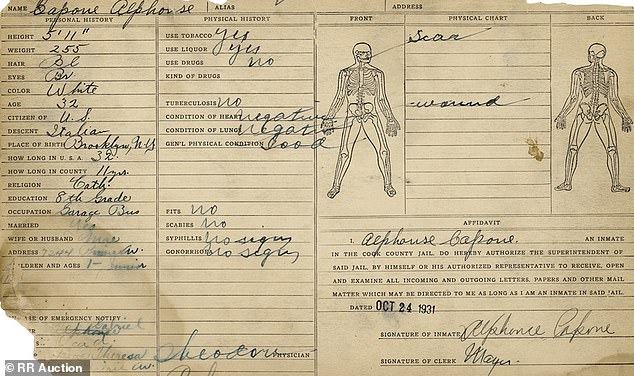 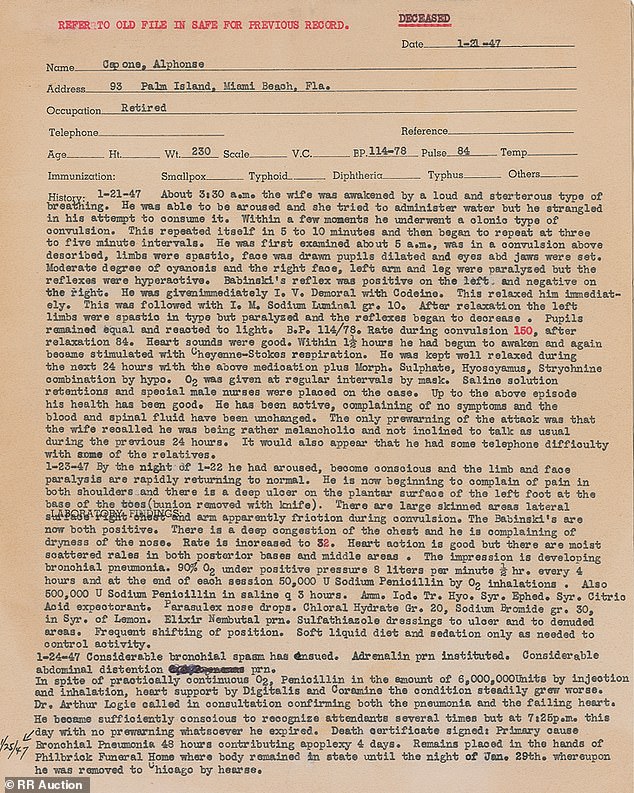 Moore referred to the problem of Capone’s wife, Mae – who lived until 1986 – not accepting his condition as ‘inevitable and unalterable.’

He said Capone’s brothers, fellow bootleggers Ralph and John, were ‘well aware of the situation’ but ‘Mrs. Capone, however, retains an undue amount of hope.

‘She has I think the feeling that still further medical advice is desirable,’ he wrote. ‘I think there is always a danger in a situation such as this that the patient’s family may fall into the hands of a relatively unscrupulous physician.’

But there was also another issue keeping volatile Capone out of trouble.

‘The second major problem is that of the social adjustment of the patient to his environment,’ wrote Moore.

‘In this connection it is of prime importance to guard against outbursts of irritability which may affect other persons than members of the family.

‘If, by any chance, Mr. Capone makes an unprovoked attack upon a stranger, he is very likely to find himself in court for disturbing the peace… and be committed to a Florida psychiatric hospital.’

Moore suggested: ‘To the end of prevention of such a disaster as this, several steps seem desirable: first, and perhaps most important, to avoid as much as possible contact of the patient with the public, and to permit him to appear in public at movies etc., only when he is accompanied by at least two male members of the family.’

The doctor also suggested some ‘relatively simple form of work which will help to keep him out of public circulation’.

This included working with brother Ralph to help keep the books of the local branch of the Waukesha Water Company, a family business. 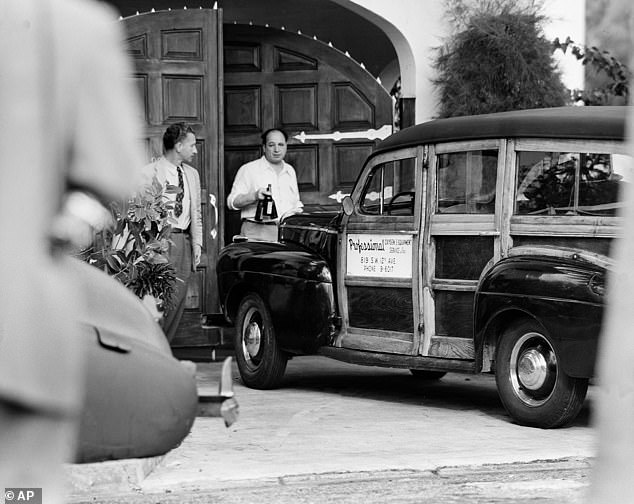 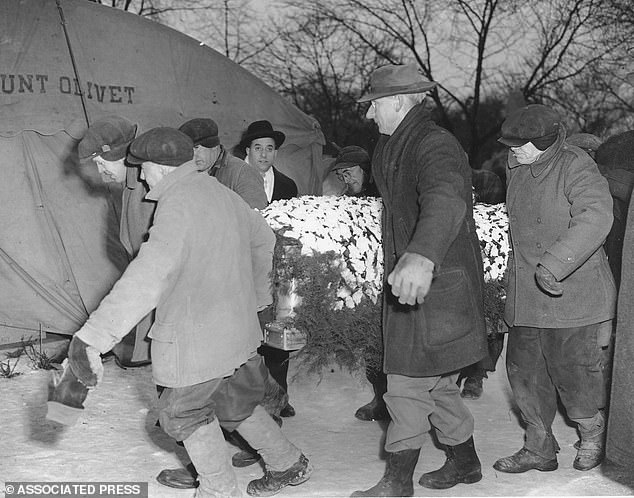 The casket containing the body of mobster Al Capone is carried to its final resting place at Mount Olivet Cemetery in Chicago on February 4, 1947 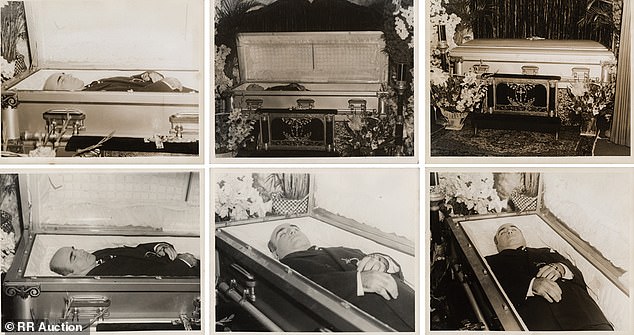 Another was the family buying the lot next to Capone’s home and letting him develop it as a flower or vegetable garden.

A plan to insert a male nurse disguised as a chauffeur was then revealed.

Recalling a conversation the pair had had in Miami, Moore wrote: ‘The patient might be safeguarded against public explosions… if there could be introduced into the house a thoroughly experienced and psychiatrically well trained male nurse.

‘It is realized the patient would not accept such a person as a nurse. He might, however, be willing to accept him in the guise of a chauffeur or companion.’

This person ‘should be willing to agree to his designation as a chauffeur or companion.. he should be physically strong enough.. to handle himself in an emergency.’

At the height of his power before being jailed, Capone held court at his whitewashed 30,000 sq ft Miami Beach compound which he bought in 1928 for $40,000. It comprised a four-bedroom villa and a two-bedroom guardhouse.

He used it to relax, hold lavish parties, and scheme with his goons during breaks from his crime base in Chicago.

But the final few days of his life there were torrid, according to the medical record which is also part of the lot being auctioned.

The document, which gives the occupation of ‘Capone, Alphonse’ as ‘retired’, notes on January 21, 1947: ‘At about 3:30am the wife was awakened by a loud and stertorous type of breathing. 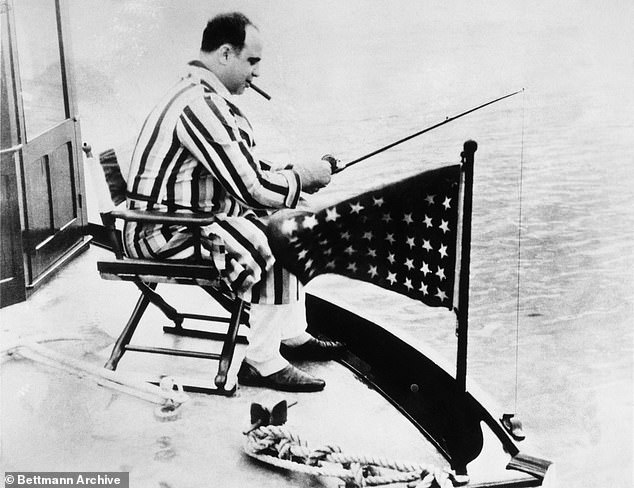 Pictured: Al Capone fishing from a boat. The notorious crime boss spent his final days lounging in pajamas, fishing from his pier, and playing cards while long-suffering wife Mae refused to believe that he could not recover 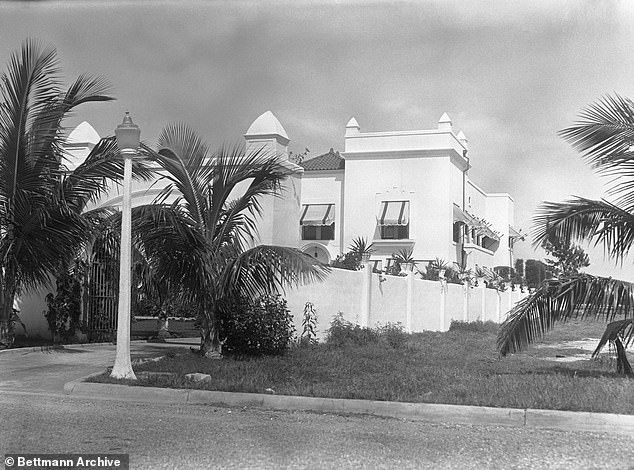 At the height of his power before being jailed, Capone held court at his whitewashed 30,000 sq ft Miami Beach compound which he bought in 1928 for $40,000 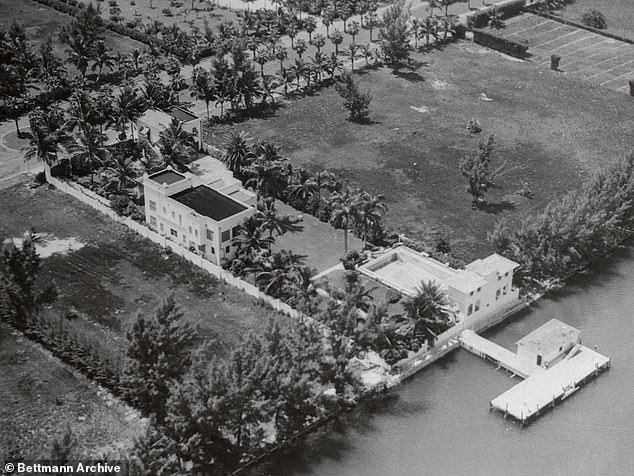 ‘He was able to be aroused and she tried to administer water but he strangled in his attempt to consume it. This repeated itself at 5 to 10 minutes and then began to repeat a three to five minute intervals.

‘He was first examined about 5am and was in a convulsion above described, limbs were spastic, face was drawn, pupils dilated and eyes and jaws were set.’

Capone was treated with morphine and the opioid Demerol with codeine which ‘relaxed him immediately’.

The notes said up to the ‘episode’, Capone had ‘been active and complaining of no symptoms’.

However, by January 24, ‘the condition steadily grew worse’. The next day, the record said: ‘He became sufficiently conscious to recognize attendants several times but at 7.25pm this day with no pre-warning whatsoever he expired.’

The mobster’s death certificate – which lists his mother’s maiden name as Teresa Raiola and his father as Gabriel Capone, both born in Italy – is also in the lot for sale.

Dr. Phillips’s $277 bill to the ‘Estate of Al Capone’ and made out on January 27, reveals he charged $50 for the January 21 emergency night call.

RR Auction is also selling Capone’s signed Cook County Jail inmate record card stamped October 24, 1931 after his tax fraud conviction, for which he was given 11 years but only served eight. The lot is predicted to fetch $100,000. 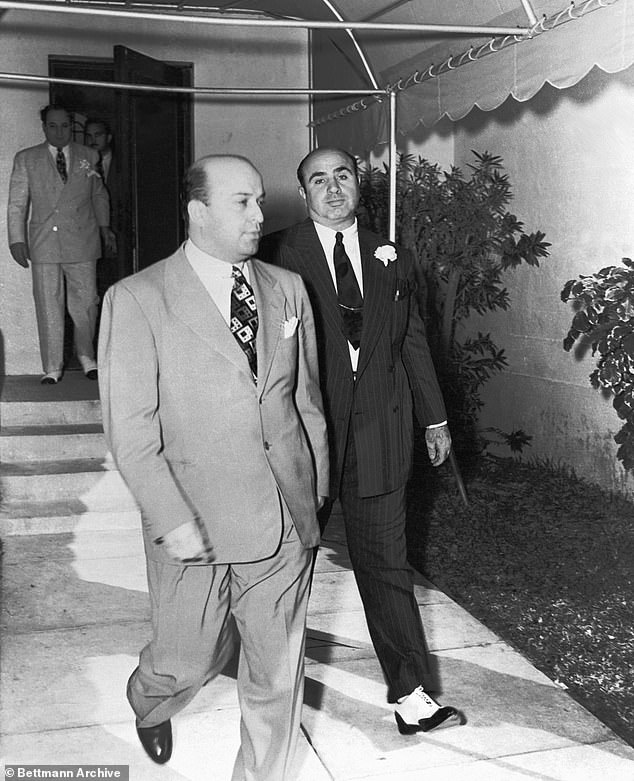 Capone is shown (right), as he left St. Patrick’s Church in Miami, after attending the wedding of his son Albert Francis Capone, to Diana Ruth Casey. The man with Capone was reported to be his bodyguard 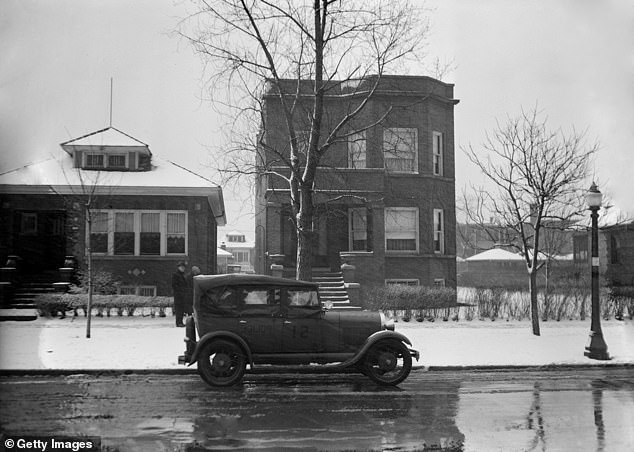 A police car sits outside Al Capone’s house, at 7244 Prairie Avenue in Chicago in 1925 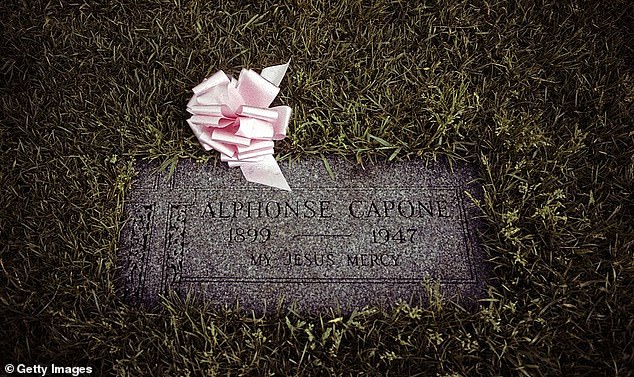 It lists his weight as 255lbs, height 5ft 11ins, descent as Italian, religion as Catholic and education as 8th grade.

His occupation is given confusingly as ‘Garage Bus’, which might have been a nod to the St Valentine’s Day massacre which happened in a commercial garage.

Significantly the card has a drawing of a human that references the scar on his face as well as a wound on his right hand.

It also reports no signs of fits, scabies, gonorrhea or syphilis – despite the belief that he contracted the latter sexually transmitted disease as a young man.

On the reverse, his cell block is given as D and his floor as 5.

‘Several’ previous arrests are noted, including a concealed-carry conviction in Philadelphia.

The sibling – who was branded Public enemy Number Three by the Chicago Crime Commission – was also convicted of tax fraud and served three years. He died in 1974.