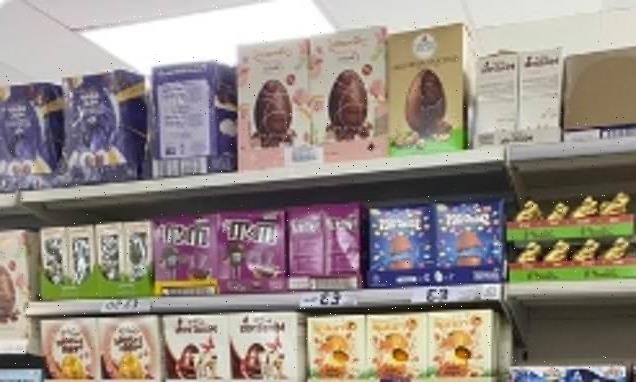 Morrisons stocked up on the chocolate goodies from Boxing Day, with shelf stackers joking that the first boxes were in the warehouse before December 25.

Other supermarkets who have been quick off the mark with the popular treats include Tesco, Asda, Sainsbury’s, M&S and the Co-op.

Easter 2023 lands on April 9, which is still more than 100 days away. Some consumers have been left asking supermarkets to ‘give them a breather’ between holidays. 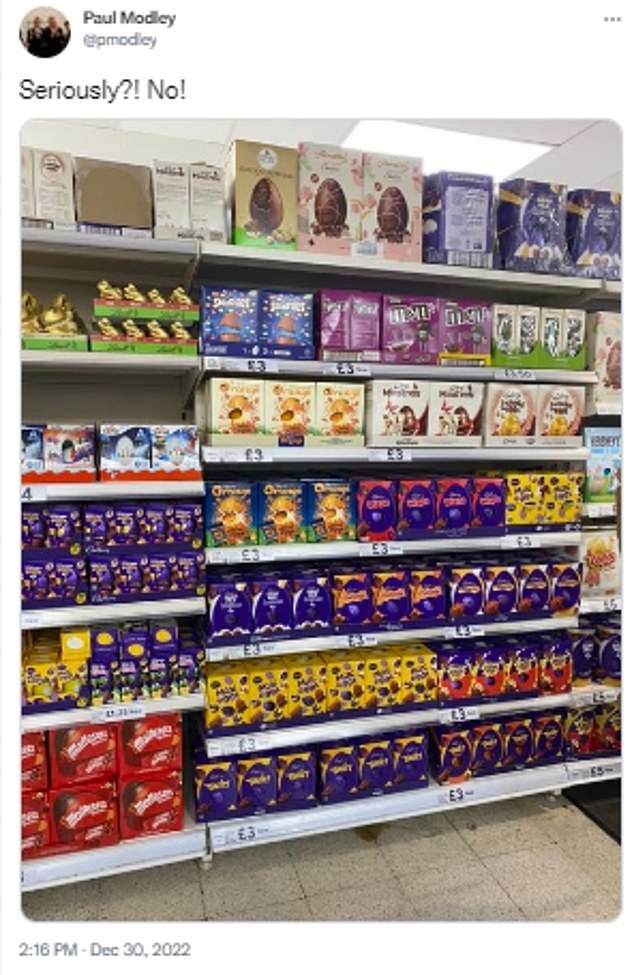 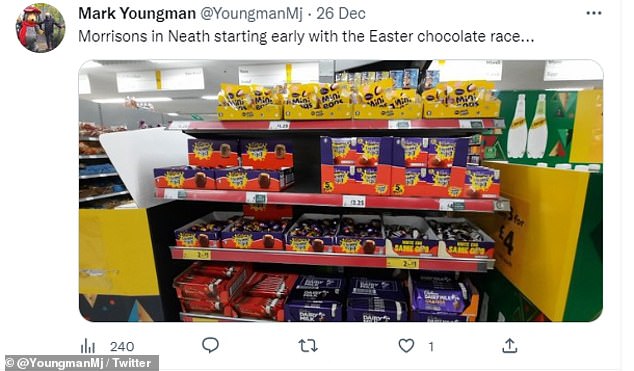 Morrisons was quick off the mark with Easter chocolates after Christmas Day, stocking shelves with eggs in this Wales store by Boxing Day

One shopper in the Tesco Ealing Broadway questioned why the eggs were already on the shelves.

The chocolates were also listed as in-stock by the Clubcard App at the location, with options ranging from Terrys Chocolate Orange Mini Eggs to a £12 Reese’s Giant Milk Chocolate Egg.

Customers at other stores were also angry about the retailers looking to cash-in on the next big holiday, asking why some Easter eggs cost up to £12. 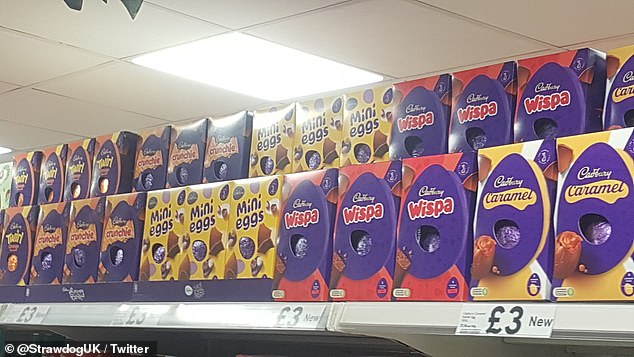 Twitter users shared images of stocked shelves in the days after Christmas Day. Popular Easter chocolates have been seen for sale in a number of major supermarkets 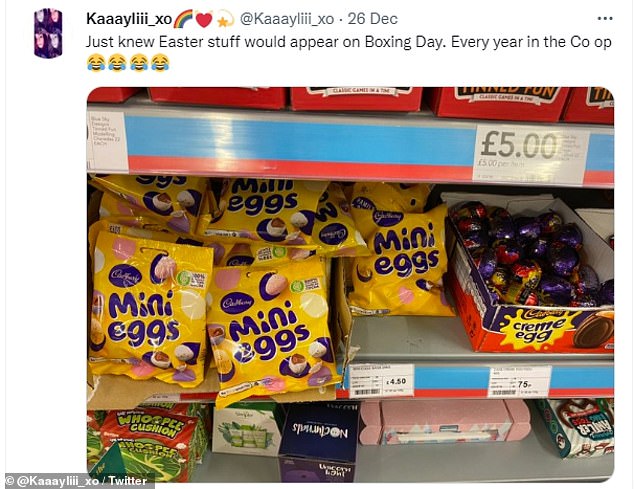 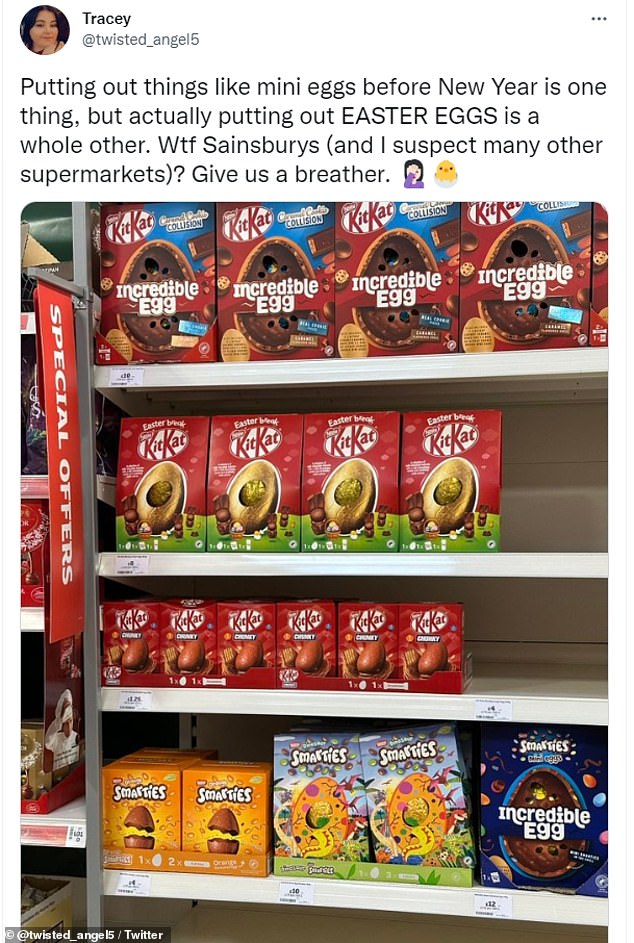 One social media user said the supermarkets should give people a break between holidays.

‘Putting out things like mini eggs before New Year is one thing, but actually putting out EASTER EGGS is a whole other.

‘Wtf Sainsbury’s (and I suspect many other supermarkets)? Give us a breather.’

Another joked: ‘Easter is just around the corner… apparently.’

Others asked where the Valentine’s Day chocolate was, as the romantic holiday comes on February 14, before Easter. 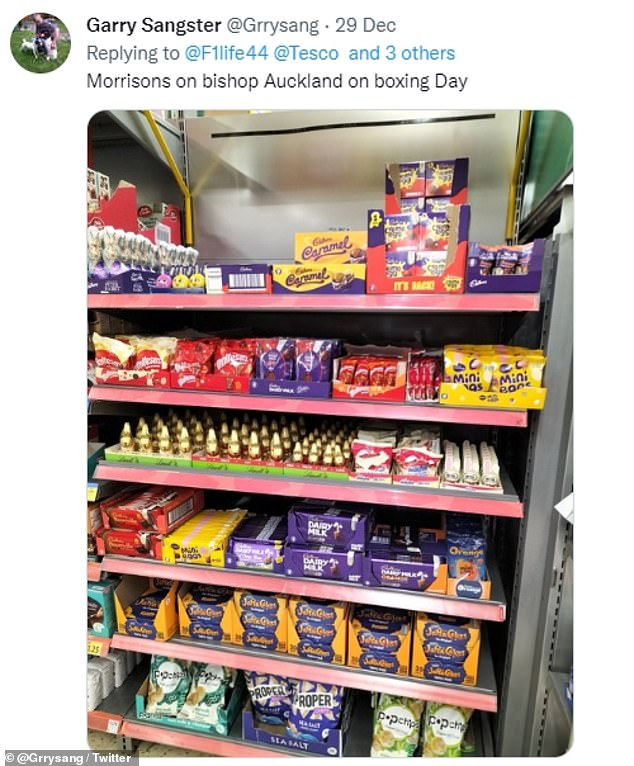 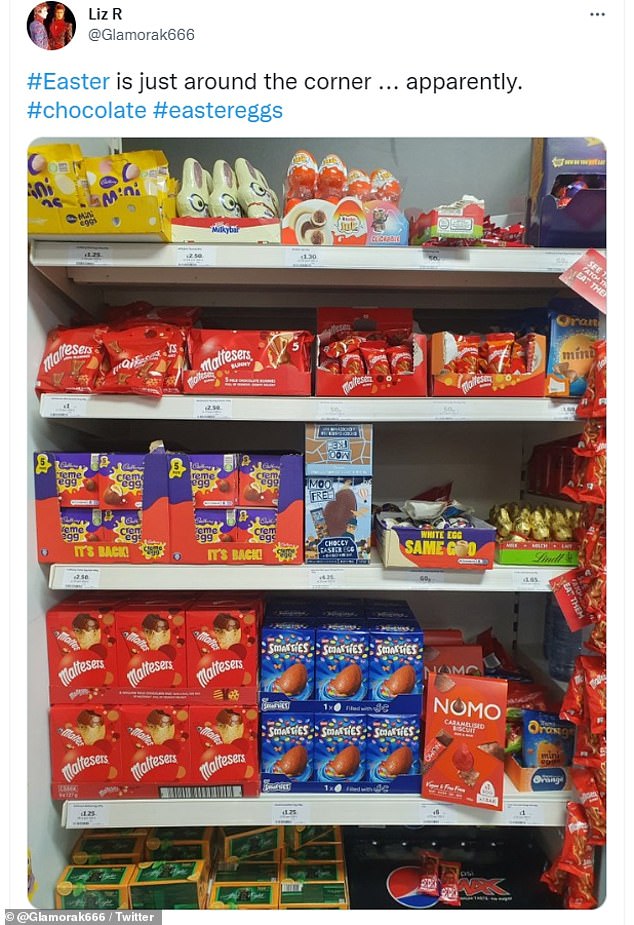 Easter bunnies and eggs have been on display in many shops since Boxing Day. One user joked: ‘Easter is just around the corner… apparently’

Some supermarkets were filling warehouses with spring treats before closing for Christmas, social media users said.

One person joked: ‘I joked with some shelf stackers about Easter eggs in Morrisons the other day and they laughed and said that the first five boxes were already in the warehouse. True story.’

A Co-op spokesman said that Christmas chocolates would be replaced by Easter products as they sold out.

‘As Christmas products sell out and shelves become empty, some Easter products will appear in-store. Sales figures also show that many customers will buy chocolate eggs as soon as they can, and we believe it’s right to offer our shoppers choice’. 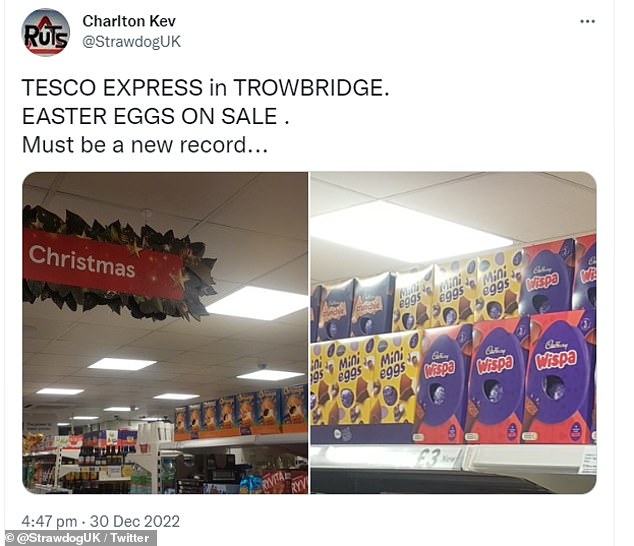 A Tesco spokesperson said while it would be a few weeks before the full range of eggs became available, the retailer understood that some customers liked to be ahead of the game 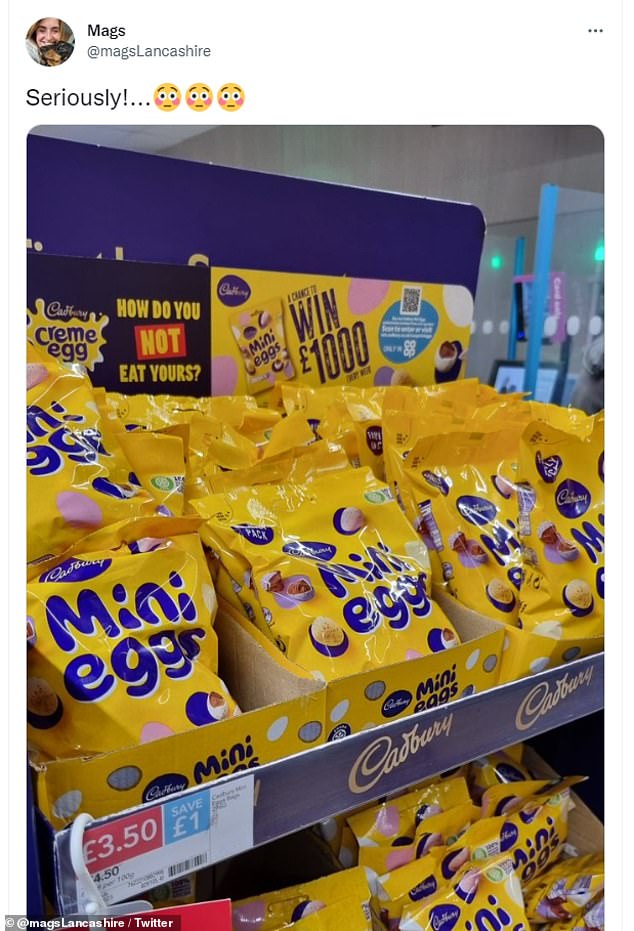 Mini Eggs – a fan favourite – appeared in stores on Boxing Day. Consumers will start to buy chocolate eggs as soon as they are available, retailers said, despite some online criticism

A Tesco spokesperson said: ‘It’s a few weeks until customers are able to choose from our full range of Easter products.

‘However, we know some of our customers like to buy their eggs early so we have started selling a small selection in some of our stores.’

Sainsbury’s said they stocked the long-life items for customers who like to buy gifts in plenty of time.