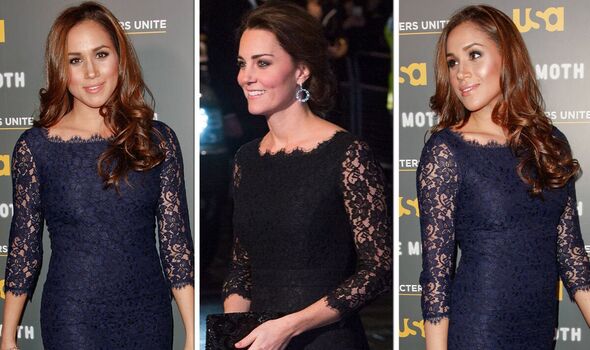 Kate, Princess of Wales and Meghan, Duchess of Sussex are considered royal fashion icons, so it’s hardly surprising their outfits are often compared. While Kate and Meghan have their own distinct style, the royal women have worn some similar outfits in the past.

On one occasion in 2014, Kate even wore the same dress Meghan had worn two years prior, although the women had yet to meet then.

While working as an actress, Meghan Markle wore a navy lace dress by Diane von Furstenberg for a glitzy Hollywood event in 2012.

With mid-length patterned sleeves and a lace neckline, Meghan opted for a glam look to compliment the dress.

The future Duchess wore her long hair down and curled and she opted for dark eye shadow.

For jewellery, Meghan picked a statement charm bracelet and a fashionable chunky ring on her right index finger.

Meghan’s engagement ring from her ex-husband Trevor Engelson, whom she had married the year prior, is also visible on her left hand in pictures from the event.

Meghan spoke to Glamour a few years ago about the DVF dress she wore in 2012 and she said buying the gown was a “big deal”.

She said: “I was going to this event and there was this DVF lace dress with a zipper up the back, and it was so fitted, and had tea-length sleeves.

“Even buying a DVF dress was a big deal, and I bought one in navy and black.

“It was too tight, and too short, and my hair was too polished, and everything about it was trying too hard.”

While very similar to Meghan’s dress, Kate’s had two key differences – a longer flowing skirt and it was black instead of navy.

Meghan’s look was glamorous and chic, perfect for her Hollywood lifestyle at the time.

But as a working royal, Kate opted for a more formal look for her DVF dress moment, taming her usually bouncy tresses into an intricate chignon.

Kate showed off a pair of blue topaz hoop earrings by one of her favourite jewellery brands, Kiki McDonough.

Both women wore a pair of fancy designer pumps, however, with Meghan’s nude heels thought to be a pair of Christian Louboutin’s judging by their red soles.

According to the royal fashion site What Kate Wore, the Princess of Wales donned a pair of black Jimmy Choo heels for her outing in the DVF dress.

Kate and Meghan wearing the same dress has not gone unnoticed online, and Diane von Furstenberg herself highlighted how both royal women have worn one of her creations in a recent Instagram post.

“Wishing them all Peace and Love for the new year!”