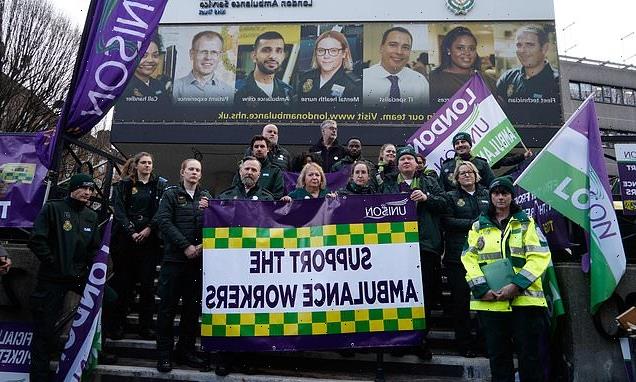 Loyalty cards for ‘strikers’: Scheme is designed to swell numbers by offering prizes to activists who attend multiple picket lines

The union-backed ‘Strike Map’ organisation is offering ‘prizes’ to Left-wing activists who attend multiple picket lines, regardless of whether they have any personal involvement in a series of bitter pay disputes.

It has also established a ‘wall of fame’ for activists who take part in the most disputes. ‘The more pickets you visit, the more free prizes you win,’ the group’s website boasts.

It comes ahead of weeks more of planned strikes, with border guards walking out at seven ports and airports for another four days from today, along with driving examiners in some parts of England. 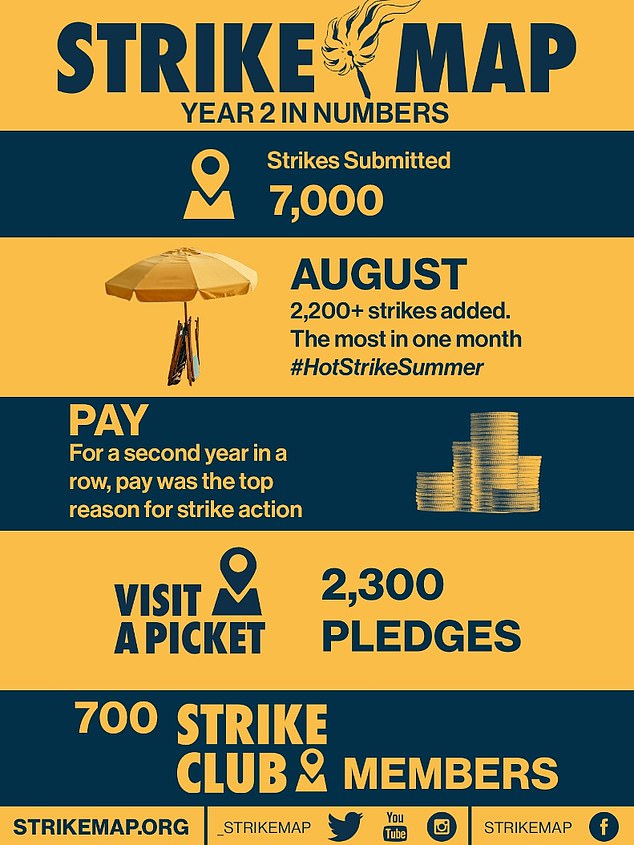 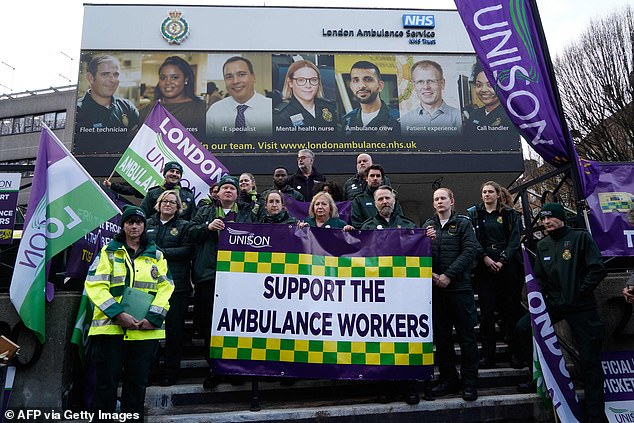 Rail workers will strike again across five days next week, and nurses will walk out for 48 hours over January 18 and 19, and ambulance staff on January 11 and 23.

Workers from other sectors, such as teachers and firefighters, are also being balloted.

Swelling picket lines with non-strikers also fuelled concerns about a possible revival of the banned practice of using flying pickets – when groups of striking workers move from one workplace to another to picket them.

Tory MP Craig Mackinlay said: ‘If activists want to join picket lines unrelated to their own industries, this is evidence emerging of potential flying pickets in all but name. 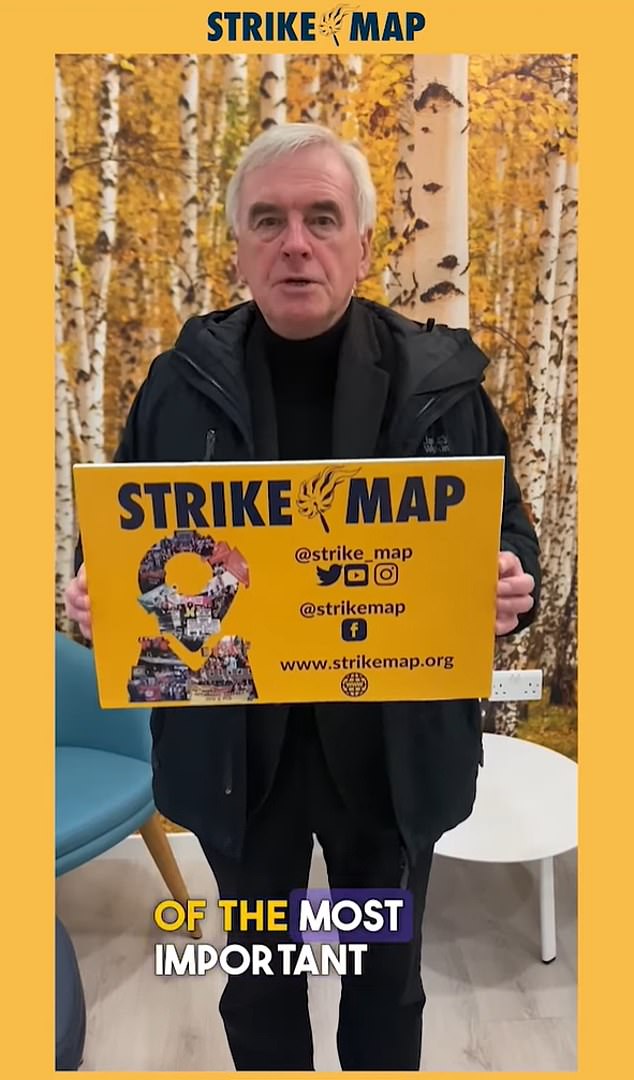 In a video clip posted on the group’s Facebook page, former shadow chancellor John McDonnell said: ‘This is one of the most important assets that we have in the movement now’ 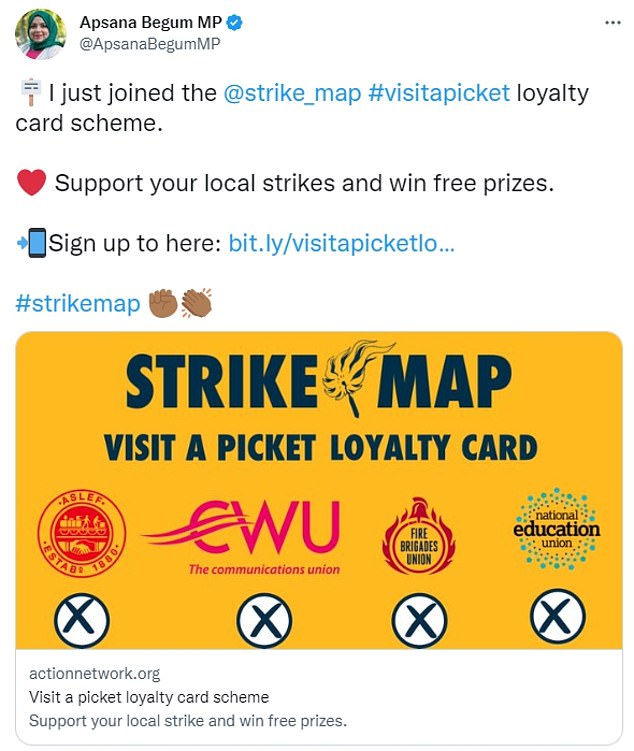 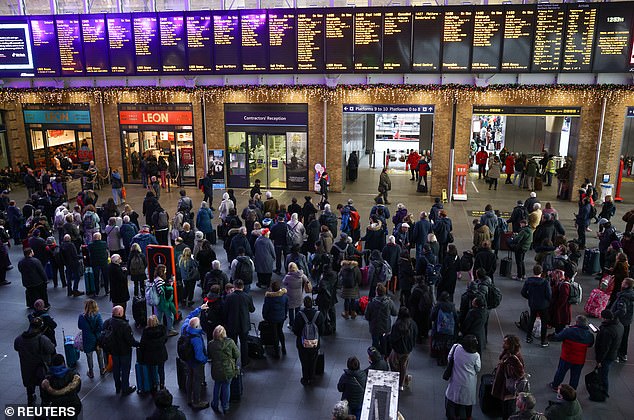 ‘There’s no doubt at all that this is wholly political in its ambitions to cause a de facto general strike to bring down the nation’s finances and the Government.’

He said the development of a coffee shop-style loyalty card was ‘a further sign that for some unions these are political strikes’.

Strike Map also publishes a detailed real-time map showing the time and location of thousands of picket lines across the country – covering disputes by rail workers, postmen, paramedics, nurses and others – so people can travel to join them.

Flying pickets are groups of striking workers that move from one workplace to another to picket them.

But current laws restrict workers to joining a picket only where they are employed.

Only trade union officials who represent workers can be on picket lines at different workplaces if they’re responsible for organising people in those locations.

Margaret Thatcher began the process of banning flying pickets after Arthur Scargill, who led the miners’ strikes in the 1980s, deployed them as a tactic.

It involved sending striking miners to specific plants, usually to prevent the transportation of coal, to give walkouts more impact.

Sympathy strikes or ‘secondary action’, which see unions strike over disputes they are not directly linked to, were first restricted by Mrs Thatcher in 1980 and banned completely in 1990.

Left-wing Labour MPs have backed the Strike Map initiative, which is set to go live next month.

In a video clip posted on the group’s Facebook page, former shadow chancellor John McDonnell said: ‘This is one of the most important assets that we have in the movement now. If you want to express your solidarity and join a picket line, you go to Strike Map.’

In another video message, Kevin Courtney, joint general secretary of the NEU teachers’ union, encourages others to sign up.

Pre-empting the result of his union’s strike ballot, he adds: ‘I am really looking forward to you publicising all our pickets at 23,400 schools when we strike in the New Year.’

According to Strike Map’s website, it is backed by branches of the rail union Aslef and Unite. Its tells activists to complete a form so they can receive their picket loyalty card ‘digitally and physically’.

Applicants should then take a selfie of themselves on picket lines before posting them on social media with the hashtag #visitapicket.

To ‘win prizes’, activists should upload their photo on to their digital loyalty card as proof. Three photos earn activists a place on the organisation’s ‘wall of fame’ and ten result in a free T-shirt.

Former Tory leader Sir Iain Duncan Smith said: ‘With the nature of how these strikes are being planned, there’s no question that they have a purpose. It’s a very clear political purpose to create as much mayhem as possible and… bring a government to the brink of collapse.

‘They’re trying to bring about the chaos of a general strike without actually having to do one.’