Traffic backed up for kilometres on the West Gate Freeway is causing major delays for motorists driving from the eastern suburbs through the city and to Melbourne Airport.

By 11am road works on the West Gate Bridge slowed traffic to a crawl back as far back as the Domain Tunnel, causing delays of close to an hour, according to the Department of Transport and online traffic maps. 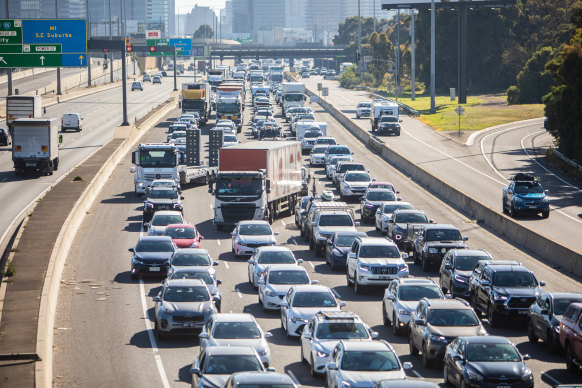 Traffic backed up in Port Melbourne on Tuesday morning as four of the five outbound lanes on the West Gate Bridge were closed for works. Credit:Scott McNaughton

A Department of Transport spokeswoman said, bumper-to-bumper traffic was slowing anyone driving city-bound on the Monash Freeway from getting onto the West Gate Bridge, Bolte Bridge or Tullamarine Freeway en route to the airport.

“It’s looking gridlocked out of the Domain Tunnel and then right though, so it’s a very slow run,” she said. “It’s not worth your while at the moment.”

Delays are expected to blow out even further to 1.5 hours during the roadwork, which started on Monday night and will continue around the clock until January 4.

Four of the bridge’s five outbound lanes will be shut for annual maintenance, including the replacement of waterproof membranes and resurfacing.

VicRoads urged motorists to avoid the Monash Freeway and drive through the northern suburbs to access the Tullamarine Freeway via Mount Alexander Road, Brunswick Road or Bell Street if heading to the airport.

Drivers heading to the Surf Coast or western Victoria should also divert north to Alexandra Parade, Racecourse Road and Geelong Road to get to the Princes Freeway, or take Ballarat Road to the Western Freeway.

The Department of Transport also encouraged Melburnians to use public transport to get into the city during the work to avoid the heavy road delays.

Around Melbourne, traffic was getting heavy close to the MCG as crowds flocked to the Boxing Day Test, while the Mornington Peninsula Freeway was packed with beachgoers and moving slowly, the department spokeswoman said.