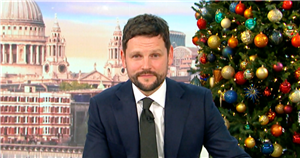 Good Morning Britain has announced a shake up to its presenting roster as the show is set to welcome a new host.

Journalist and broadcaster Gordon Smart, 42, will be joining the GMB team to present alongside current host Charlotte Hawkins this Thursday and Friday.

Posting a photo of himself on set to Instagram, Gordon wrote: “Looking forward to making my debut hosting @gmb this Thursday and Friday with @charlottehawkins1 @itv

“Told my dad about the new gig and he said ‘better get a spray tan, son.’ Good. See you bright and early at 6am, 29th and 30th December. Good Morning Britain!”

In a statement, he also added: "I'm thrilled to be joining the amazing stable of talent, in front and behind the camera, on Good Morning Britain.

"So many of the issues facing the country right now are close to home and I’m relishing the chance to join the debate.”

New host Gordon was formerly editor of the Scottish Sun and has presented radio shows for talkSPORT and BBC Radio Scotland.

I’m A Celeb star Scarlette Douglas will also be making an appearance to present the latest in showbiz news throughout the week.

It was previously revealed that presenter Scarlette, who's known for appearing on A Place In The Sun, is set to replace TV presenter Richard Arnold as Entertainment Editor on GMB over the festive period.

Speaking to showbiz expert Johnny Seifert earlier this month as part of his popular Secure The Insecure podcast, property expert Scarlette, 35, was asked what on-screen plans she has secured for the future and whether her fellow I'm A Celeb campmates might be willing to give her a helping hand.

Johnny asked: "Have you ever had an audition for Loose Women?"

"Never!" she replied. "But – exclusive – I'm gonna have my own section on Lorraine and I am also covering on GMB over Christmas.

"So, you're not technically allowed to be across any other shows in daytime. So This Morning, Loose Women, Lorraine and GMB.

"You kind of can either do one or the other. Luckily and very nicely. They've allowed me to do both GMB and Lorraine."