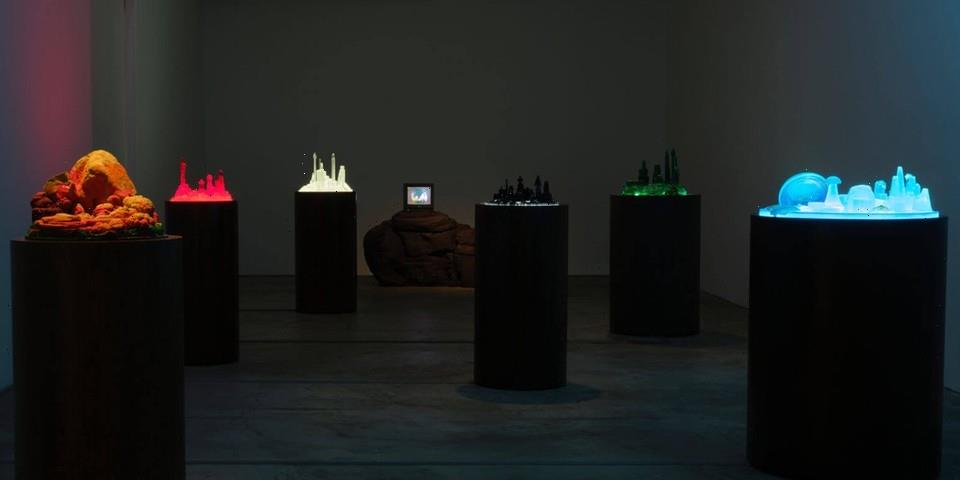 Kelley first began his Kandor series back in 1999, in preparation for an exhibition at the Kunstmuseum Bonn where the theme of the show ruminated on ‘new media of the past’. The Los Angeles-based artist chose to use Kandor, the fictional home city of Superman from planet Krypton, which the hero left as an infant due to the threats of total destruction.

Superman later finds out that the city of Kandor was shrunk by his evil archvillain Braniac and preserved in a glass bottle. After a series of battles, Superman gains possession of Kandor and sustains its citizens through Kryptonic atmosphere. When discussing his work, Kelley once equated Kandor for Superman as “a perpetual reminder of his inability to escape the past, and his alienated relationship to his present world.”

When trying to recreate the comic metropolis, Kelley realized that the depiction of Kandor was inconsistent throughout the comics, in which, “various partial and contradictory city views would have to be randomly patched together to create a composite version,” the artist previously noted. For 12 years, Kelley created mythic and somewhat haunting sculptures, lightboxes and video installations of Kandor — a way in which the artist probed into cultural memory, the impossibility of utopia and the comforting pain of nostalgia.

“My goal was to highlight the differences between the graphic qualities of the comic-book illustrations and the dimensionalized versions of them represented in the sculptures,” the artist said.

Made in collaboration with the Mike Kelley Foundation for the Arts, Subharmonic Tangerine Abyss is on view at Hauser & Wirth Hong Kong until February 25, 2023.