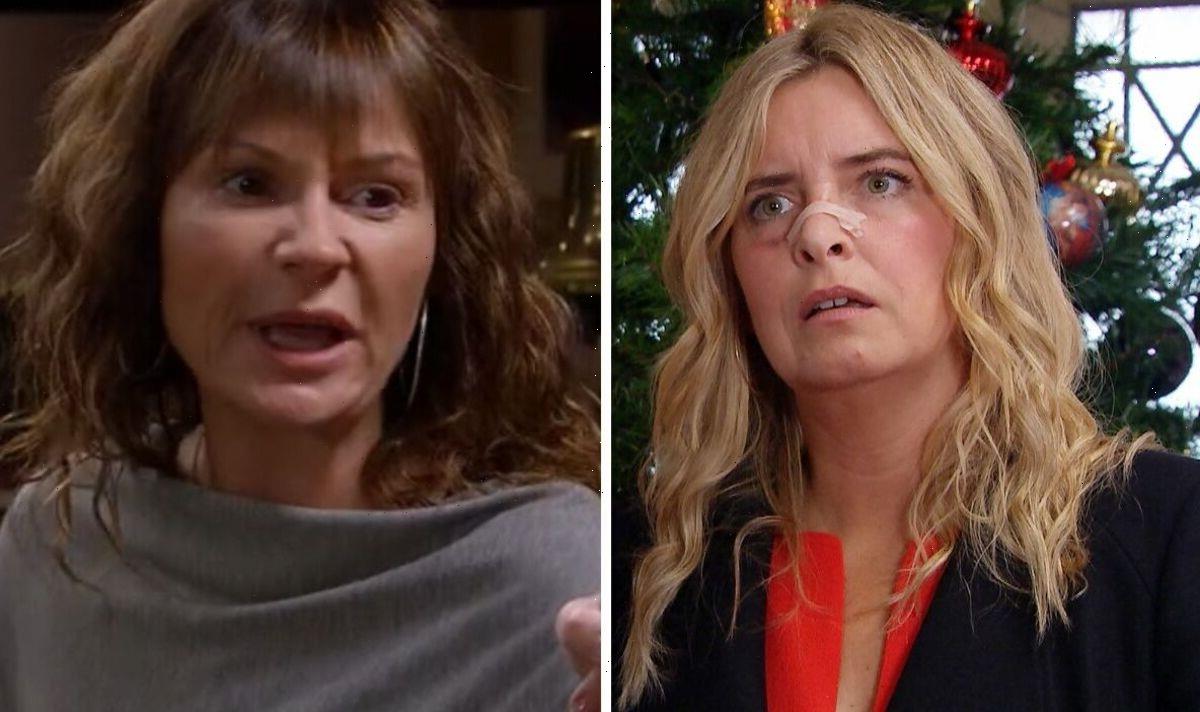 The latest instalment of Emmerdale saw more drama for Chloe Harris (played by Jessie Elland) after her sister Amy Wyatt (Natalie Ann Jamieson) kicked her out of the house. The youngster was also having to deal with keeping her pregnancy a secret from Sarah Sugden (Katie Hill) who is growing suspicious. However, it is only a matter of time before the truth is exposed after Nate (Jurell Carter) worked out that Mackenzie Boyd (Lawrence Robb) was the baby’s father.

After discovering Chloe was being made homeless by Amy, Mack told Nate: “It’s not our problem, is it?”

However, as he walked off, Nate looked on in suspicion and later confronted him about it.

“It’s a shame about Chloe,” Nate said as he probed: “You seem a bit rattled and it got me thinking back, working out dates and that.”

“What are you talking about?” Mack asked as Nate hit back: “It’s your kid, isn’t it?”

“You couldn’t get away quickly enough,” Nate continued before adding: “Maybe I’ll go and ask her.”

After finally coming clean, Nate was quick to point out that Chloe was 20 and would need help financially with the baby.

Chas ended up being kicked out of her home when Paddy (Dominic Brunt) discovered his wife’s betrayal.

On Wednesday night, it all came to a head when Charity (Emma Atkins) told the barmaid she could move in with her.

However, if Chas is pregnant, has she betrayed Paddy further if she finds out Al is the father?

Taking to social media to share their thoughts on Chas being pregnant, Roberto predicted: “Bet next storyline is that Chas will be pregnant and it be Al’s.” (sic)

Mick replied: “Or she’ll claim to be pregnant by Paddy & string him along for 8 months before the baby’s born #Emmerdale.” (sic)

Fan Eve went on to say on the Emmerdale Facebook page: “So is she going to lie to Paddy and tell him it’s his….That would be cruel.”

“We all knew she would fall pregnant who’s going to get the house? Cain is covering for his son Kyle,” Serena Fraser added.

Doreen Morfitt went on to theorise that Chloe and Chas will team up and move in together.

Meanwhile, David Metcalfe (Matthew Wolfenden) was trying to remain positive despite putting his home and shop up for sale.

The shop owner also had high hopes for a job interview, but towards the end of the episode, he found out he didn’t get it.