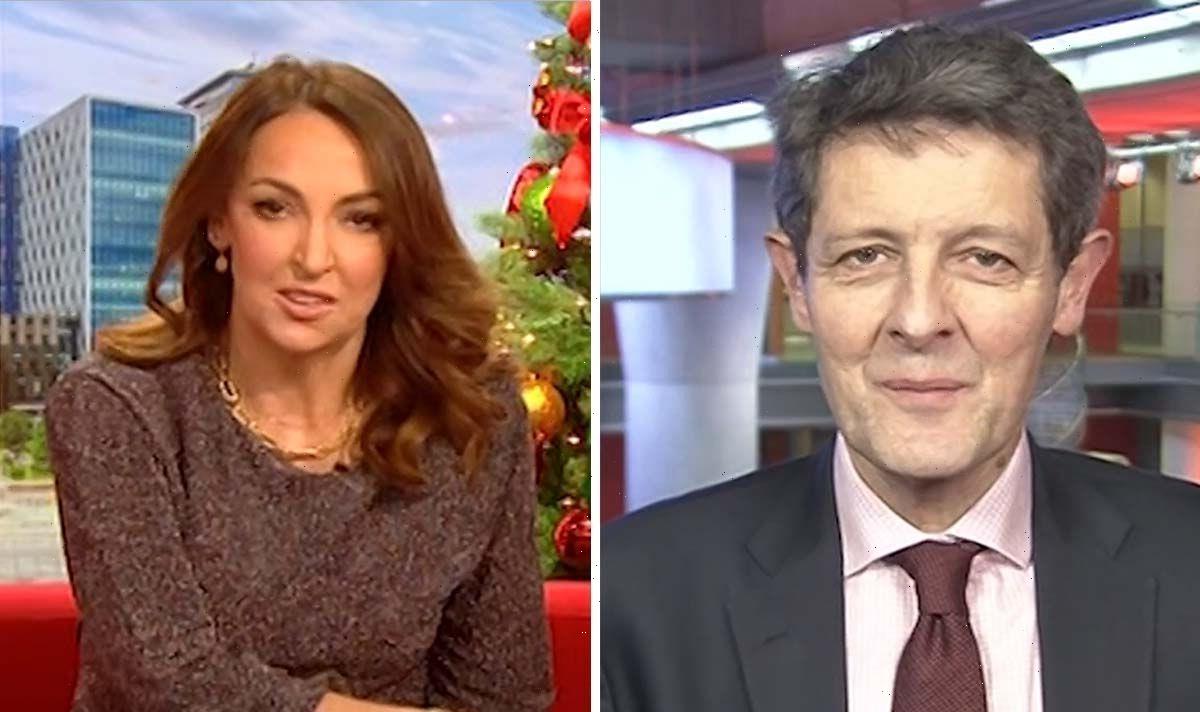 Sally Nugent was worried over the voice of journalist Hugh Pym during a segment on BBC Breakfast on Tuesday. The health editor was updating the presenter and colleague Jon Kay on the ambulance strikes, complete with a rather nasally sounding report. Despite his job title, Hugh sounded as though he may be under the weather with a winter bug.

Battling through a sore throat, Hugh finished his segment on the ongoing union strikes by ambulance staff.

He said: “Unions representing ambulance staff are adamant that they are negotiating locally and responsibly with management over what calls will be responded to.”

A concerned Sally remarked: “Thank you very much indeed. There is also a little tiny bit of a worry here on the sofa about you.

You sound a little bit croaky. I hope you’re okay because I know you’ve got a busy couple of days coming up. That’s Hugh Pym.”

He replied: “I think some lozenges are going to do the trick but thanks.”

Sally added: “Go get some hot water and lemon. Hugh Pym, our health editor, not sounding the healthiest.”

The pair then moved onto the next segment and Hugh perhaps took on their advice and had some much-needed lozenge.

Hugh has been a journalist for two stints and has been a fixture of political and health reporting for over 20 years on the network.

The journalist was formerly a parliamentary candidate for the Liberal Democrats, but missed out on a spot in Westminster when he stood for election in 2001.

The pair will star in The Ocean At The End Of The Lane this month but conversation soon turned to Charlie’s dramatic turn in EastEnders.

Sally asked the soap legend what filming was like for the huge Christmas storyline in Walford.

Charlie tried not to give too much away in the storyline between Janine, Mick Carter (Danny Dyer) and Linda Carter (Kellie Bright).

She said: “I was doing all sorts of crazy filming and I have to be careful what I say because I am not quite sure where we are at.”

Charlie also revealed the shocking return of Ian Beale after nearly two years away from Albert Square, was kept a secret.

The actor explained: “I didn’t even know Adam Woodyatt was going back! Chris Clenshaw is the executive there and it feels like it’s in a good place at the moment.

She remarked on the festive episodes: “It was long 22 page scenes, but when you get an opportunity to get your teeth stuck into a storyline like that and I was working with Danny and Kellie, who I adore.

Sally joked: “I am glad you’re laughing about it because you’re not always laughing on screen, that’s good to know.”

BBC Breakfast airs every day at 6am on BBC One