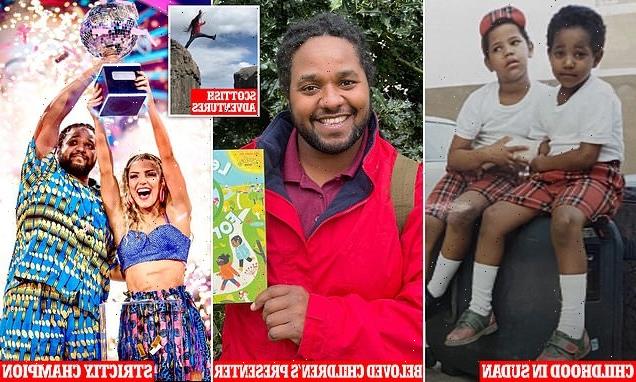 From spotting hippos on the Nile to lifting the glitter ball trophy: How Sudanese Hamza Yassin moved to the UK unable to speak English aged 8 before becoming a wildlife photographer in remote Scotland

He was the little known Sudanese wildlife cameraman who arrived in the UK at the age of eight in the late 90s, unable to speak a word of English – and he’s now the most sought-after man in the country.

Hamza Yassin, 32, and his professional dance partner Jowita Przystal, 32, triumphed the 20th series of Strictly after fighting off stiff competition in the finale on Saturday night.

Yassin – who has worked on Countryfile and Animal Park – was known to younger viewers under the guise of Ranger Hamza, presenting CBeebies live-action show Let’s Go For A Walk and new series Ranger Hamza’s Eco Quest.

But he has now become a household name having been crowned champion of Strictly Come Dancing – and his life story is as spectacular as his win on the show. 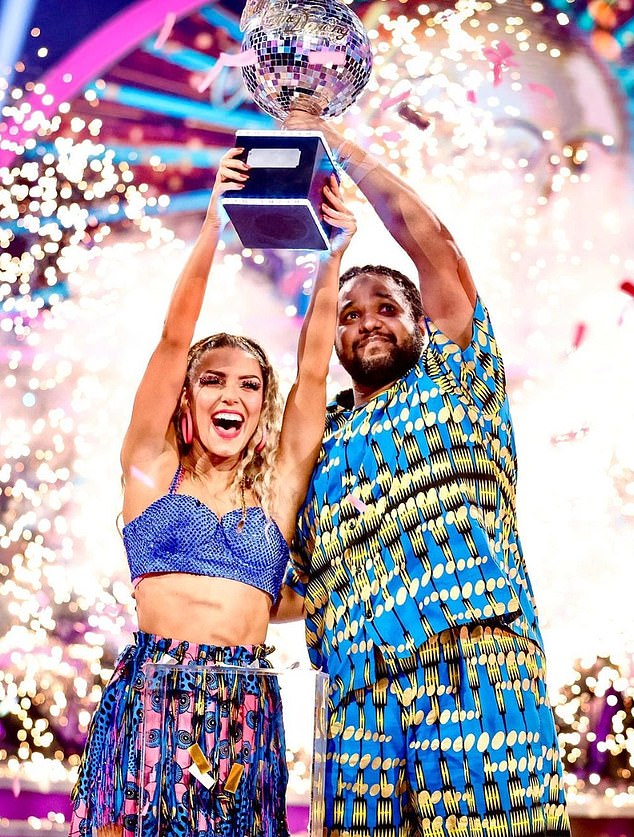 Hamza Yassin, 32, and his professional dance partner Jowita Przystal, 32, triumphed the 20th series of Strictly after fighting off stiff competition in the finale on Saturday night

Hamza was born in Sudan, where he lived with a large number of family members.

His grandmother oversaw the property, which each of her seven children also living there in their own sections of the home.

He told The Guardian he could see the Nile from the top of the property, where he would occasionally spot crocodiles and other wildlife.

He said: ‘You quickly learned how important family is. Aunties weren’t really aunties, they were like second mothers. You don’t cook for one, you cook for a large number of people, which was really beautiful.’ 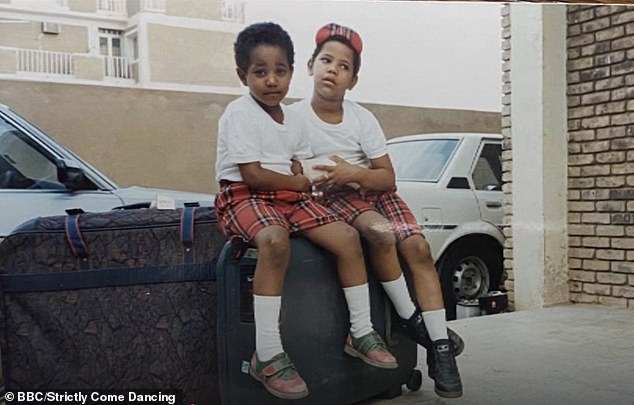 In 1998, at the age of eight, Hamza and his medic parents left Sudan for the UK after the Royal College of Medicine extended an invitation for them to practise there (pictured left, with his brother)

In 1998, at the age of eight, Hamza and his medic parents left Sudan for the UK after the Royal College of Medicine extended an invitation for them to practise there.

His mother Ilham Karrar and father  Ahmed Yassin moved around the country a number of different times as they worked in different hospitals.

They settled in Newcastle where the photographer says he could only say ‘hi’ and ‘thank you,’ though he has admitted that he soon learned to say the Geordie phrase like ‘Wyeeee man.’

Ilham previously told Northampton Gazette: ‘I was frequently moving into new hospitals and that meant relocating the children to new schools six to seven times.

‘This did affect their childhood, but it helped them to become very understanding and adaptable people.’ 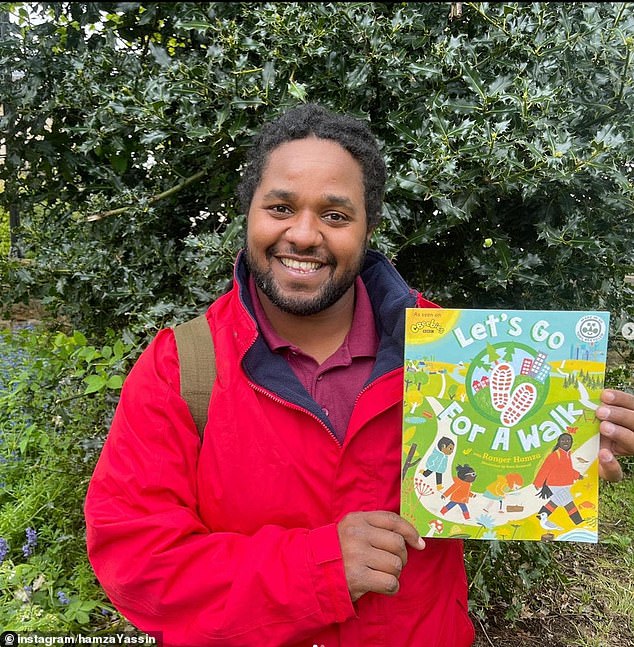 Yassin has previously revealed his dream to be like legendary wildlife broadcaster Attenborough, 96, after his dyslexia stopped him from going into the medical profession

Meanwhile Hamza was still learning and curious about life in the UK, telling The Guardian: ‘I remember there was a kid I was looking at, really perplexed, because he had blue eyes, blond long hair. I’m going: ‘I’ve never seen anything like that.’ We became good friends.’

The family moved to  Northampton in 2001, where Yassin attended the £20,000-per-year Wellingborough school. It was there that he was identified as dyslexic.

Ilham explained: ‘Some schools refused to get him tested for a learning difficulty because they just thought he was struggling because English was not his first language.’

When a teacher recognised his dyslexia, she set up support, which allowed Hamza to turn around both his life and his grades. 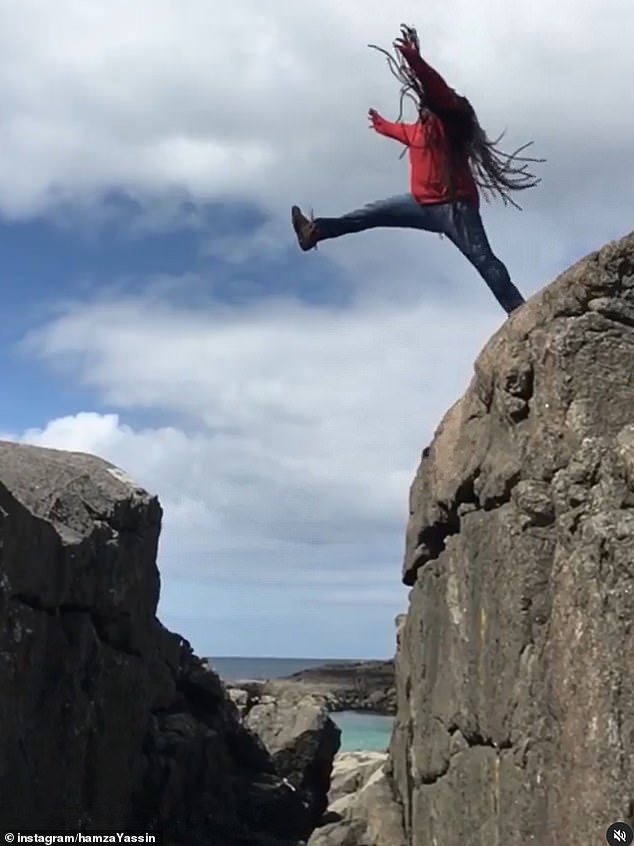 Yassin has previously revealed his dream to be like legendary wildlife broadcaster Attenborough, 96, after his dyslexia stopped him from going into the medical profession.

He said: ‘I was following in the family footsteps being in the medical profession but then declined it for zoology when I had a heart to heart with my parents.

‘I said to them look, I’m severely dyslexic this is going to be an absolute nightmare.

‘As much as I’ve love to please everybody by becoming a medic I’ve got to follow my dreams of becoming a wildlife cameraman and zoologist. 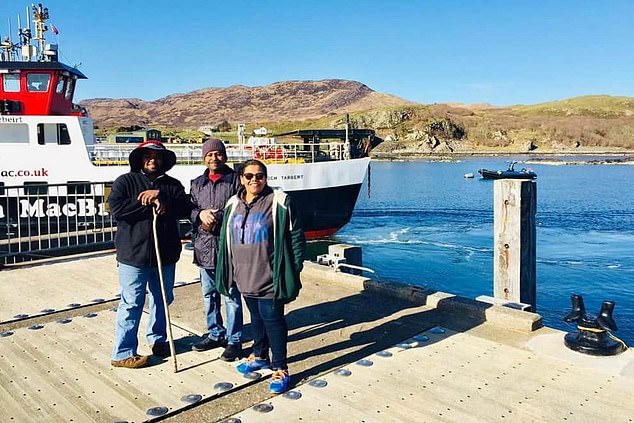 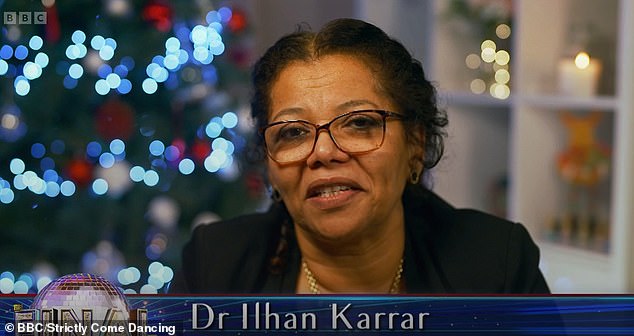 ‘I am someone who has fallen deeply in love with mother nature and want to look after it thanks to the people like Sir David Attenborough and Steve Irwin, God rest his soul.

‘They gave me the love of mother nature and I want to pass that onto the next generation.’

He studied Zoology with Conservation at Bangor University before doing a masters in Biological Photography and Imaging at the University of Nottingham.

He later earned an honorary master of science degree to go with his 2011 degree. 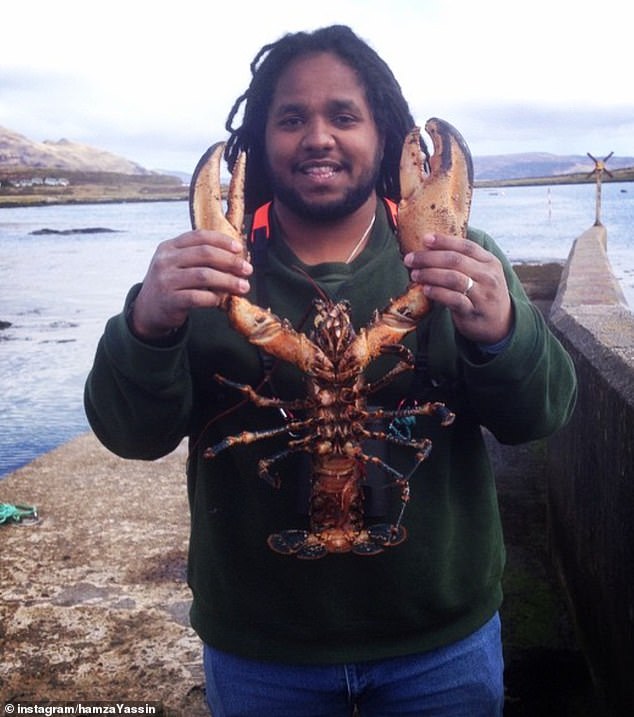 He left home when he was 21 after being inspired by a family holiday to a remote Scottish village on the west coast peninsula of Ardnamurchan.

He decided to stay in the village to observe the wildlife, despite having no job and nowhere to live, with his parents convinced it was just a phase.

Hamza told The Sunday Post: ‘I went on holiday to the west coast and fell in love with it.

‘Two weeks later, I told my parents I had found where I was going to stay, came back and never left.

‘I slept in my car for nine months looking for work and for a place to live.

‘They thought it would be a two-week thing, a phase. My dad said: ‘He will come ‘back to us when his clothes are dirty and he wants more home-cooked food.’

‘But the phase is nearly 11 years old now, it is not a phase any more.’

After a year living in the back of the car, he bought a small house and settled in the area for good.

He began slowly but surely breaking into the wildlife photography space.

He added in an interview with The Herald: ‘I never in a million years imagined I’d work in front of the camera.

‘But to have the opportunity to inspire the younger generation as I was inspired, if I can do that, then I will be a happy man.’ 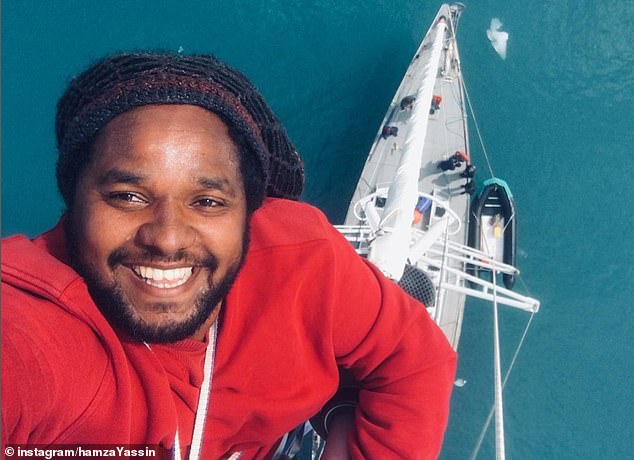 Hamza soon made a name for himself on the island and would have locals approach him to tell him of their wildlife spots.

The Sudanese-born star said in a 2020 interview: ‘I’m the only black person on the whole peninsula and most of the west coast.

‘Even people on neighbouring islands know who I am.’

He has lived there ever since and recently fronted Channel 4 documentary Scotland: My Life in the Wild and Scotland: Escape to the Wilderness, in which he guided celebrity companions on journeys through western and eastern Scotland and the Highlands.

Prior to Strictly, he was perhaps best known for his role as Ranger Hamza in the CBeebies shows Let’s Go for a Walk.

Yassin has appeared on The One Show and as a guest presenter on Countryfile, and in 2021 he joined the BBC series Animal Park about the lives of keepers and animals at Longleat Safari Park.

He previously said he hoped that starring on Strictly will help him with another dream he has – to find a girlfriend. 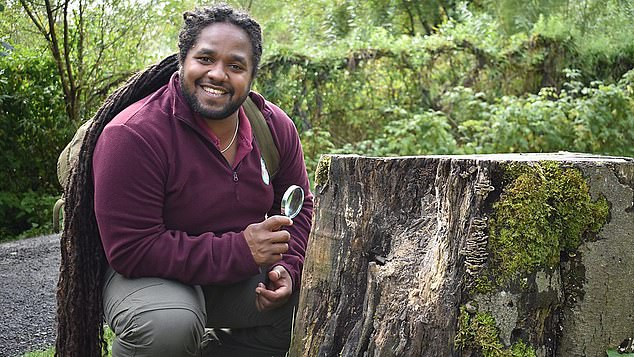 Yassin has appeared on The One Show and as a guest presenter on Countryfile, and in 2021 he joined the BBC series Animal Park about the lives of keepers and animals at Longleat Safari Park

He spends months working in remote areas of the world, alone with no mobile phone reception.

He previously explained: ‘I am single. My work takes me away for eight months at a time, and I’m working in places where it’s not conducive in having a partner, I wish I could find someone to settle down with so it’s great to have Strictly.’

Meanwhile the 32-year-old has also told how he hasn’t cut his hair for 17 years.

Speaking about his hair on This Morning, he said: ‘I remember, my mum used to sit me down, me, my brother and my dad, and just give us the number two the whole time. 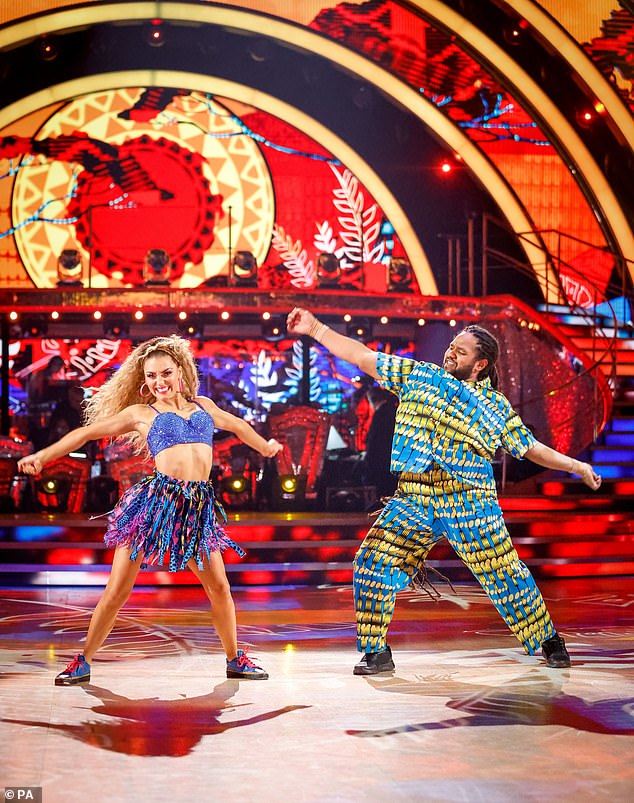 ‘There’s been bits that have [been] trimmed because I was in the Arctic and it dipped in a bit of engine oil so it’ll get snipped off every now and then.’

Hamza was crowned the winner of Strictly Come Dancing 2022 on Saturday night.

The wildlife cameraman, 32, fought off stiff competition from fellow competitors Fleur East, Helen Skelton and Molly Rainford as he was announced as the champion by hosts Tess Daly and Claudia Winkleman.

Hamza and Jowita’s victory comes despite the pair landing at the bottom of the leaderboard, no thanks to their Showdance which was earlier branded ‘underwhelming’ by Craig Revel Horwood.

Speaking after his win, an emotional Hamza said: ‘Words can’t describe how I feel. I want to thank one person in particular – Jowita, you are an angel disguised as a human being. That’s what you are, you’re amazing.

‘Thank you to everyone out there for voting for us. This is the best thing that’s ever happened to me.’

He went on to share the inspiring words a choreographer once said to him, with Hamza stating: ‘One, surround yourself with people whose eyes light up when they see you come in.

‘Two, the top of one mountain is the bottom of another so keep climbing. And three, slowly is the fastest way to get to where you want to be.’

A source close to the star said: ‘Some of the bosses at the BBC knew that when Hamza was revealed in the Strictly line up, few of the show’s loyal viewers would know who he was but they just knew he would end the series the most loved of all of the contestants.

‘Getting him on the show was key to their end game, which is making him into another David Attenborough.

‘Strictly has recently turned into a machine which elevates talent the BBC want to make into stars.

‘And they are absolutely thrilled that this has paid off. There are already works in the pipeline for various programmes.’

‘I didn’t believe I would make it past week one!’: Strictly Come Dancing champion Hamza Yassin thanks partner for being his ‘rock’ as pair celebrate Glitter Ball triumph

Shirley Ballas reveals ‘immense amount of trolling’ on Strictly Come Dancing has led to her cancelling work plans: ‘I’m taking time off for the first time ever’