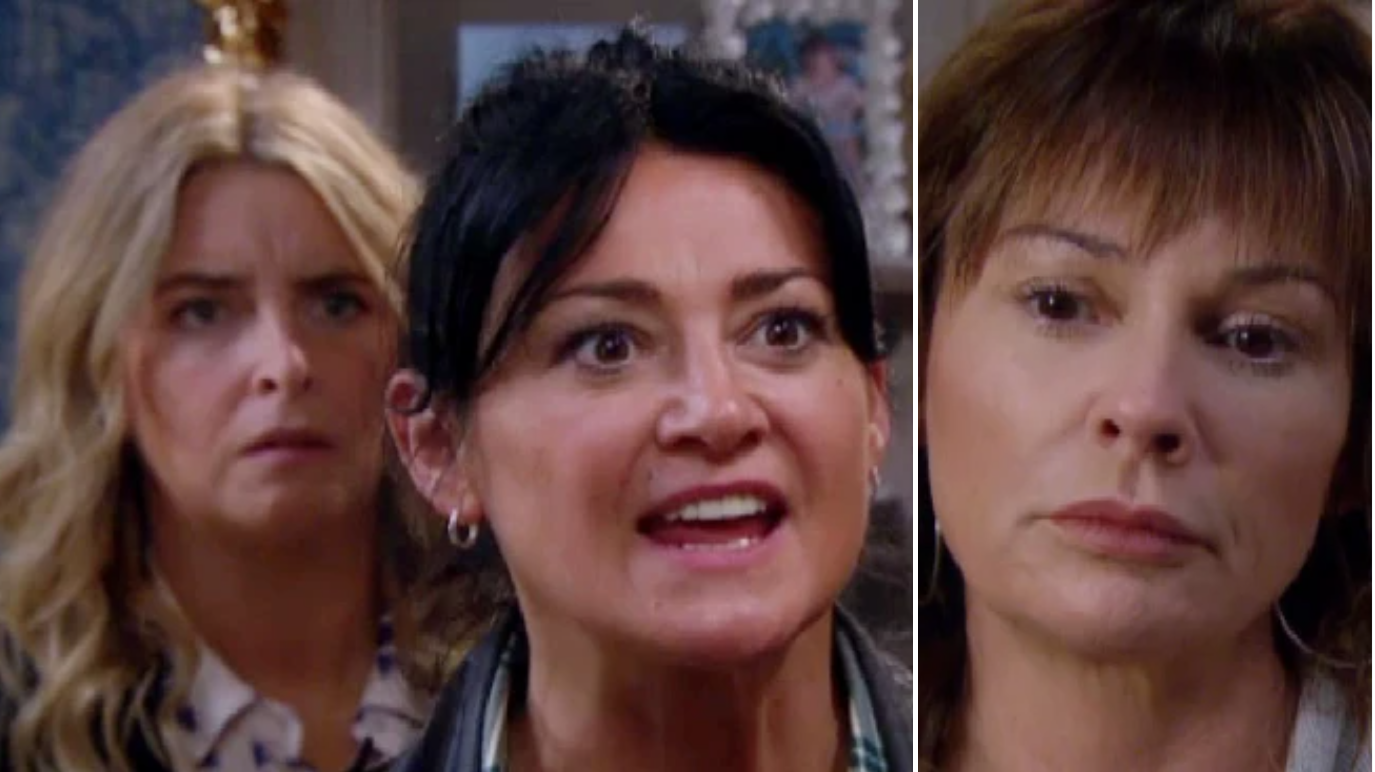 After Belle (Eden Taylor-Draper) told Moira (Natalie J. Robb) the shocking news in last night’s Emmerdale that it had been Chas (Lucy Pargeter) who was having an affair with Al Chapman (Michael Wildman), Moira was ready to have it out with Chas.

She got to the Woolpack to find that Chas wasn’t there. Paddy (Dominic Brunt) had taken her on a surprise trip – which ended n more than a surprise for Chas when she discovered that the house Paddy had taken her to was the one that Al had been planning to buy as a love nest for her and Eve (Bella James).

As Chas’s world fell apart, Paddy explained that Belle had told him all about the affair. Trying to suppress all his hurt and rage, he said that they should arrange to split up in a way that would cause the least upset to Eve, and they headed back to the village with Paddy making Chas promise not to spoil Marlon (Mark Charnock)’s big day, as it was his first day back as chef in the Woolpack.

At the pub Moira’s rage was already simmering as they walked in, enough to make Charity concerned about whether she was ready to kick off about something. Belle was also there, and knowing that Paddy and Moira already knew the truth, she was equally concerned.

Moira announced that Chas had been the one who was sleeping with Al behind Kerry’s back..

‘Sleeping with Al was one thing, but killing him was another,’ Chas shot back at Moira, now at the point where she had nothing left to lose.

As things got more and more heated, Moira looked ready to punch Chas, who said she was going to see Eve. Moira grabbed her, Charity (Emma Atkins) tried to intervene and Moira viciously elbowed her in the face.

As Bear (Joshua Richards) ushered her out, Moira was still seething. ‘My family is falling apart because of you and your lies,’ she yelled at Chas.

While Moira’s rage looked extreme to the onlookers, what they don’t know is that her family is literally falling apart because Cain is in prison for a crime he didn’t commit as he’s willing to sacrifice his freedom so that his son Kyle (Huey Quinn) – who was the one who actually shot Al – doesn’t face punishment.

Meanwhile Charity was left with a very painful nose, and Chas and Paddy were left surveying the wreckage of a marriage shattered by Chas’s lies and deception.

‘I’ve ruined everything that matters, and it was all for nothing,’ Chas admitted to Charity.