For Chicago P.D.‘s Kim Burgess, the trauma of being abducted, shot and then having her daughter abducted is starting to catch up with her.

We saw the physical manifestation of that in Episode 8 with her hand shaking right after assuring Ruzek that forgetting her gun was the result of a bad day. When the show returns on Wednesday, Jan. 4 (NBC, 10/9c), Burgess will still be struggling with the emotional and physical fallout from those harrowing experiences.

“She will continue to deal with it,” showrunner Gwen Sigan tells TVLine. “[It] gets to a point where she can’t really ignore it. She’s been in this space of denial in Episode 8 because it’s frightening. I don’t think she fully knows what’s going on with her body [and] doesn’t really know why it’s happening now.” 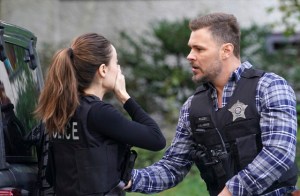 New episodes will see Burgess “push it away as much as she can until she can’t anymore and has to look at it.” That will bring about new revelations, and it “shapes her in a new way this season when she finally confronts it and realizes, ‘This is something I have to have to deal with, [that] I have to figure out and make part of my life.’”

With that self-reflection comes a greater understanding of things like her instinctual reaction to push Ruzek away. “We’ll get into that as far as what is that, and why does she do it?” Sigan says. “It hasn’t always been there.”

As Burgess starts to deal with that trauma, it’s going to bring clarity on how the Chicago cop reacts to things and also “strengthen those bonds she has with her daughter, and with Ruzek.”

“He’s like her partner in life, and when you get out of some of that trauma, it’s about forming new attachments again,” Sigan adds. “So we’ll get to see that she can have some more strength in those relationships and clarity, and how much they’ve been there for her.”