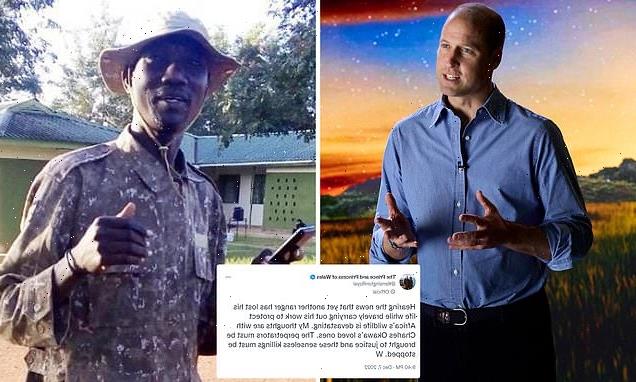 The Prince of Wales has shared his condolences about an African wildlife ranger who was ‘killed by armed poachers’ in a rare personal tweet.

Prince William, 40, took to the Twitter account he shares with the Princess of Wales, also 40, tonight to call for the ‘perpetrators to be brought to justice’.

He explained that his thoughts are with ‘Charles Okawa’s loved ones’, after the Uganda Wildlife Authority (UWA) ranger was shot dead by armed poachers while on duty in Kidepo Valley Conservation Area, according to local media reports.

Signing off with the letter ‘W’, to indicate the personal nature of the post, the father-of-three, who is a keen conservationist, said ‘these senseless killings must be stopped’. 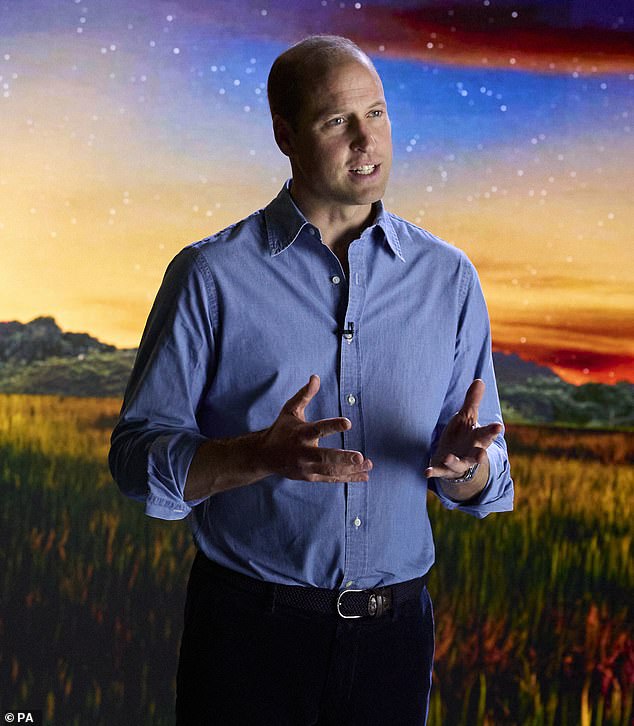 William’s tweet read: ‘Hearing the news that yet another ranger has lost his life while bravely carrying out his work to protect Africa’s wildlife is devastating.

‘My thoughts are with Charles Okawa’s loved ones. The perpetrators must be brought to justice and these senseless killings must be stopped. W’.

Local media said a statement by UWA reported that the incident happened on Monday evening while the ranger and eleven of his colleagues were patrolling the park.

They responded to gun shots, which reportedly resulted in a ‘heavy exchange of gunfire’ between the rangers and the poachers. 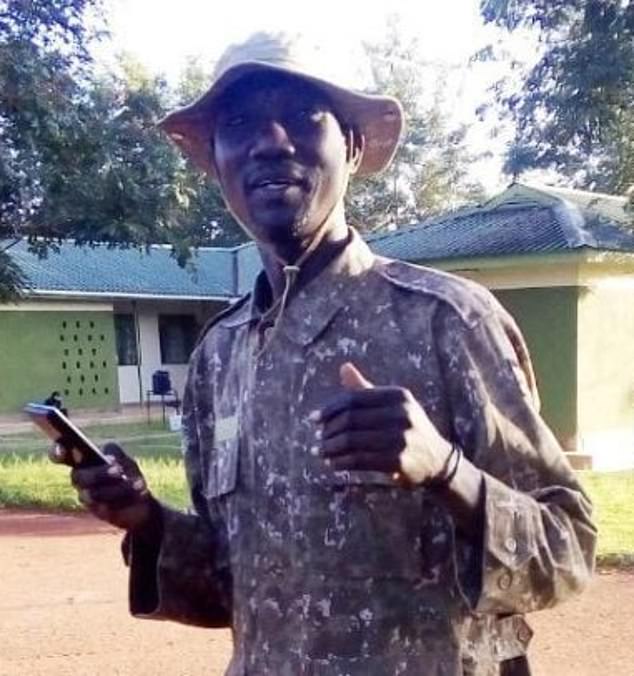 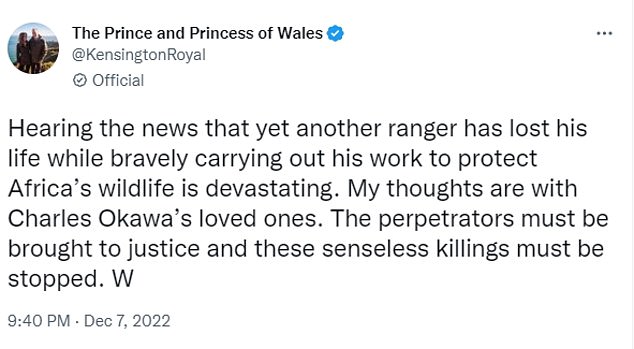 Prince William, 40, took to the Twitter account he shares with the Princess of Wales, also 40, tonight to call for the ‘perpetrators to be brought to justice’

‘Unfortunately, [Okawa] was shot dead by enemy during the exchange. His colleague was injured and is receiving treatment from Yotkom medical hospital in Kitgum town,’ UWA said in a statement.

It was further reported that one poacher was ‘put out of action’ and a gun recovered. Three others were said to have fled the scene.

UWA executive director, Sam Mwandha, told The Nile Post: ‘This is a big loss to UWA. We have registered a tremendous increment in the population of key wildlife species because of dedicated staff like Okawa.

‘Losing him is saddening. He put his life on the line so that our wildlife can be safe,’ Mwandha added.

Earlier today, the Prince of Wales praised the ‘vital work’ of a homelessness charity of which he is patron in helping people off the streets as he encourages people to support them.

Prince William appeared in a video message for The Passage charity, which was posted on Twitter on ICAP’s 30th Charity Day.

Each year, ICAP Charity Day showcases and supports selected charities around the world – and this year, the homelessness charity has been featured in their charities.

Speaking in the video, the Prince of Wales, who made headlines earlier this year for going incognito and working as a seller of The Big Issue for the day, said he had seen ‘first-hand’ how The Passage works to end street homelessness. 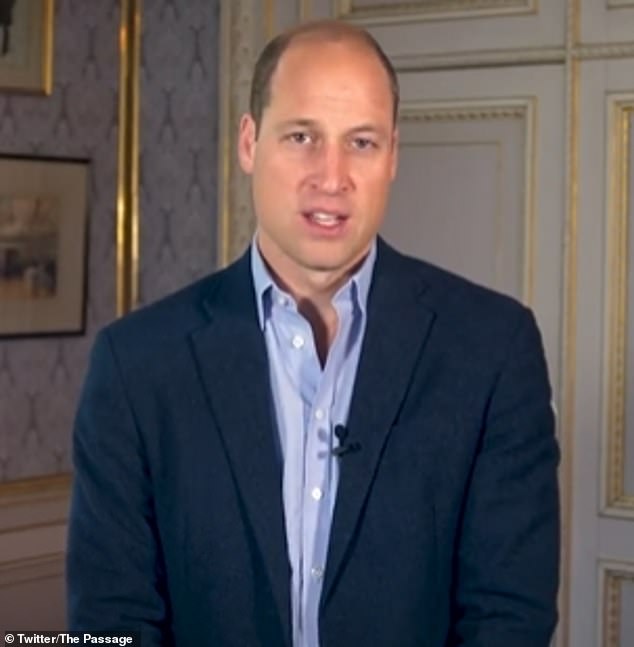 Earlier today, the Prince of Wales appeared in a video posted on Twitter by The Passage homelessness charity in which he praised the work they do to help people off the streets

He said: ‘The Passage’s vision is a society where street homelessness no longer exists and where everyone has a place to call home.

‘They treat those that come to their door with kindness, compassion and dignity.

‘They provide practical and emotional support and they enable people to find a way off the streets and back into society. It’s a mission that has never been more important.’

William went on to express his gratitude to ICAP Charity Day for supporting The Passage, after it has raised more than £155 million for charities around the world since 1993. 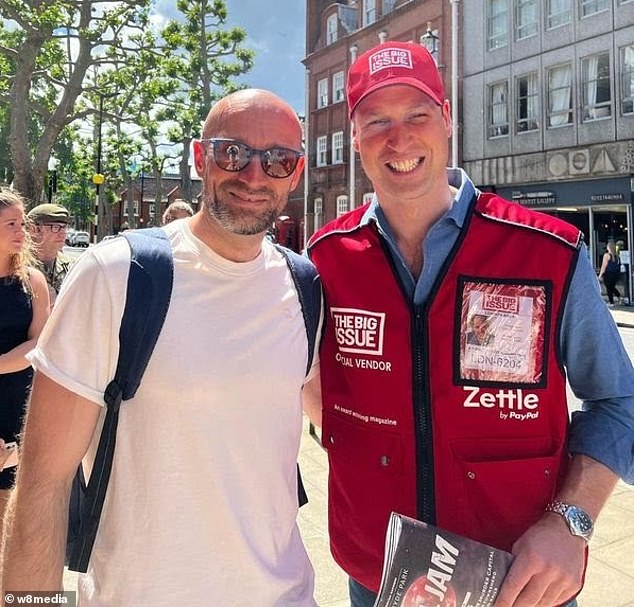 This summer William, 40, went undercover on the streets of London to become a seller of The Big Issue magazine (pictured with a royal fan)

He explained how The Passage helps people avoid homelessness in the first place but also helps those who are homeless find ‘safe and secure accommodation, as well as routes into employment.

Prince William became a patron of The Passage in February 2019, after first visiting the charity in 1993 when he was a child with his mother, Princess Diana.

The Passage’s website states that, following his first visit, the Prince of Wales returned to the charity several times, both on official engagements and in a private capacity to help out.

He said: ‘Over the many years that I have visited The Passage, first with my mother when I was just a small boy, I have developed a great affection for you all.

‘Every time I come here, I am touched by the warmth and friendliness, and the dignity and respect you to show to everyone who comes through your door.’

This summer, Prince William made headlines after royal fans saw through his disguise when he became a seller of The Big Issue magazine for the day, a publication which works to eradicate homelessness.

The father-of-three swapped his usual suit and tie for a red vest and cap as he went undercover as a Big Issue seller on the streets of London.

Passers by who recognised the royal praised his ‘silent gesture’ of charity, which many thought showed his ‘humble’ side.