Kyiv, Ukraine: Russian President Vladimir Putin acknowledged on Wednesday that his “special military operation” in Ukraine is taking longer than expected but hailed the seizure of his neighbour’s territory as a major achievement and said his country’s nuclear weapons are deterring escalation of the conflict.

Putin said the more than 9-month-old war that began with Russia’s invasion February 24 and has displaced millions from their homes, and killed and wounded tens of thousands could be a “long process.” 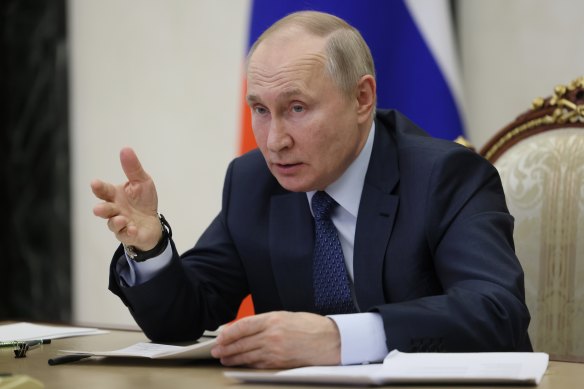 Russian President Vladimir Putin gestures while speaking during the annual meeting of the Presidential Council for Civil Society and Human Rights via videoconference in Moscow, Russia.Credit:AP

Putin also said Russia’s nuclear deterrent was intended only for retaliation against a first strike and appeared to rule out using them on the battlefield.

“We haven’t gone mad, we realise what nuclear weapons are,” he said.

“We have these means in more advanced and modern form than any other nuclear country… but we aren’t about to run around the world brandishing this weapon like a razor.

“As for the duration of the special military operation, well, of course, this can be a long process.” 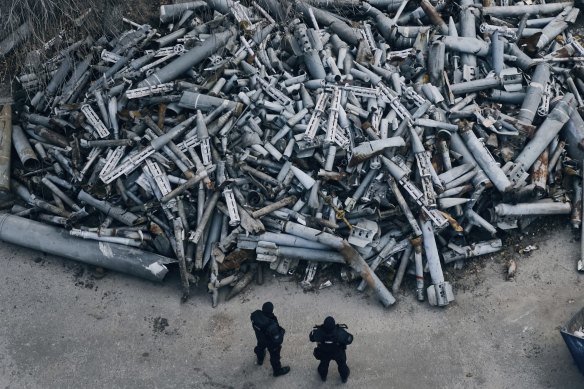 Putin has rarely spoken about the war’s likely duration as Russia has been forced into a series of significant retreats in the face of Ukrainian counter-offensives, waged with increasing stocks of Western weaponry, in the east and south since July.

Despite recent retreats on the battlefield, including the loss of Kherson, the one Ukrainian provincial capital Russia captured, Putin has said he has no regrets about launching a war that is Europe’s most devastating since World War II.

He said Russia had already achieved a “significant result” with the acquisition of “new territories” – a reference to the annexation of four partly occupied regions in September that Kyiv and most members of the United Nations condemned as illegal.

Earlier, Russia’s ally Belarus said it was moving troops and military hardware to counteract what it called a threat of terrorism, amid signs that Moscow may be pressing Minsk to open a new front in Ukraine as the war has bogged down.

He said there was no reason for a second military mobilisation at this point, after the autumn’s mass call-up.

“Under these conditions, talk about any additional mobilisation measures simply makes no sense,” Putin said.

Russians, he said, would “defend ourselves with all the means at our disposal”, asserting that Russia was seen in the West as “a second-class country that has no right to exist at all”. 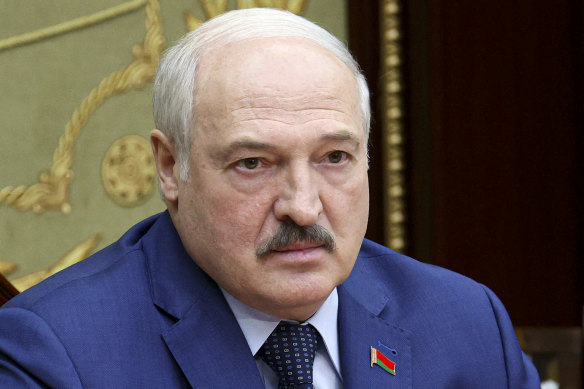 In Belarus, President Alexander Lukashenko, who relied on Russian troops to put down a popular revolt two years ago, has allowed his country to serve as a staging ground for Russia’s invasion of their common neighbour.

He has so far kept his own army from joining in, but recent weeks have seen increasing signs of involvement in Belarus from Moscow. On Saturday, Russian Defence Minister Sergei Shoigu flew unannounced to the capital Minsk. He and Belarusian counterpart Viktor Khrenin signed amendments to the two countries’ security cooperation agreement, without disclosing the new terms.

On Wednesday, the Belarusian Security Council, quoted by state news agency Belta, said troops and hardware would be moving in the country over the next two days, with imitation weapons used for training.

It gave no details about the number of troops or types of hardware that would be moved, or to what locations or of the nature of the training exercises. In Minsk, residents said there were no outward signs of unusual activity there.

Thousands of Russian troops have deployed in Belarus since October, Ukraine says, and Belarus authorities have increasingly spoken of a threat of “terrorism” from partisans operating from across the border. Lukashenko has ordered his military to compile information about reservists by the end of this year.

In the past, some Western diplomats have been sceptical that Belarus would join the war, noting that it had a comparatively small military, and Moscow would be wary of rekindling public opposition to Lukashenko that would weaken him for little gain.

Franak Viacorka, an adviser to Belarusian opposition leader-in-exile Sviatlana Tsikhanouskaya, told Reuters he thought it would be “political suicide” for Lukashenko to send Belarusian troops into Ukraine.

“Soldiers will not obey, elites will split, new protests will start. He (Lukashenko) knows this. Belarusians will not swallow this, and the whole system will crumble,” he said.

Ukrainian officials have also said they doubted Russia had enough troops in Belarus to attack from there yet, and action near the border could be intended instead as a decoy to lure Kyiv’s forces away from key eastern and southern battlefronts.

But some analysts say the flurry of activity in recent weeks could also be a genuine sign Belarus might send troops.

In Ukraine, Kyiv Mayor Vitali Klitschko warned of an “apocalypse” scenario without power, running water or heat in the Ukrainian capital this winter if Russian air strikes on infrastructure continue. He said there was no need for residents to evacuate now, though they should be ready to do so.

Authorities were working to repair the latest damage to the power grid inflicted by a barrage of Russian missile strikes on Monday, hours after apparent Ukrainian drone strikes on two air bases deep inside Russia.

Ukraine has not directly claimed responsibility for the drone strikes but has celebrated the apparent demonstration of newfound capability to penetrate Russia’s defences.

The United States has made clear to Ukraine its concerns about any escalation of the war with Russia and did not encourage it to strike the two air bases, the White House’s national security spokesman said on Wednesday.

But “unlike the Russians, we respect Ukrainian sovereignty”, including decisions about how Kyiv uses weapons supplied by the United States, John Kirby told reporters in Washington.