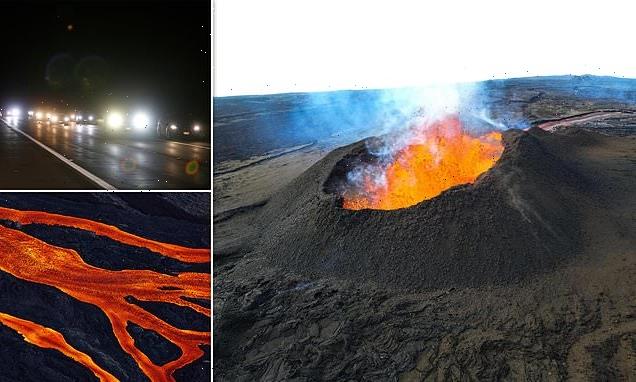 Officials in Hawaii have been forced to activate the National Guard as lava continues to flow from the world’s largest active volcano, threatening critical infrastructure.

Mauna Loa has been spouting for 11 days now, with volcanic rocks being shot into the sky alongside thrusts of molten lava, but officials are adamant that there is no immediate risk to local communities.

Twenty National Guard members were deployed ‘to assist Hawaii County with traffic control and other roles in the Mauna Loa eruption,’ the Pacific island state’s emergency management agency announced in a tweet Monday. 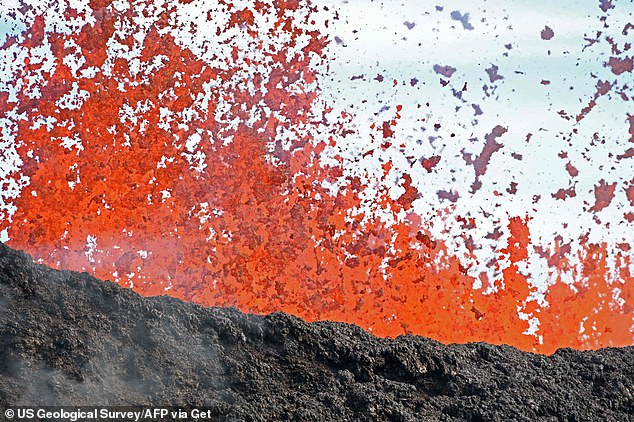 Mauna Loa has been spouting for 11 days now, with volcanic rocks being shot into the sky alongside thrusts of molten lava. The image was taken by the US Geological Survey on December 4 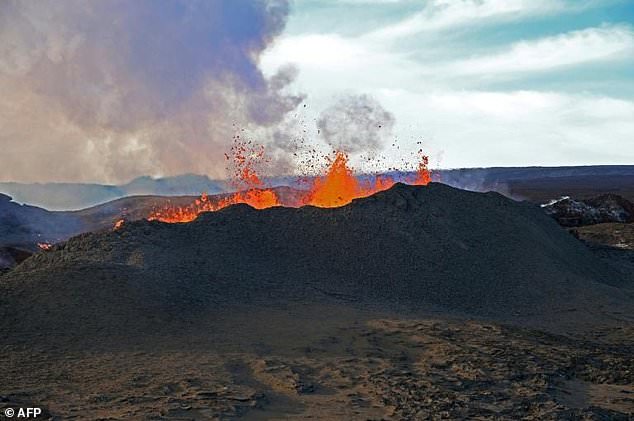 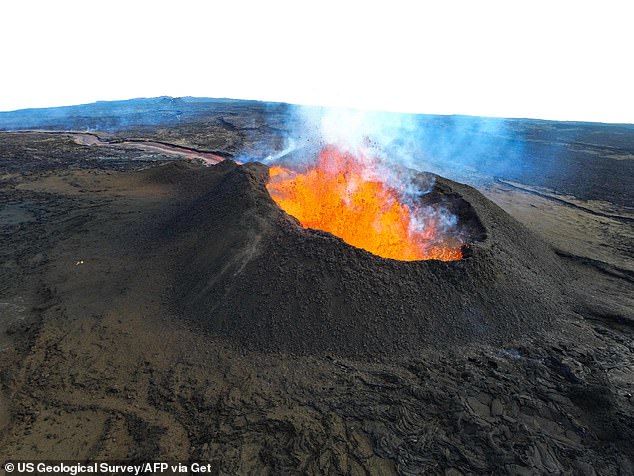 An aerial view shows fissure 3 erupting on the Northeast Rift Zone of Mauna Loa, at an elevation of approximately 11,500 feet (3,510 m) above sea level, at the Mauna Loa Volcano 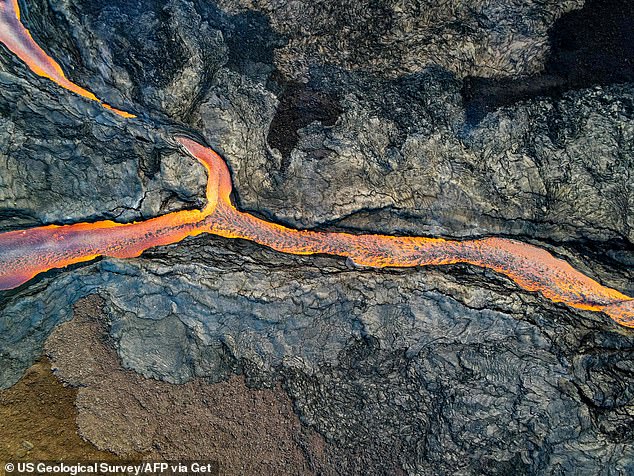 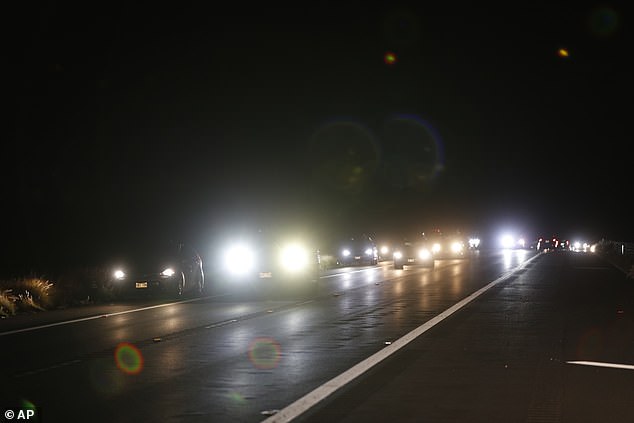 Mauna Loa, on the US archipelago’s largest island, erupted on November 27 and has continued to spew rivers of molten rock on its northern slope.

While the flow has slowed significantly in recent days as it hit flatter ground – now moving at an average rate of about 20ft per hour (6 meters per hour), according to the US Geological Survey – the volcano continues to pump out a steady supply of lava.

The eruption so far has not threatened any homes or local communities but flows are steadily creeping toward the key Saddle Road highway.

The molten rock reaches the highway, the road could become impassable and force drivers to find alternate coastal routes in the north and south.

That could add hours to commute times, doctor’s visits, and lorry deliveries.

Hawaii’s Governor David Ige and the Adjutant General for the state Major General Kenneth Hara made the decision to deploy the National Guard to assist with control around the volcanic eruption. 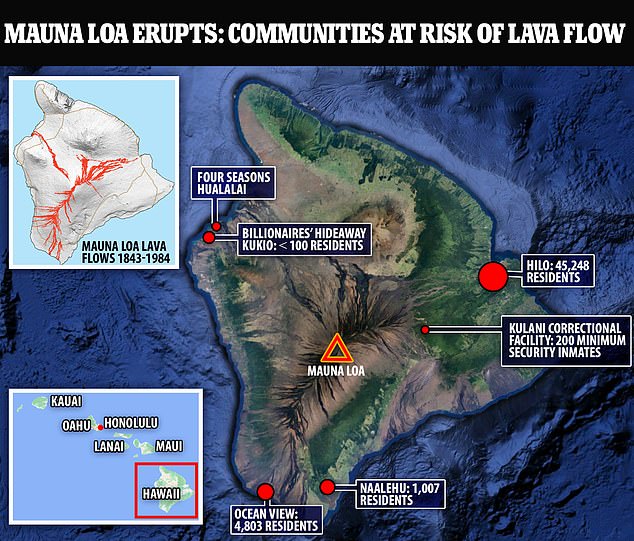 The volcano’s lava rivers have historically flowed into different communities including Hilo, which has 45,248 residents, and billionaire’s hideaway Kukio, home to stars such as Pierce Brosnan and Matthew McConaughey and other affluent figures. In addition to lava flow, officials warned locals to be wary of suffocating fog left in the aftermath of the eruption 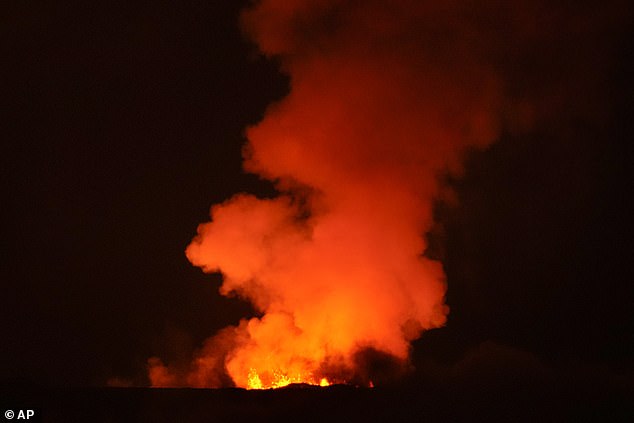 Hawaii’s Mauna Loa volcano is likely going to reach a major highway in the state unimpeded, as it moves within 2.5 miles of traffic 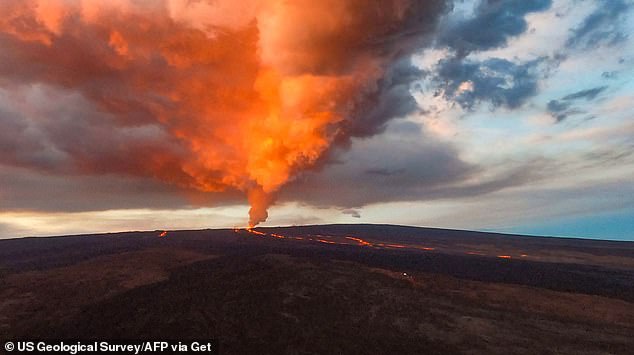 The United States Geological Society (USGS) also provided an update, informing residents that sulfur dioxide emissions are down. However, the emissions are still high enough to have ‘moderate to severe impacts on regional air quality 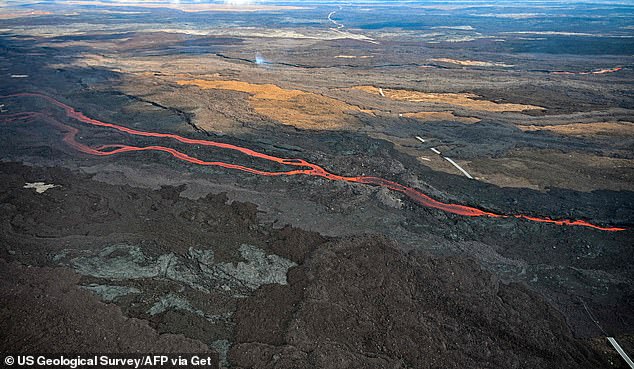 The stream of lava flows from Mauna Loa. The flow is now moving at an average rate of about 20ft per hour (6 meters per hour) 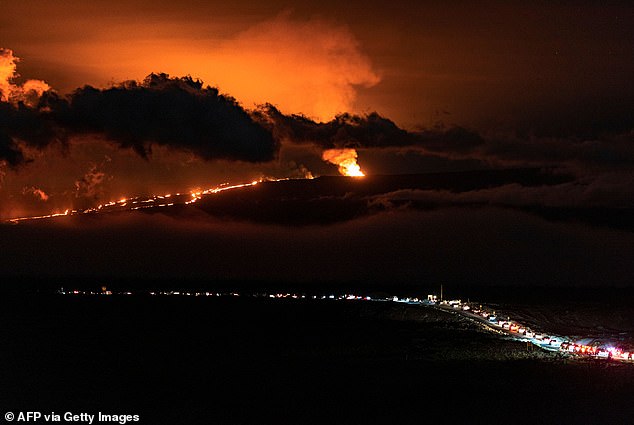 At the latest update on Monday afternoon, Lava was 2.2 miles (3.5 kilometers) from the highway, the closure of which would force residents to make significant detours around the island

Conditions have made it ‘difficult to estimate when or if the flow will impact Daniel K. Inouye Highway,’ the bulletin published Monday added.

The National Guard will be active for some 30 days initially, but this will likely be extended if lava continues to flow and pose a danger to local communities.

The United States Geological Society (USGS) also provided an update, informing residents that sulfur dioxide emissions are down. However, the emissions are still high enough to have ‘moderate to severe impacts on regional air quality, depending on plume rise rate and wind direction.’

The largest volcano on Earth by volume, Mauna Loa, whose name means ‘Long Mountain,’ accounts for half of the entire island of Hawaii, known as the Big Island, and is larger than the rest of the Hawaiian islands combined. 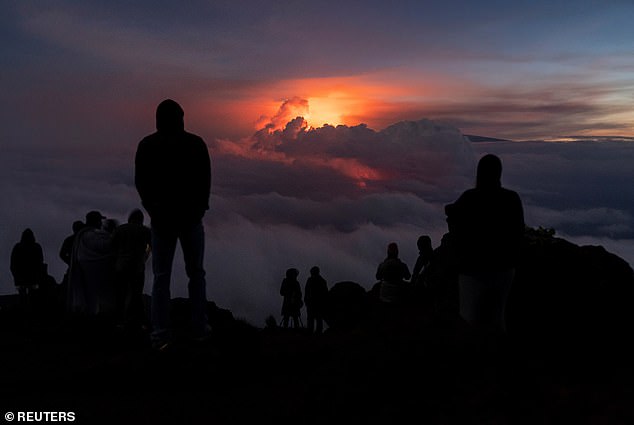 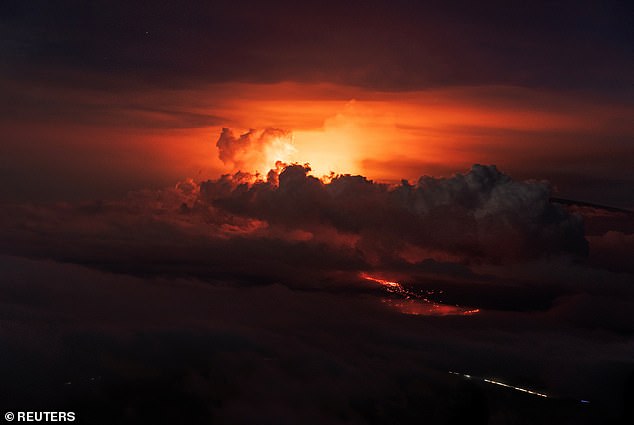 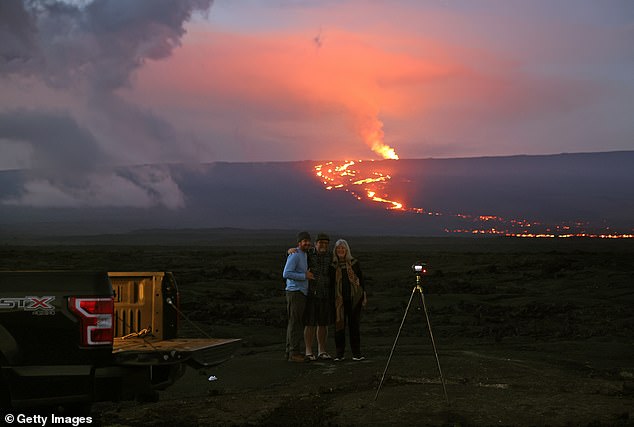 Mauna Loa erupted for the first time in 38 years on November 27, attracting scores of onlookers desperate to catch a glimpse of the event – while scaring off others all too aware of the risks.

Areas in the immediate vicinity of both volcanoes have since been deemed by local officials to be at ‘extreme risk’ of encountering lava flows from the simultaneous eruptions – despite assurance provided by scientists Monday that the lava had deviated to an area where it does not pose a risk to communities.

Still, the uncertainty was unnerving for many who packed up and left their homes on the scenic isle, which is home to a handful of A-list stars such as Pierce Brosnan and Matthew McConaughey.

Mauna Loa’s eruption nearly 40 years ago lasted more than two weeks – but did not flow into any of the island’s communities. Officials said Monday that should be the case this time around as well but warned to be wary of the lava and emissions left by the simultaneous disasters. 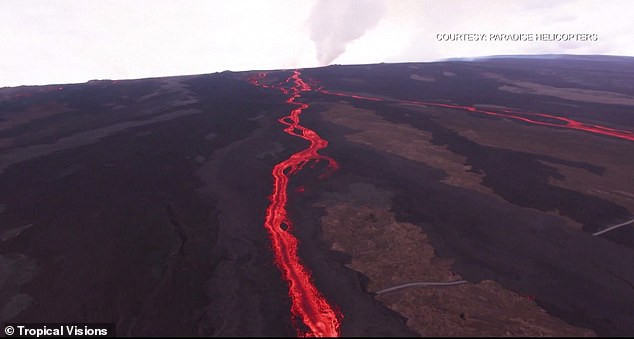 Pictured is an aerial view of lava flows from Loa on Monday December 5. The stream is nearing crucial highways

Mauna Loa, the largest active volcano in the world, erupted for the first time in 38 years on November 27, attracting scores of onlookers desperate to catch a glimpse of the event