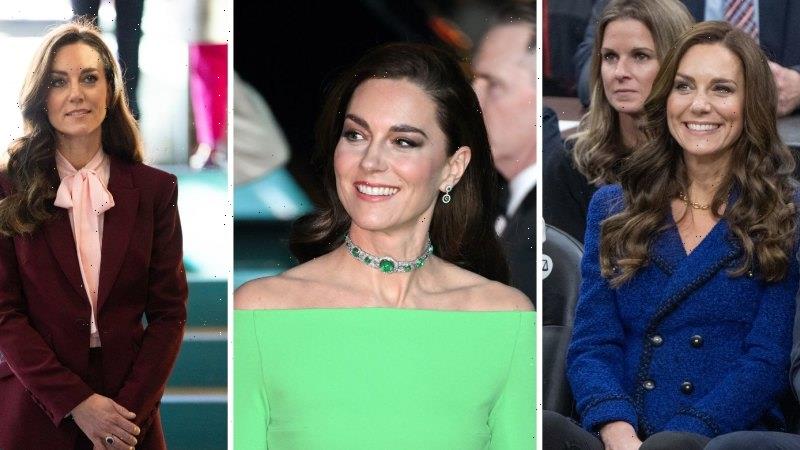 By Damien Woolnough and Melissa Singer

Throughout her 10-plus years in the public eye, Kate Middleton’s sense of style has gone through several seismic shifts. As Duchess of Cambridge, she injected a hefty dose of glamour into an institution that had suffered from charges of dowdiness since the death of Princess Diana. And now, as the newly minted Princess of Wales, Catherine’s wardrobe is again changing, as she inches closer to one day becoming Queen.

Nowhere has this been more evident since the Queen’s passing than on her and Prince William’s trip to Boston last week. In just over two days, the Princess donned seven looks, culminating in a black-tie event to award the Earthshot Prize, one of Prince William’s most cherished causes.

Catherine’s outfits projected an air of business, particularly her selection of two pantsuits, a trend royal commentators predict will continue. And when she wore dresses, several noted that her hemlines had dropped a few inches.

While there were plenty of hits, not every outfit received widespread praise. Here to unpack the tour wardrobe are fashion editor Melissa Singer and style editor Damien Woolnough.

Melissa: The Prince and Princess of Wales have wrapped up their Boston tour, and I’ve been thinking a lot about her style. Particularly that green dress.

Damien: As Maggie Smith’s character says in the Downton Abbey precursor Gosford Park, “Difficult colour, green… very tricky”. Everyone is very excited that the lime dress from Solace was a rental for the Earthshot Prize. That doesn’t make it the right choice and not just because it clashes with the emerald choker once worn by Princess Diana as a headband in Melbourne.

Melissa: The rental aspect, which met the dress code of “rented/recycled/reworn”, is a win for me, and I like that she chose a mid-range label. As they say, very aspirational. And I love Catherine in an off-shoulder silhouette; it’s revealing but still regal. As for the actual dress, wearing green to an environmental awards is a bit … obvious?

Damien: Perhaps I would be more comfortable if Catherine had chosen the “reworn” option and found something in her wardrobe made with hemp or organic cotton, rather than a stretch crepe knit most likely packed with polyester. There’s something on the contoured nose about the rented aspect. Believing that the Princess of Wales rents clothes regularly is as challenging as the idea of her using Afterpay for tiara purchases. 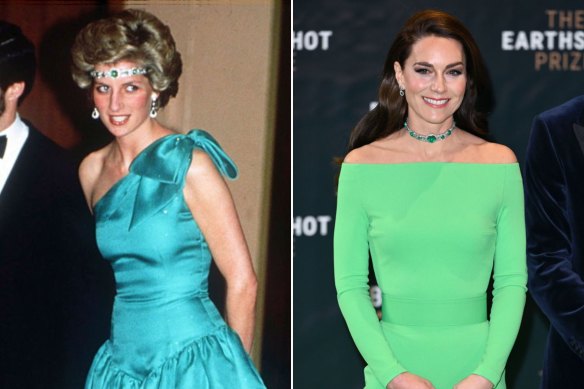 Melissa: But do we need to believe that she rents all the time? If it convinces a bunch of Year 10s to rent their formal dresses, as opposed to buying fast fashion (or fast landfill), then I chalk it up as a win.

Damien: As long as they don’t start wearing Lovisa chokers with their hair down. Chokers work with a Queen Mary updo or Diana’s shorter style, but with Catherine’s hair down I’m getting Pussycat Dolls rather than princess.

Melissa: You really didn’t like the choker selection, did you? Can we talk pantsuits – a few people were surprised to see the Princess disembarking the British Airways plane in trousers. I hadn’t realised it was so controversial.

Damien: A sensible selection to move on with. Once again, I have notes. The Alexander McQueen suit was streamlined and smart. The monotone approach made Catherine look like William’s bodyguard, but I’m sure she’s up to the task.

Melissa: “And I will always love you …” Sorry, couldn’t help myself. Catherine is at her best when she is in McQueen, and gives great coat. Sadly, the weather in Boston was so brutal we may have missed really seeing some of her best looks.

Damien: That Bodyguard reference has me thinking of William courtside at the basketball game in Boston. I know we are going to get to that vintage Chanel jacket Catherine wore, but William’s unbuttoned chambray shirt with a Magnum PI flash of chest hair was game on! Perhaps he’s angling for Henry Cavill to play him in season 21 of The Crown. 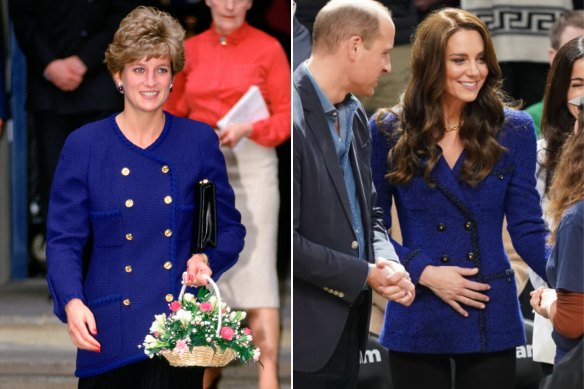 The two princesses of Wales have a penchant for Chanel.Credit:Getty

Melissa: The man really doesn’t get many smart casual opportunities, does he? Now that you’ve brought up the Chanel jacket, 1995 was a good year. I loved the jacket and jeans combination courtside, but I would have loved to see Catherine break out the Supergas instead of yet another pair of Gianvito Rossi heels, which felt a bit … stiff?

Damien: It is a fantastic piece from Karl Lagerfeld’s golden era at Chanel but there was an element of overkill. Chanel at the basketball is like wearing Toni Mativeski to the MCG. Sneakers would have been a good solution.

I need to say there was an outfit I liked. Just beating out the plaid Burberry dress worn to City Hall was the brown Alexander McQueen coat with a flash of burnt orange Gabriella Hearst and boots for an event at Boston Harbor. Classic Catherine. It could have been Balmoral instead of Boston.

Melissa: Except hardly anyone got to see it. Back to your earlier point, perhaps if Catherine wants to make a real statement about sustainable fashion, we may see the orange set again – the orange and brown palette of the jacket and set screams Christmas week.

Damien: That would be perfect. Catherine is at her best on home turf. It was great to see her experimenting with her stitched-up style but basketball courts and US awards shows are not the best fashion laboratories. Leave them to Beyonce, Jennifer Lawrence and Meghan.

That trusty flared Roland Mouret suit with a pussy bow blouse was another example of Catherine’s working royal style winning.

Melissa: And the shade of magenta was on point, beating Pantone to the punch on its colour of the year announcement.