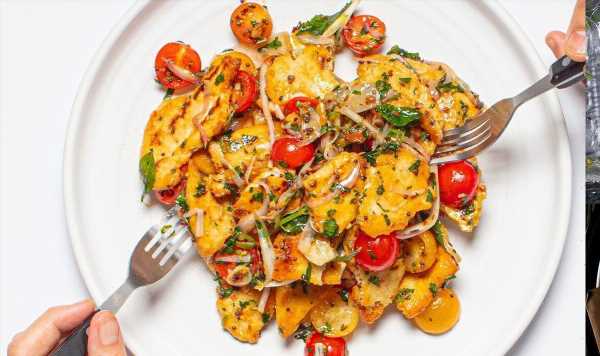 Friday night is takeaway night for many homes across the UK, with curries being a national favourite. If you do find you have some leftovers, before throwing them away, chef and co-founder of the YouTube cooking channel Sorted Food have a great use for any naan bread you might have left.

The dish is a twist on the classic Tuscan Panzanella chopped salad and makes a great lunchtime dish or snack. “Panzanella is a recipe borne from scarcity, made with good bread, good tomatoes and a bit of time to let the ingredients meld and morph into a tasty salad,” he told Express.co.uk. “We use naan and plenty of spices in our cheat’s take – the perfect post-takeaway snack.”

Not only does the recipe reduce how much food goes in the bin, but it will also help your takeaway dinner go even further. The recipe is part of Sorted Food’s newest cookbook titled Can’t Be Arsed with Rules, which shares an array of recipes breaking rules in favour of delicious dishes.

Ben said: “Our new cookbook is all about challenging how we think we should cook and take a deliciously creative approach to making amazing food that doesn’t cost the earth or have to play by the chefs’ rulebook.”

Preheat the oven to 200C. Chuck the torn-up naan onto a baking tray and toss it with the olive oil. Then, bake in the oven for seven or eight minutes, or until golden brown. Remove the bread and allow it to cool.

Next, tip the tomatoes into a large bowl and toss them with the salt. Allow this to sit while you get on with the dressing.

Heat the oil in a medium saucepan over a high heat. Once the oil starts to shimmer and loosen, tip in the seeds, garlic, ginger, chillies and curry leaves along with a large pinch of salt and fry for two minutes until the garlic turns golden. Add the shallots, tamarind paste and sugar, then remove from the heat. Mix well with a wooden spoon.

Add the naan chunks, dressing and coriander to the bowl of tomatoes and mix well. Leave to sit for at least five minutes before sharing out and tucking in.