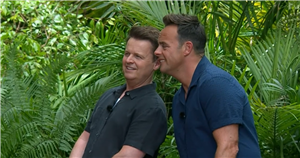 I’m a Celebrity…Get Me Out of Here fans complained campmates Chris Moyles and Owen Waner were stitched up with an “impossible” Bushtucker trial – but show hosts Ant McPartlin and Declan Donnelly disagreed.

Thursday evening’s gruelling trial saw the pair dig through a horrific box filled with a slew of creepy crawlies to find six stars which they then threw into a post box from across the clearing.

The radio DJ was hoping to his improve on his one-star score after he disappointed the star-studded camp with his epic failure last week.

But things didn’t go quite to plan after the Hollyoaks star struggled to get more than one star in the box meaning the hungry celebs were forced to split one meal between the six of them.

Now, fans have taken to Twitter to share their thoughts at the unfair trial, claiming it was impossible to complete in 90 seconds particularly when suspended in mid air from a great distance.

One user penned: “Poor Owen blaming himself, it was a set up to fail … virtually impossible at the end … come on @imacelebrity that was plain torture #ImACeleb.”

A third chimed in with: “Owen should not blame himself. That trial was impossible. #ImACeleb.”

But not everyone was in agreement as the Geordie duo continually advised the actor to throw the stars underarm instead of overarm.

After the trial ended, ITV bosses threw the show back to the boys in the treehouse where Dec insisted: “You should have been throwing it underarm earlier, Owen.”