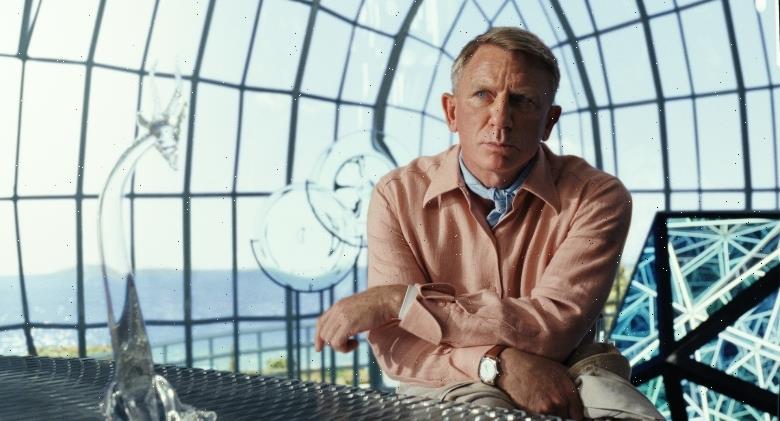 When Oscar-winning production designer Rick Heinrichs (“Sleepy Hollow”) was first tasked with designing the titular structure for Rian Johnson’s “Glass Onion: A Knives Out Mystery,” he treated it like a literal onion, taking the model apart and cutting into it to study the layers. “There was something so cool and architectural about it, that it became part of the design,” he told IndieWire. “You really see the layers of depth in the dome. The metaphor of the Glass Onion works so well and I tried not to invent stuff that wasn’t there.”

For Johnson — whose latest whodunit takes inspiration from such iconic films as “Sleuth,” “The Last of Sheila,” and “Evil Under the Sun” — the metaphor of The Glass Onion was wrapped around the narcissistic, bad-boy mind of tech billionaire Miles Bron (Edward Norton). Bron hosts a murder mystery weekend getaway on his private Greek island with his fellow disruptor friends and — the biggest disruptor of all — Detective Benoit Blanc (Daniel Craig).

For Heinrichs, who previously worked with Johnson on “Star Wars: The Last Jedi”, this was a production designer’s dream: wrapping his head around Bron’s conspicuous consumption and need to be the center of attention. His taste in art is both classical and modern, and he has a special fondness for works of glass, with the Glass Onion dome (which was constructed in London) as his ultimate expression. In fact, the intricate puzzle box invitation sent to all the guests was reverse engineered as a microcosm of the dome. It kicks off with an ornate wooden spinning wheel, and then reveals a series of brain-twisters, including a projection, a Fibonacci number sequence, an abacus, and a combination lock. 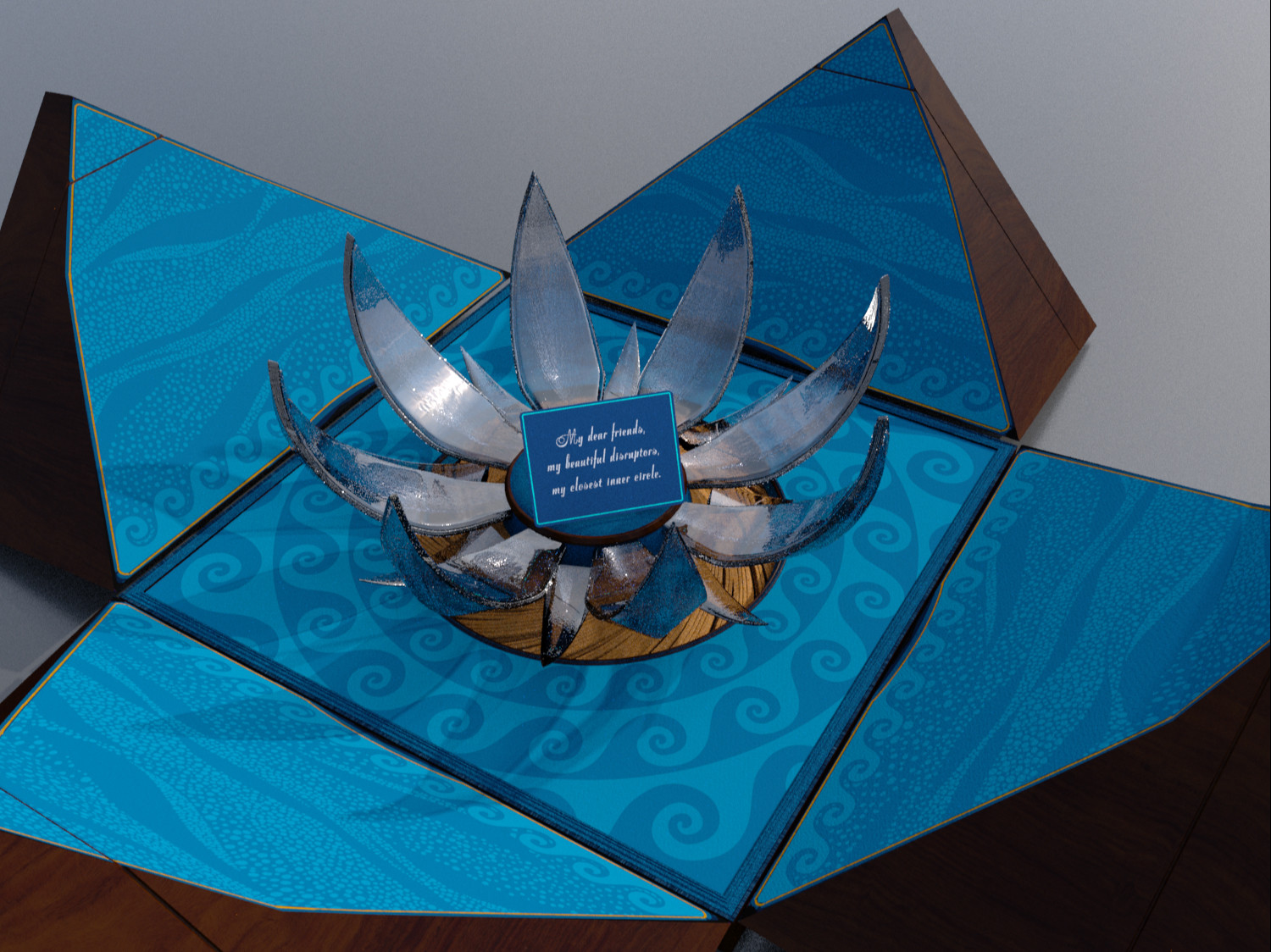 “It opens and reveals itself, ” Heinrichs said, “but it only gives up its mysteries as you figure it out. Like the mystery that’s going on in the film, it’s ever-opening and ever-changing. There’s that point in the middle of the film where everything spins and your understanding is completely reset.”

The main challenge for the production designer was finding the right architectural fit for Bron’s villa. He discovered the Aman Resorts’ Villa 20 in Porto Heli, and decided to use it as a major filming location. It had the right modernist take on Greek classicism, and Heinrichs particularly liked the hierarchy of steps leading up to the resort. The dome was placed on top of the resort through VFX. 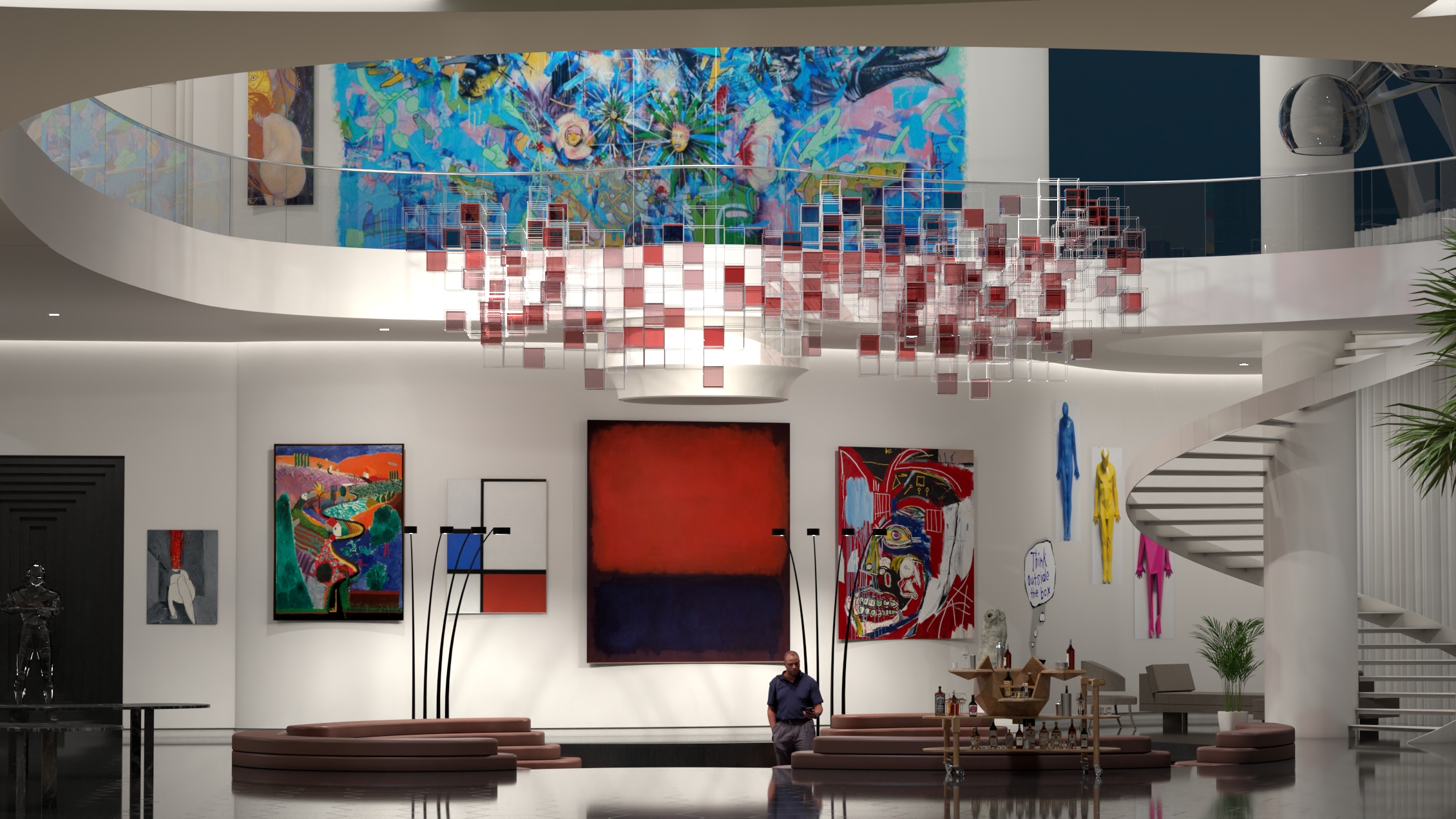 “Glass Onion: A Knives Out Mystery”

In terms of the interior design, the outrageous atrium, with its Greek temple mosaic, houses Bron’s eclectic art collection, including Picasso, Monet, Mondrian, Francis Bacon, Lucian Freud, and — his prized possession — the Mona Lisa, protected in a glass case. Plus, it’s filled with an array of kitschy glass sculptures. “It was the opportunity to reinforce his character with some of my favorite art,” added Heinrichs. “But also they are amazingly beautiful and colorful, and to see them behind the actors added to the ambiance. The fact that Miles has shoved everything in there so tightly is more of his inquisitiveness and desire to seem powerful and overwhelm people.”

The highlight for Heinrichs, however, was having a copy painted of Jean-Michel Basquiat’s legendary “In This Head,” with its solid skull and single eye looking very menacingly to the left of the viewer. It’s the one painting that perfectly sums up Bron. “It sold at auction for $93 million to an unknown buyer, and I grabbed onto it as Miles,” he said.