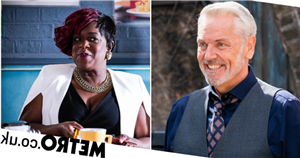 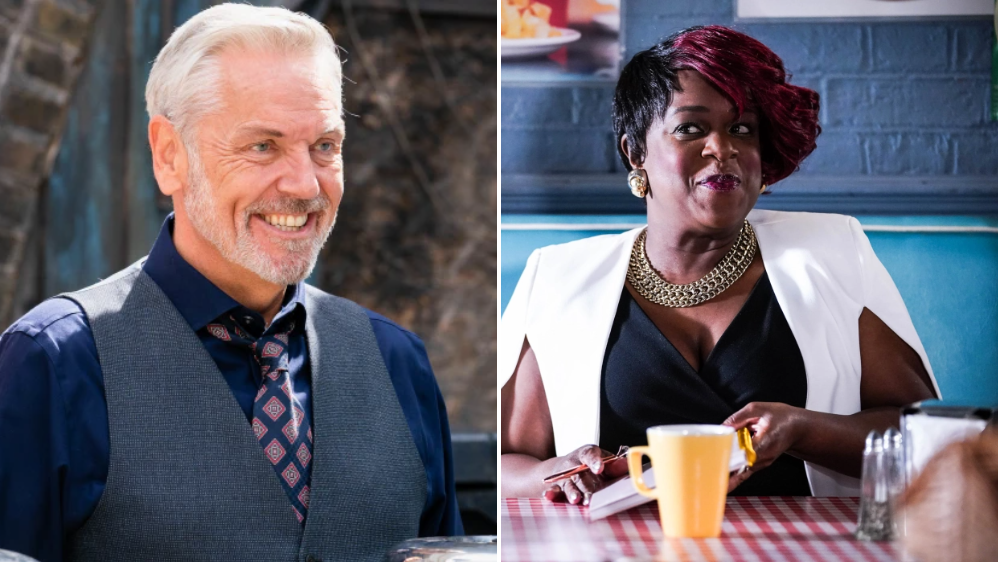 Rocky Cotton may be in a loving relationship with Kathy Beale (Gillian Taylforth) but EastEnders actor Brian Conley had different ideas when he first joined the soap.

As the very cheeky and amiable Rocky made an in your face appearance in Walford, Brian reckons he would have made a good match with the even more outrageous Kim Fox, played by Tameka Empson.

We can see it, the pure chaos it would bring.

‘I love Tameka,’ he grinned. ‘When I first came in, I wanted Rocky to be in a full-on relationship with Kim for the great comedy.

We could have been shooting scenes in bed like Morecambe and Wise, just talking about the world. It would have been really funny.’

There are plenty of laughs off-screen too, with Scott Maslen, better known as Jack Branning, a notable fiend for initiating corpsing.

‘It’s hard to do scenes with him because he’s so hilarious,’ Brian admitted.

‘Scott has this amazing knack of being so stupid before a take, and then as soon as the crew say “Action,” he just cuts out and goes into character.

Gillian (Taylforth) makes me laugh, and that’s where I think our chemistry comes from. And Danny Dyer (Mick) made me laugh.’

While this comes naturally between the actors, Brian insists that playing comedy is much harder than it seems.

‘Being funny is a lot harder than being miserable because there’s a fine line there with being too funny and mugging it up.

‘So, I’m pleased that they often give me the responsibility of doing some funny lines. I like the fact that Rocky can be all bright and bubbly, but then when things go deep, it feels earned.’

It reflects well with the audience too, who have reacted well to the comedian embedding himself in Walford.

And, despite being a household name for decades before his Albert Square debut, Brian reveals that the level of recognition is much more intense now.

‘It is a different level,’ he explained. ‘The other day, somebody recognised me from the back of my head!

‘I was in the petrol station queuing up, and I knew for a fact that this person hadn’t seen my face. They were like, “Oi Rocky!”

‘The other day, me and my wife were going into a clothes shop in London, and this Italian couple were looking at me, and my wife heard them speaking in Italian and then saying, “TV star”.

‘She reckons they’d recognised me, which is mad. When people see me, they always want to talk about Kathy and Sonia, and I had a lot of questions about whether Dotty was my real daughter. It’s something I’ve never experienced in my professional life!’

If Rocky and Kim had hooked up, we reckon there’d have been even more interesting responses!