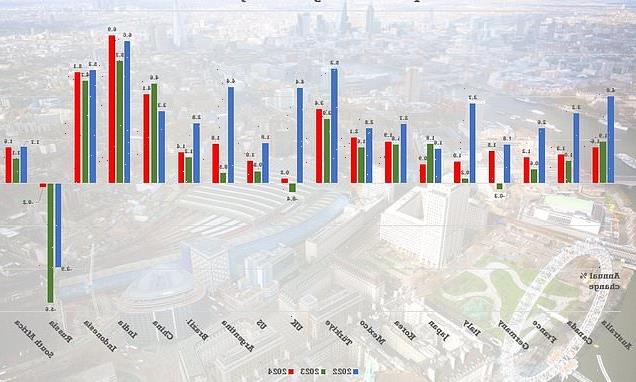 UK faces being worst-performing economy in the G20 apart from Russia next year, warns OECD

Britain faces being the worst-performing economy in the G20 apart from Russia next year, according to predictions today.

The OECD has unveiled a sharp downgrade in forecasts for the UK, with GDP now expected to shrink 0.4 per cent in 2023 and then grow just 0.2 per cent the following year.

Russia is the only other advanced economy slated to fare worse, with a 5.6 per cent decline next year as it is hammered by sanctions over the Ukraine war.

The international think-tank’s report found Germany is on track for a 0.3 per cent drop.

However, there is little cheer for other countries. Italy will effectively stall at 0.2 per cent growth, while the US will eke out 0.5 per cent.

GDP is anticipated to rise by 0.6 per cent in France – which is less affected by soaring gas costs due to its use of nuclear power – Canada will see 1 per cent and Japan 1.8 per cent. 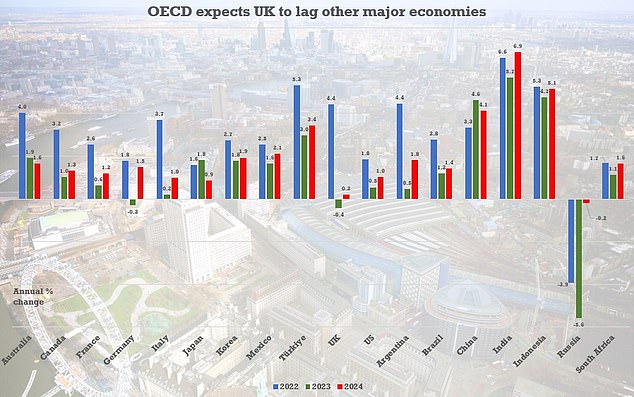 The OECD said Russia is the only other advanced economy slated to fare worse than the UK next year, with a 5.6 per cent decline next year as it is hammered by sanctions over the Ukraine war 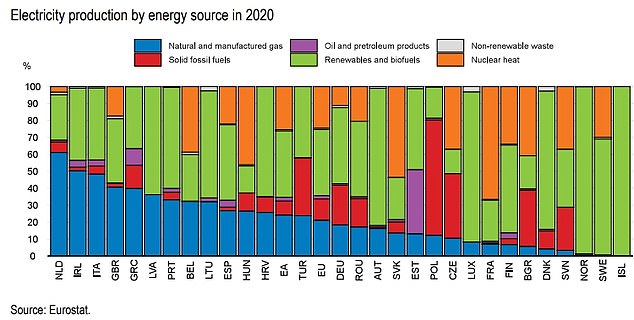 The OECD report shows that the UK is suffering from soaring gas prices more than countries such as France, which produces large amounts of electricity from nuclear power

The OECD also took aim at the UK Government’s support efforts to cap energy bills at around £2,500 until April, saying it will push up inflation and mean households and businesses will be hit by higher Bank of England interest rates as a result.

‘Better targeting of measures to cushion the impact of high energy prices would lower the budgetary cost, better-preserve incentives to save energy, and reduce the pressure on demand at a time of high inflation.’

It downgraded previous projections that the economy would actually grow by 1.8 per cent in 2023 to a fall of 1.4 per cent for the year.

The OECD sees UK interest rates rising further from 3% currently to 4.5% by April next year, while unemployment will lift from 3.6% to 5% by the end of 2024.

On Britain’s outlook, the international body cautioned: ‘Risks to the outlook are considerable and tilted towards the downside.

‘Higher-than-expected goods and energy prices could weigh on consumption and further depress growth.

‘A prolonged period of acute labour shortages could force firms into a more permanent reduction in their operating capacity or push up wage inflation further.’

The OECD warned that inflation is becoming increasingly broad-based 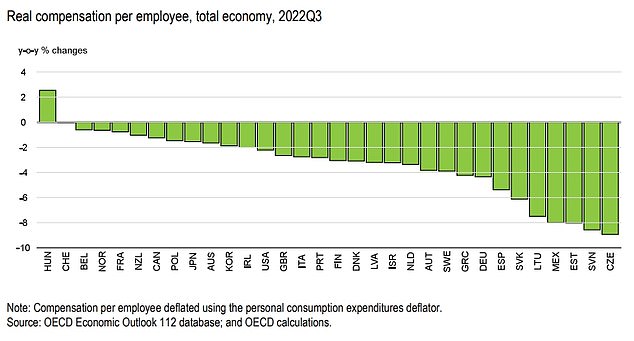 But it said households may choose to return to the jobs market to help boost stretched finances.

‘While households may seek to boost their real income by striking for stronger wage increases, they may also increase their labour supply either by returning from inactivity or by increasing working hours, which would be an upside risk,’ said the OECD.

While the UK is facing a prolonged recession, the OECD believes the world economy will avoid the same fate.

‘Our central scenario is not a global recession, but a significant growth slowdown for the world economy in 2023, as well as still high, albeit declining, inflation in many countries.’

It warned that ‘risks remain significant’.

‘In these difficult and uncertain times, policy has once again a crucial role to play, further tightening of monetary policy is essential to fight inflation, and fiscal policy support should become more targeted and temporary.’