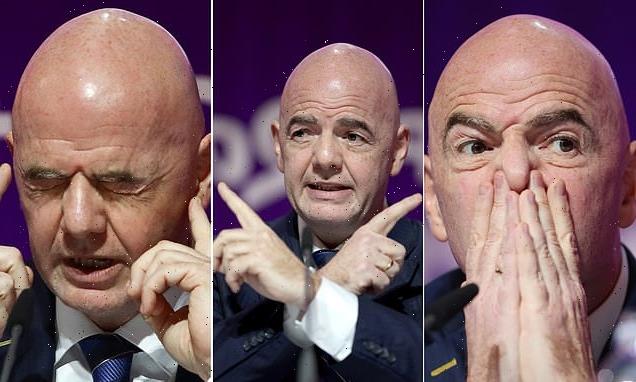 World Cup Wally’s most bizarre rant yet: FIFA chief Infantino tells UK to let in more migrants, orders Europe to apologise for colonialism and says he knows what it’s like to be gay, African or disabled because he had ginger hair (some time ago)

The World Cup boss was branded ‘absolutely appalling’ yesterday after ranting about feeling gay and disabled and demanding racist Europeans apologise for colonialism.

In a bizarre outburst on the eve of the tournament, Fifa president Gianni Infantino lashed out at Qatar’s critics, labelling attacks against the host country over gay rights and migrant worker deaths ‘profoundly unjust’.

But he was immediately condemned for ‘spouting nonsense’ as he sought to justify the controversial decision to award the competition to Qatar and told he was ‘colluding with despots’.

In Infantino’s extraordinary speech, ahead of this afternoon’s opening ceremony, he declared he ‘feels disabled, gay and like a migrant worker’ and knew what it was like to be discriminated against because he was bullied for his red hair and freckles as a child.

Fifa has been castigated for granting the World Cup to Qatar, where being gay is illegal and thousands of migrant workers are said to have died building the stadiums.

But the 52-year-old Swiss-Italian Fifa boss, apparently referring to colonialism, raged: ‘I think for what we Europeans have been doing the last 3,000 years we should be apologising for [the] next 3,000 years before starting to give moral lessons to people.’

Infantino’s eccentric 57-minute monologue was greeted with gasps at the National Convention Centre in the capital Doha, and outrage and ridicule beyond. 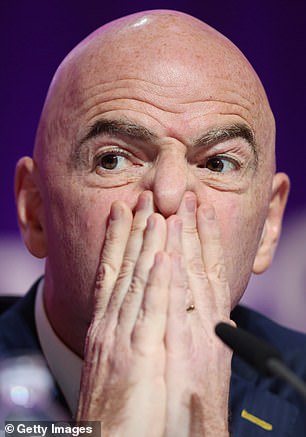 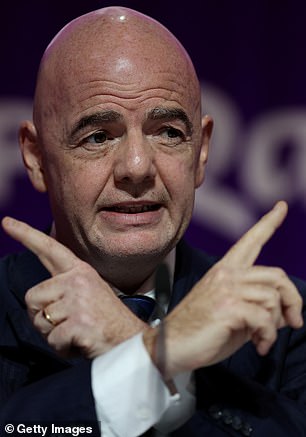 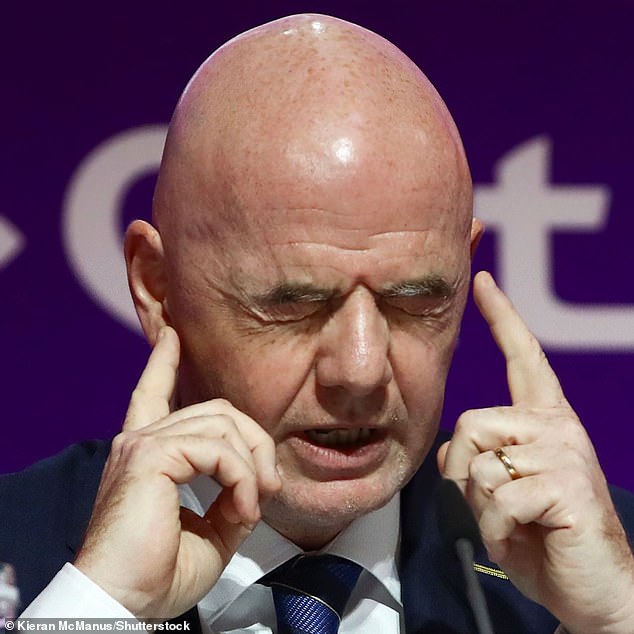 In Infantino’s extraordinary speech, ahead of this afternoon’s opening ceremony, he declared he ‘feels disabled, gay and like a migrant worker’ and knew what it was like to be discriminated against because he was bullied for his red hair and freckles as a child 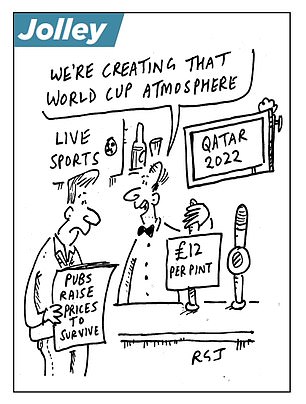 In what was expected to be a dull press conference on the eve of the tournament, the cumulative weight of multiple controversies suddenly seemed to snap something in Infantino, who veered dramatically off script to fulminate about the critics. He painted the billionaire royals who rule Qatar as a shining example to the world, urging other nations such as Britain to ‘do as Qatar do’ in letting in more migrants.

Glossing over reports of up to 15,000 migrant deaths on World Cup building sites and meagre 35p-an-hour wages for guards, Infantino blasted European ‘hypocrisy’ for not welcoming more migrants to their own countries.

His jaw-dropping lecture contrasted with his own warning earlier this month to teams to ‘focus on the football’ and not ‘hand out moral lessons to the rest of the world’.

Last night, the Fifa chief was lambasted from all points on the political spectrum – and England player Eric Dier was unhappy too.

Gay rights campaigner Peter Tatchell said: ‘It’s absolutely appalling. I have no doubt that he was pressured by the Qataris to say this.

‘He has given in to their demands and is colluding with the tyrannical regime. Fifa is now little more than a mouthpiece for the Qatari despots. It is giving cover for a sexist, homophobic and racist dictatorship.’

Mustafa Qadri, who runs human rights research group Equidem, added: ‘Infantino’s speech was an insult to the thousands of hard-working women and men who made the World Cup possible.’ Tory MP Julian Knight, who chairs the Commons digital, culture, media and sport select committee, said: ‘Clearly Fifa have got Stockholm Syndrome when it comes to Qatar.

‘They are desperate to justify themselves over their decision to hold a World Cup in a country the size of Yorkshire with no history of the game.

‘This is just obviously nonsense that he is spouting.

‘I am sorry if the painful truth about migrant worker deaths is a bit annoying to Fifa but they awarded the World Cup to Qatar under some very questionable circumstances and now they have to face the consequences.’ 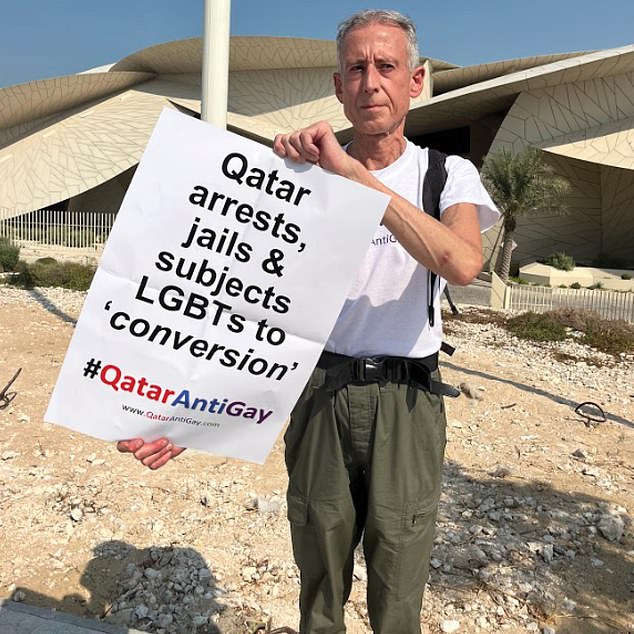 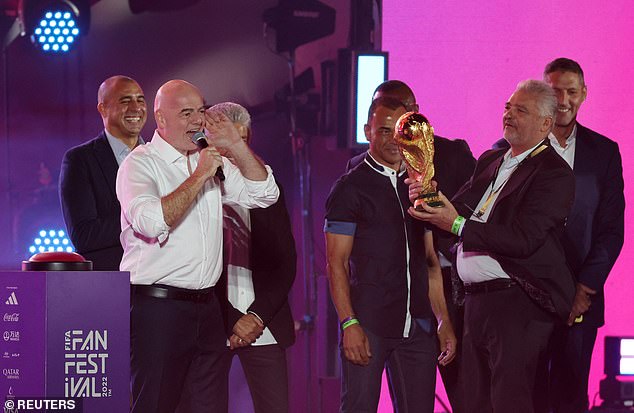 ‘I think for what we Europeans have been doing the last 3,000 years we should be apologising for [the] next 3,000 years before starting to give moral lessons to people,’ said Infantino (pictured at the Fan Festival at Al Bidda Park)

Lee Anderson, Conservative MP for Ashfield, Nottinghamshire, said: ‘I had red hair and freckles as a child. This guy needs to grow up and get a grip.

‘Instead of apologising for the next 3,000 years, the rest of the world should be thanking the UK for leading the way. This great country of ours has been a gift to the world. So he can ‘do one’.’

At the England training camp, footballer Eric Dier, 28, did nothing to dampen the row when he answered questions from the Press by saying: ‘A lot of things have happened that are disappointing. What has happened with the building of the stadiums is a terrible situation.

‘But at the end of the day we are footballers and not politicians. The World Cup was awarded in 2010 – I was 16 at the time. I carry the values that I have been given from my family, but at the same time I respect where I go.’

In a thinly veiled swipe at Fifa’s decision to grant Qatar the tournament, he added: ‘For me it’s important that football is in the right hands and cherished in the right way.’

In Infantino’s press conference, he defiantly suggested pariah country Iran could one day be given the World Cup too.

Asked about the safety of homosexual supporters – Qatar being ranked as one of the most dangerous places on earth to be gay – he said he and the organisers had ‘confirmed’ that ‘everyone is welcome’. 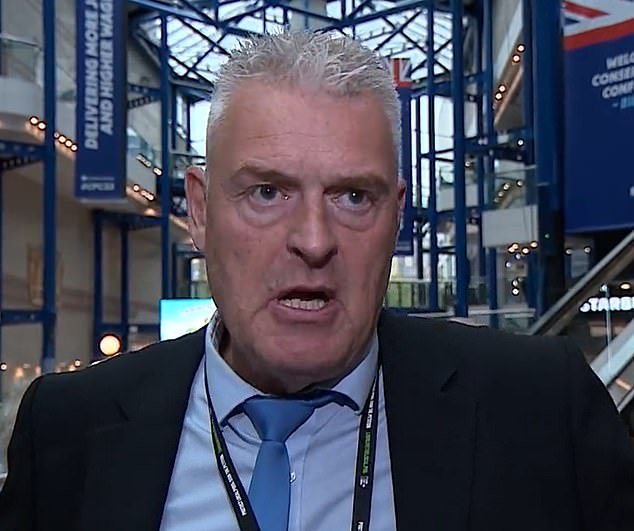 ‘I had red hair and freckles as a child. This guy needs to grow up and get a grip,’ said Tory MP Lee Anderson (pictured)

‘As a child, I was bullied because I had red hair and freckles. Plus I was Italian, so imagine.’

His emotional rant came after a difficult week for Fifa. On Friday, Qatar’s morality sheiks slapped a last-minute ban on beer in stadiums – leaving official sponsor Budweiser high and dry – prompting fans to demand refunds on their expensive trips to the Gulf nation.

A video clip went viral of Sky Sports reporter Melissa Reddy, who is in Qatar, delivering a furious riposte to the Fifa chief.

She branded his speech ‘misleading, disrespectful and offensive’, and added: ‘I think this will be the World Cup that really underpins just how dirty the game is.’ 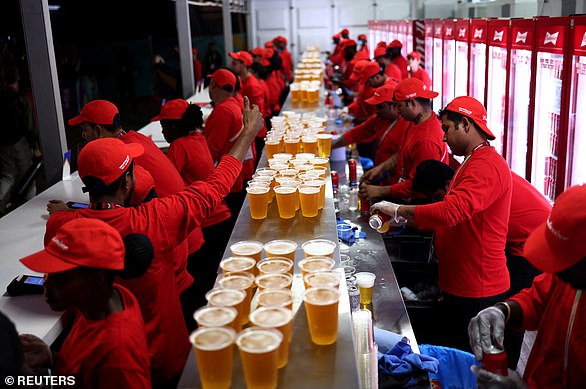 It is possible to find a beer in Qatar – but it takes some tenacity.

Parched football fans must wait until 7pm before being permitted an ‘official’ beer.

The Budweiser tent in the Fan Festival zone along Doha’s waterfront has about 50 fridges containing thousands of chilled cans. Supporters need to join a zig-zagging queue, which last night was taking 35 minutes to reach the bar.

Each can is half a litre (0.88 of a pint) and costs a sobering £12. According to the strictures laid down by the morality police, nobody can buy more than four drinks to avoid ‘public displays of excessive drunkenness’.

But crafty supporters worked out that nobody was checking, and it was possible to order round after round. Scott Parkes, 33, was the first England fan to get his hands on a lager. Mr Parkes, a brewery manager from Winchester, Hampshire, said of the price: ‘I’m going to make sure I enjoy this.’