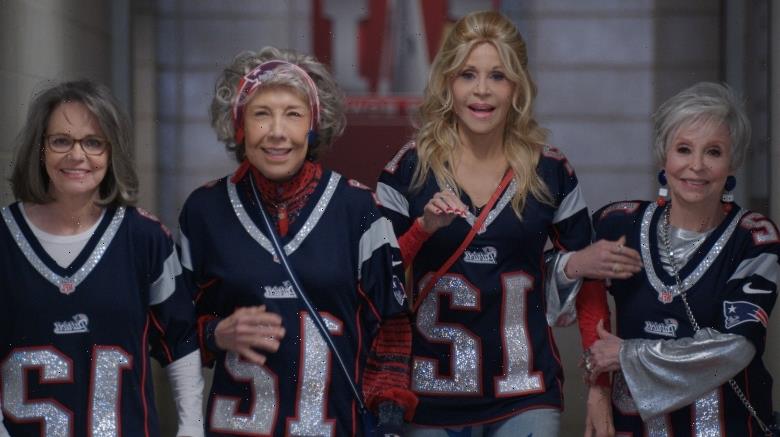 The first trailer for Paramount’s “80 For Brady” is like a Super Bowl ad for legendary comediennes, boasting a who’s who of pop culture icons. That includes “Grace and Frankie” cohorts Lily Tomlin and Jane Fonda, reuniting for the first time since their beloved Netflix sitcom ended in April. They’re teaming up with Sally Field and Rita Moreno on an offbeat road trip movie set against the NFL. The film from director Kyle Marvin — who you might recognize from the cast of AppleTV+’s “WeCrashed” — also stars someone named Tom Brady, who we’re told is some sort of athletic professional.

No joke though, “80 For Brady” seems like a decently silly and fun time: whether you’re a New England Patriots fan or an admirer of the aforementioned actresses. “80 for Brady” is based on the true story of four senior women who in 2017 all traveled to Houston to watch Brady and the Patriots take on the Atlanta Falcons in Super Bowl LI. Spoiler alert: the Pats won, with the Falcons managing to blow a 28-3 lead midway through the fourth quarter. Brady himself stars alongside the women and appears in the film reliving just one of his many glory days, as do his old teammates Julian Edelman, Rob Gronkowski, and Danny Amendola from that championship team.

The film focuses not so much on the sports saga you’d think would be at its center, but rather on the journey of these four-long time friends living out their shared dream of seeing Brady in uniform. As to how the movie came together, Tomlin revealed in a recent interview with People that she saw a video of the star QB calling one of the women to let them know that he loved the idea of a movie about their lives.

“Her grandson had pitched the idea to his agent and he was so taken with the story he was going to make a movie about their adventure,” Tomlin said. “I loved this woman…Her humor, her sweetness. I imagined my own mother getting a call from Tom Brady and the thrill she would get from that, and then to hear a movie would be made — my mother would be over-the-moon excited.”

“80 For Brady” doesn’t skimp on the celebrity guest stars either, with Billy Porter, Rob Corddry, Alex Moffat, Guy Fieri, Harry Hamlin, Bob Balaban, Glynn Turman, Sara Gilbert, Jimmy O. Yang, Ron Funches, and Matt Lauria all appearing in supporting roles. The comedy comes from a script by Emily Halpern and Sarah Haskins (Marvin and Michael Angelo Covino worked on the rewrite). Paramount is releasing the film in theaters on February 3, 2023. Check out the trailer below.