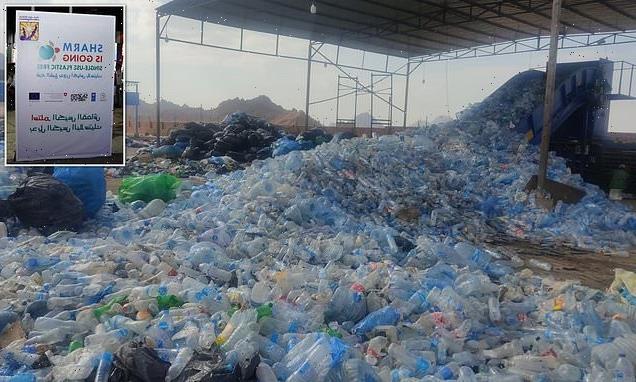 It’s the other side of COP27 which Rishi Sunak and his fellow global leaders are unlikely to see.

Egypt is ‘awash’ with plastic which blights towns and beaches across the country and degrades delicate marine ecosystems along its coasts, according to a recent study.

Many of the bottles pictured feature the distinctive red label of Coca-Cola, the global multinational that has been allowed to sponsor the event despite producing 120bn plastic bottles a year and facing claims it is one of the world’s worst polluters.

Sharm, which is visited by hundreds of thousands of British holidaymakers a year, was given a green makeover ready for the start of the COP27 conference, with a new fleet of busses that run on natural gas, charging stations for electric cars, a multi-million pound solar park, mass clean ups and a drive to use reusable plastics. 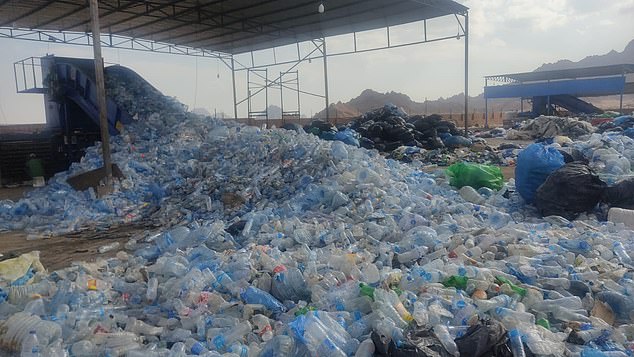 But the pictures taken last week at the South Sinai Flower recycling centre a short drive outside the town show how far that noble ambition is to reality.

And the vast majority of the nation’s discarded plastic never makes it to recycling.

Near the capital Cairo, environmental groups marked the start of Cop27 by building a ‘plastic pyramid’ using a million bottles recovered from the River Nile.

The 33ft high and 39ft wide structure – constructed in the Giza desert to mimic the ancient pyramids – was created by eco startup Zero Co with the help of Egyptian environmental group VeryNile.

The amount of plastic waste in the river means this is the second plastic pyramid the group VeryNile has built in just three months.

A study ‘Coming To Grips With Plastic, Egypt’s Waste management Challenge’ published earlier this year by the Economist Impact and the Nippon Foundation concluded: ‘Egypt is awash in plastic.

‘So are its river and coastal waters, including those of the Nile, the Red Sea and the Mediterranean Sea…

‘This leakage, as well as the large amounts of discarded plastic bottles, bags and other items littering Egypt’s city streets and tourist areas, is the result of a poorly functioning system of plastics management.’

Ola Elhoufy of YouThinkGreen-Egypt, which is seeking long term solutions to plastic use, said the lack of recycling facilities was a major problem

‘It’s not easy. Recycling is not commonplace in Egypt. 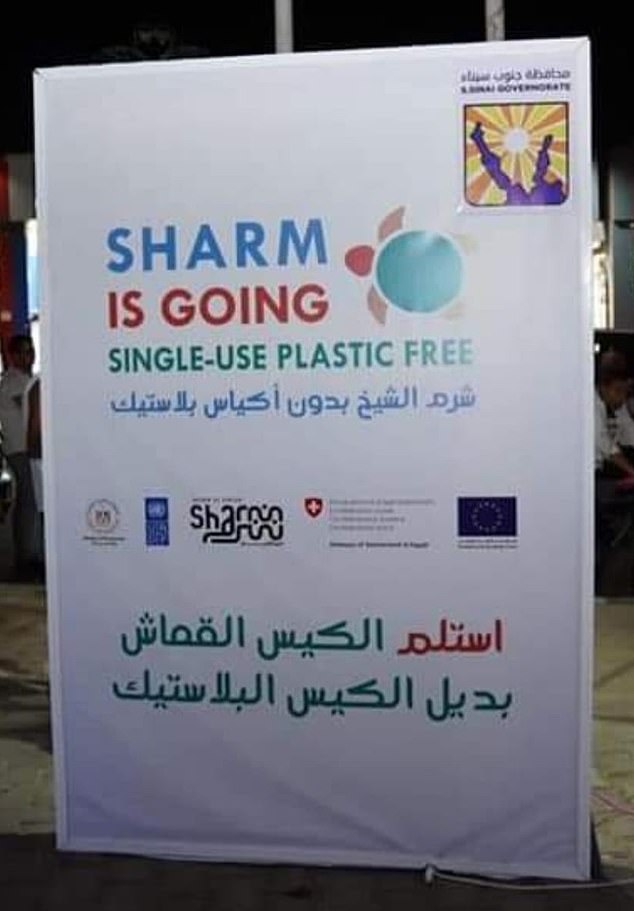 ‘It’s not done as a matter of course during garbage collections so it’s down to the individual to find a recycling centre, but these are often not easily available.’

Meanwhile over 75 per cent of fish bought from local sellers in Cairo contained microplastics in their digestive tract, a 2020 study found.

It made Nile River fish in the Egyptian capital ‘potentially among the most in danger of consuming micro plastics worldwide’, the report by researchers at Denmark’s Roskilde University found.

Georgia Elliott-Smith, an environmental activist who set up an online petition against the sponsorship which has been signed by 235,000 people said she’s calling on the U.N. to stop ‘enabling major polluters’ to ‘greenwash their brands.’

John Hocevar, oceans campaign director at Greenpeace USA, said: ‘It is baffling that Coca-Cola – the world’s biggest plastic polluter in all global brand audits – will sponsor this year’s COP.

‘Coca-Cola produces 120bn throwaway plastic bottles a year – and 99 per cent of plastics are made from fossil fuels, worsening both the plastic and climate crisis..

‘This partnership undermines the very objective of the event it seeks to sponsor.’

Coke sold 275 million drinks in Egypt in 2020 bringing revenues of £300,000,000. As well as the waste, Coke said Packaging represents around 30 per cent of our carbon footprint.

The United Nations, which organises Cop, has said the sponsorship was a matter between Egypt and the company.

Announcing the sponsorship with Coke in late September, Egyptian Ambassador Achraf Ibrahim, who is in charge of the financial aspects of COP27 , highlighted the major role played by the international private sector in promoting sustainable business models and supporting efforts to reduce greenhouse gas emissions and climate change.

A Coca-Cola spokesman said: ‘We share the goal of eliminating waste from the ocean and appreciate efforts to raise awareness about this challenge. We are prepared to do our part and have set ambitious goals for our business, starting with helping to collect and recycle a bottle or can for every one we sell – regardless of where it comes from – by 2030.