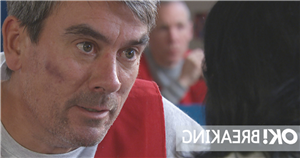 Emmerdale confirmed who killed Al Chapman on Friday night and it's not Cain Dingle in a major twist.

To which Cain, who was filled with a mixture of anger and grief, used the phone to set a trap for Al.

After thinking he was meeting Chas, Al was left confused to meet a steely Cain complete with shotgun and after beginning to fight it out, both their gazes fell upon the shotgun lying nearby.

During Tuesday's episode, it was revealed that Al had been hit by the bullet and had died as his lifeless body was discovered by partner Kerry Wyatt after she heard the shot.

Spotting Cain at the scene of the crime while holding the gun, Kerry gave a statement to the police and Cain was consequently arrested then later charged with the murder of Al.

During Friday's episode, Cain pleaded guilty, leaving his family stunned and wife Moira Dingle absolutely livid as she went to visit him in prison afterwards.

To which Cain insisted that "this is the way it had to be" as Moira said she was going to get Kyle and Isaac counselling as a result of the traumatic incident.

Warning her not to, Cain dropped a bombshell as he said: "You can't let Kyle speak to anyone because it was him Moira – I didn’t shoot Al, Kyle did."

It remains to be seen what happens next and whether Cain will keep protecting Kyle.