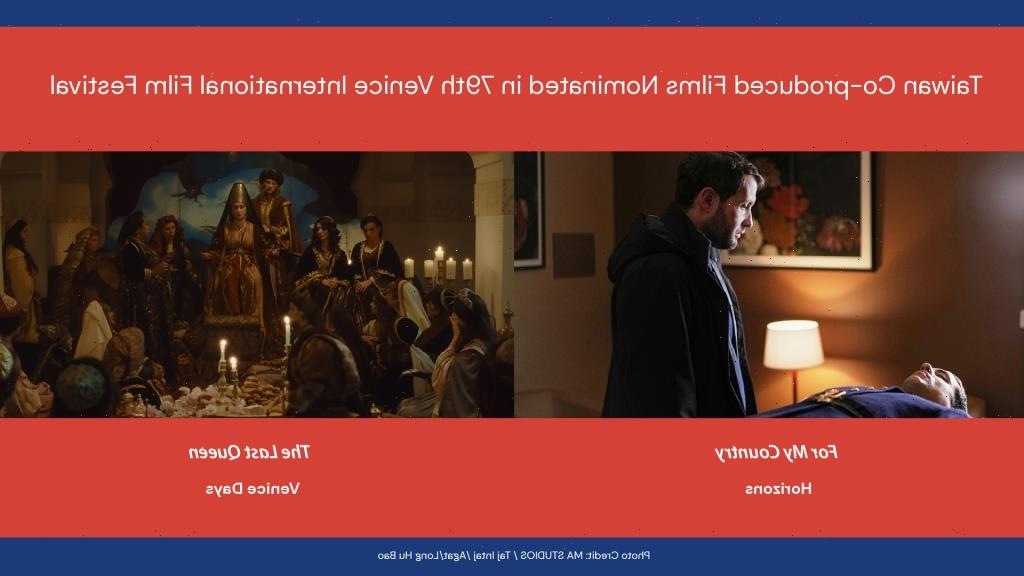 Taiwan’s reputation as a preeminent hub for international film and television co-productions has long been established, thanks to the success of titles such as “Life of Pi,” which won multiple Academy Awards®, and Martin Scorsese’s epic historical drama “Silence.” And at the prestigious Venice Film Festival, the East Asian island added two more projects to its impressive resume with the premieres of “The Last Queen” and “For My Country.”

Several factors make Taiwan an ideal partner, including its unique natural landscape. Mountainous terrain makes up roughly 70 percent of Taiwan’s land area, and its cavernous coastlines have been prominently featured in films like “Silence,” despite the script’s story being set in Japan.

There’s also the fact that Taiwan has been widely recognized for its progressive social climate.

“There is immense creative freedom and diversity in Taiwan,” says Zoe Wang, the director of global business for the Taiwan Creative Content Agency (TAICCA). “We are open to doing work about all kinds of themes and topics. We don’t expect global partners to abide by a set way of working, nor do we impose restrictions on them.”

Which is not to say that TAICCA takes an entirely hands-off approach. “We take part in the discussion, development and delivery of a piece of work, in order to produce something that resonates across cultures and is a win-win for everyone in the project,” Wang elaborates.

Perhaps most notably, Taiwan stands at the forefront of technology, equipped to support at all junctures of a production. Taiwan’s post-production talent contributed heavily to the 2022 French-Algerian film “The Last Queen,” overcoming the challenge of producing the unusual visual effects and audio textures required for a period drama set in 16th-century Algeria.

Justine O., the film’s Taiwanese co-producer, knew directors Damien Ounouri and Adila Bendimerad from previous collaborations, and says the duo specifically sought out Taiwan because of its talent: “It may come as a surprise, but it’s actually the directors who are committed and convinced that Taiwanese talent can deliver what they are looking for. In return, Taiwanese crews demonstrate how we can work smoothly with international teams.”

“The Last Queen” also received funding from Taiwan as part of the island’s initiative to invest in growing international exchanges in the creative industry.

The Bureau of Audiovisual and Music Industry Development under the Ministry of Culture covers as much as 30 percent of film production costs, up to NTD 30M ($937,500). The same initiative provides production support for television series, capped at NTD 20M ($625,000).

Already, TICP has borne fruit. “The Last Queen” was backed by the program, as was “For My Country,” a film by French director Rachid Hami. Both films premiered successfully in Venice, with the latter being submitted to the festival’s Horizons section. “The Last Queen” was selected for the Giornate degli Autori and received a special mention from the Authors Under 40 Award in Venice.

Other co-productions backed by TAICCA are in the pipeline and set to hit global screens. This includes “Tomorrow Is a Long Time,” a co-production of Taiwan, Singapore, France and Portugal that was directed by Jow Zhi Wei. There is also “Pierce,” a sports drama film that is a co-venture by Taiwan, Singapore and Poland that was directed by Nelicia Low. A TV series marking CJ ENM Hong Kong’s first major investment in Taiwanese television will also be unveiled soon.

Another reason Taiwan has become a prime choice for global collaborations is its ability to stay ahead of industry trends and embrace emerging media forms. Taiwanese director Singing Chen’s immersive VR film “The Man Who Couldn’t Leave” won the Best Experience award at the festival’s Venice Immersive event.

These productions are a testament to Taiwan’s appeal and ability to co-produce world-class projects, and the island is offering further impetus to form and deepen these sorts of intercultural relationships at the upcoming Taiwan Creative Content Fest (TCCF).

Since its inaugural 2020 showcase, the TCCF has made big strides. Organized by TAICCA, it serves as a nexus where Taiwanese talent and global players in the creative content industry can exchange ideas, discuss trends and make deals.

Now established as the region’s premier content market, this year’s TCCF will expand in its third edition, scheduled for Nov. 3 to 13.

TAICCA seeks to enhance TCCF’s matchmaking of Taiwanese talent and global partners. The goal: to cultivate an environment that amplifies Taiwan’s capabilities in the creative content industry and forge transnational partnerships.

A new domain, called “Pitching,” has been carved out for the 2022 TCCF, and will be one of four event pillars, together with the Market, Forum and Innovations sections. In doing so, all will showcase Taiwan’s appeal as a creative collaborator.

At the Forum section, some of the world’s top players will discuss the latest trends and demands of the creative market. A strategic partnership with Series Mania, the largest international television festival in Europe, will bring together France’s Mediawan and European channel Arte. The region will also be represented by Singapore’s Mediacorp, the Asian Animation Summit and Kidscreen.

“Aspiring to become the key hub of the Asian market, TCCF is still very much a place to do business,” says TAICCA’s Wang. “Through TCCF, we look forward to building a tight-knit community that allows Taiwanese talent and international industry leaders to connect and explore opportunities for collaboration.

“Each step of the way — even before any scene is written, any role is cast or the cameras roll — Taiwan has the capacity and ability to co-develop, co-produce and eventually see productions to fruition.”