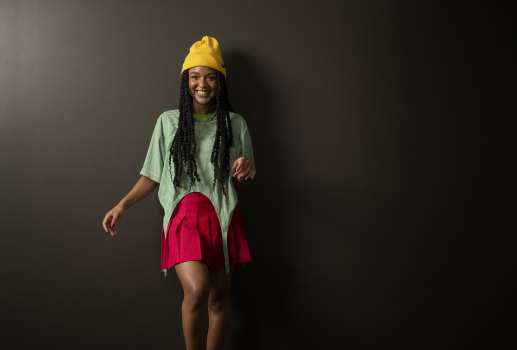 After years in the US, actress Aisha Dee is excited to be working at home again.Credit:Louie Douvis

As generous and engaging as Aisha Dee is in conversation, my interview with the actress hits an awkward impasse when I describe Cecilia — the troubled wellness influencer she plays in the new local horror flick Sissy, a mass murderer in a You’re Terrible, Muriel t-shirt — as a “psychopath”.

“Well, um, on behalf of Cecilia, I’m a little offended at being labelled a psychopath,” Dee laughs. “To me, the story was always about a girl finding her voice and finding empowerment… by killing some people. Like, as f—ed up as that sounds.”

That’s some next-level empathy. But I guess it’s the sort of thing actors have to do in order to portray their characters with fully realised emotional veracity. Yes, even the psychopathic ones.

The playful horror flick, by writer/directors Hannah Barlow and Kane Senes, bounces off Cecilia’s central trauma, a moment of high school madness that left her ostracised from her closest friends. Years on, a chance encounter sees Cecilia invited on a hen’s weekend in the bush that turns into a revenge-served-cold bloodbath. 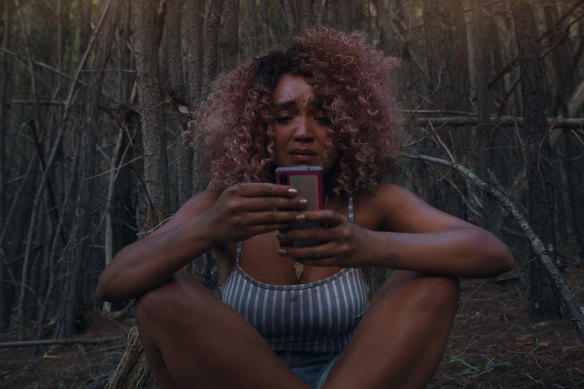 “I noticed as I was reading [the script] that I was becoming a bit offended on Cecilia’s behalf whenever the screen direction would say, like, ‘she smiles creepily’. I’d be like, ‘My God, she’s not smiling creepily, she would never do that!’” Dee chuckles.

“I couldn’t shake how I really felt about it, about Cecilia finally stepping into her power as a woman. To me, it was a story of a girl becoming a woman. I am aware of how that sounds, but that’s really how I feel.”

It was in June, during her brief trip to Sydney for Sissy’s local premiere at the Sydney Film Festival, that I spoke with Dee about the film. Both a classic slasher flick and a sardonic send-up of influencer culture — or, at least, the fuzzy divide between illusion and truth on social media — the film also revels in the pulpy horror and handcrafted visual effects of, say, early Sam Raimi and Joe Dante (you’ll wanna be in a cinema, giggling with others, when the head explodes).

Shot on the outskirts of Canberra in just 28 days, the low-budget feature impressed on the horror film festival circuit following its premiere at SXSW in March and quickly sold its streaming rights to horror streamer Shudder. Last month it was nominated for an AACTA Award for best film, with Dee also singled out for lead actress in a film, where she’s up against names such as Tilda Swinton and Leah Purcell.

“Honestly, I’m just so f—ing proud to be a part of this movie,” says Dee. “We’re a tiny movie, and the reality of independent filmmaking is, like, probably no one will ever see your film. I was completely fine with that being the reality because I’m pretty pessimistic anyway. But the fact people are paying attention and expressing so much love for the movie is cool.” 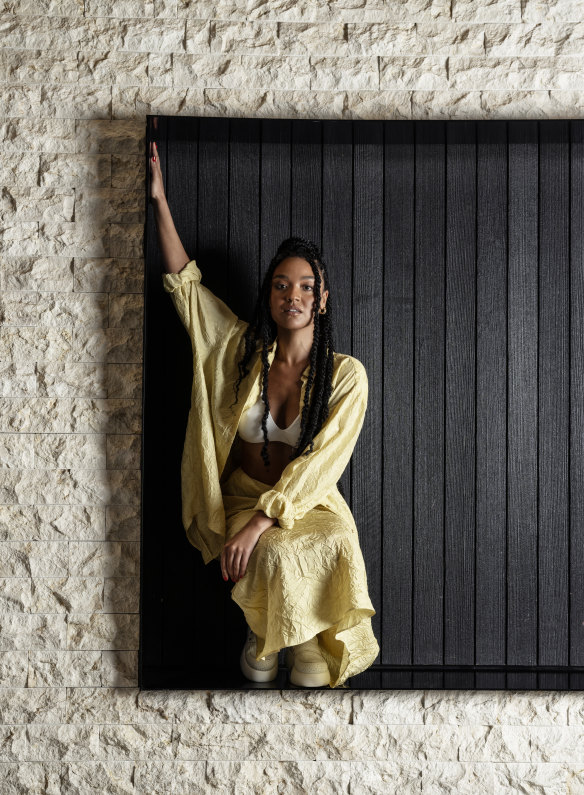 Dee moved to the US at 17 to further pursue acting: “Working in Australia was complicated,” she says.Credit:Louie Douvis

For Dee, Sissy marked an overdue return to Australia; the film is her first role in Australia in more than a decade. The 29-year-old, originally from the Gold Coast but now based in Los Angeles, started her career on the kids TV favourite The Saddle Club when she was 13 — but “working in Australia was complicated,” she says.

Born to a white mum who was an opera singer and an African-American father, she moved to the US at 17 because the local industry didn’t know what to do with her, a young biracial actress, in Australian TV and film.

“I was actively told by people in the industry that there wasn’t anything for me here and that I should leave,” Dee recalls. “So I was like ‘okay then, I guess I will!‘. I mean, if someone’s like ‘please leave!’ , I’m gonna go! I remember a few times when [casting agents] said they didn’t feel I was the ‘Australian girl next door’. That’s just how the industry was for so long.”

Australian screen history is filled with stories of talented, local actors of colour, such as Dee, Geraldine Viswanathan, Chris Pang, Nathalie Kelley and Natasha Liu Bordizzo, among others, who became stars (or, at least, working regulars) overseas after escaping whitewashed screens. Despite the increased opportunities for substantial work, Dee’s move to the US had its own challenges.

“People often didn’t believe I was Australian, they thought I was pulling their leg or something. Because even there, they’ve been led to believe that Australians look a certain way,” she says.

“Also, just being biracial and being raised in this very specific culture, where I didn’t really have any connection to my blackness, was interesting. I was raised by a single mum, it was just us, so all that was part of the challenge. Going to the States, I was able to expand my mind in more ways than just one — beyond the industry, just in life.” 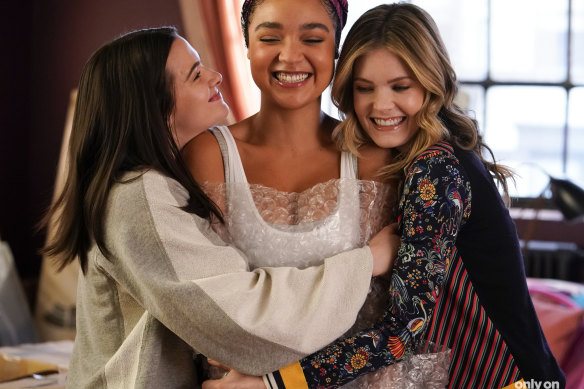 In 2017, Dee landed her most recognisable role, playing outspoken Kat Edison on The Bold Type, a sort of Sex and the City set in the world of glossy magazines, that ran for five seasons until mid-2021. “It’s funny, The Bold Type was so much more popular in Australia than anywhere else; it’s definitely been a special and transformative part of my life, for sure,” says Dee. She calls Katie Stevens and Meghann Fahy, her core co-stars on the series, her “lifers”. “We went through a second puberty on that show, like sisters.”

In 2020, while still working on the show, Dee also tentatively launched a solo music career, recording breezy, downtempo R&B. “Right now, I kind of like having it just for me; I can release the songs when I’m ready, or they can just stay on my laptop for two years like it is now,” she laughs. “I’m gonna release them, I think. I can’t keep procrastinating. I’m in my Saturn return right now. I don’t know if you’re into astrology, but it’s when all the big stuff happens. And I feel like this Saturn return is teaching me about allowing myself to be vulnerable.”

Arguably, the move overseas worked for the best for Dee, in terms of both professional success and to “find myself as Aisha,” she says. But does she feel any resentment over the fact she had to fly halfway across the world to achieve it, away from family and everyone she knew at such a young age, just because the local screen industry was too small-minded to provide those opportunities here? 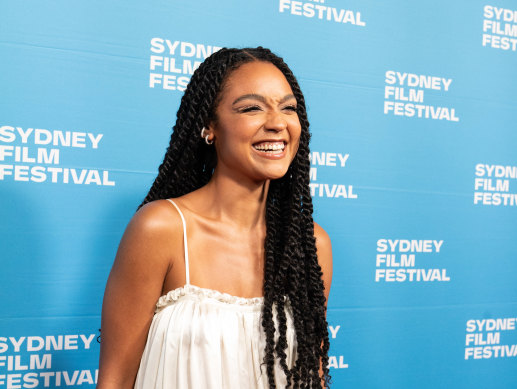 Dee at the Sydney Film Festival in June, where Sissy had its local premiere.Credit:Flavio Brancaleone/The Sydney Morning Herald

“I try not to feel angry, or resentful, because I don’t think it’s productive,” says Dee. “But it does motivate me, and it does make me really determined to come back and work here again.”

More than a decade after she left home, she’s been buoyed by her return experience. Alongside Sissy, she also picked up another gig in Melbourne filming Safe Home for SBS, a four-part miniseries about staff in a family violence legal centre, which begins airing next year.

“I look around Australia and I see we’re so colourful and diverse, a melting pot, and yet for some reason, our film and television hasn’t reflected that. But it feels like it’s slowly changing,” says Dee.

“Sissy was the first time I came back and did an Australian production in over a decade, and I was very surprised that they were even open to having me be their lead. It feels like evidence that the film and TV industry here is evolving, and I would really love to be a part of that.”

Sissy is in cinemas on Thursday.