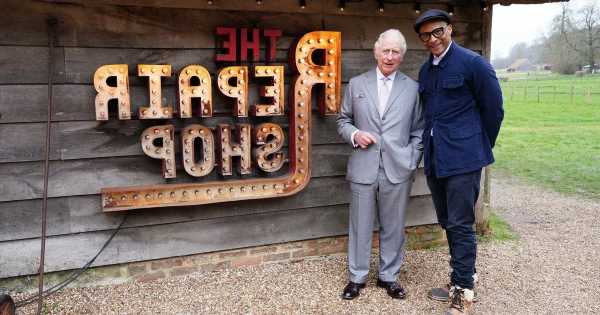 Viewers of The Repair Shop have been singing their praise of presenter Jay Blades and special guest King Charles, with some joking that there may be new double act coming to steal some of Ant and Dec's popularity.

Tonight's special episode of The Repair shop saw the King, who was the Prince of Wales at the time of filming, visit the warehouse to ask the experts for help restoring a piece of pottery made for Queen Victoria's Diamond Jubilee and an 18th century clock.

The King, then Prince, seemed to be in high spirits as he showed Jay and the filming crew around Dumfries House estate in Scotland, causing some fans to take to social media to share their love of the somewhat unlikely duo.

One fan wrote: "King Charles and Jay Blades is the double act we didn’t know that we need."

While another compared the duo to Ant and Dec, posting: "Watch out Ant & Dec. What a great double act these two are."

And a third joked: "OK, who had Jay Blades and King Charles being best mates on the 2022 bingo card?"

The hour long special episode aired as part of the BBC's centenary celebrations, as the broadcasting service turns 100 this year.

During his appearance on the show, the King opened up about his love of clocks, saying: "To me, I just love the sound, the tick-tock but also if they chime, that’s why I love grandfather clocks.

"I find it rather reassuring in a funny way and they become really special parts of the house… the beating heart of it. So that’s why they matter to me."

Speaking about his grandmother, the Queen Mother, he added: "I’m afraid it is something I learnt from my grandmother, she had great fun putting a few together and trying to get them to chime at the same time in the dining room, which made it very enjoyable because everybody had to stop talking."

Alongside the 18th century clock, the second item that needed fixing was a piece of pottery made for Queen Victoria’s Diamond Jubilee.

Revealing how this came to be damaged, he shared that someone had opened a window, causing it to fall out, joking: "They didn’t own up."

Charles became King following the death of his mother the late Queen Elizabeth II in September, and his official coronation will take place on May 6 2023.