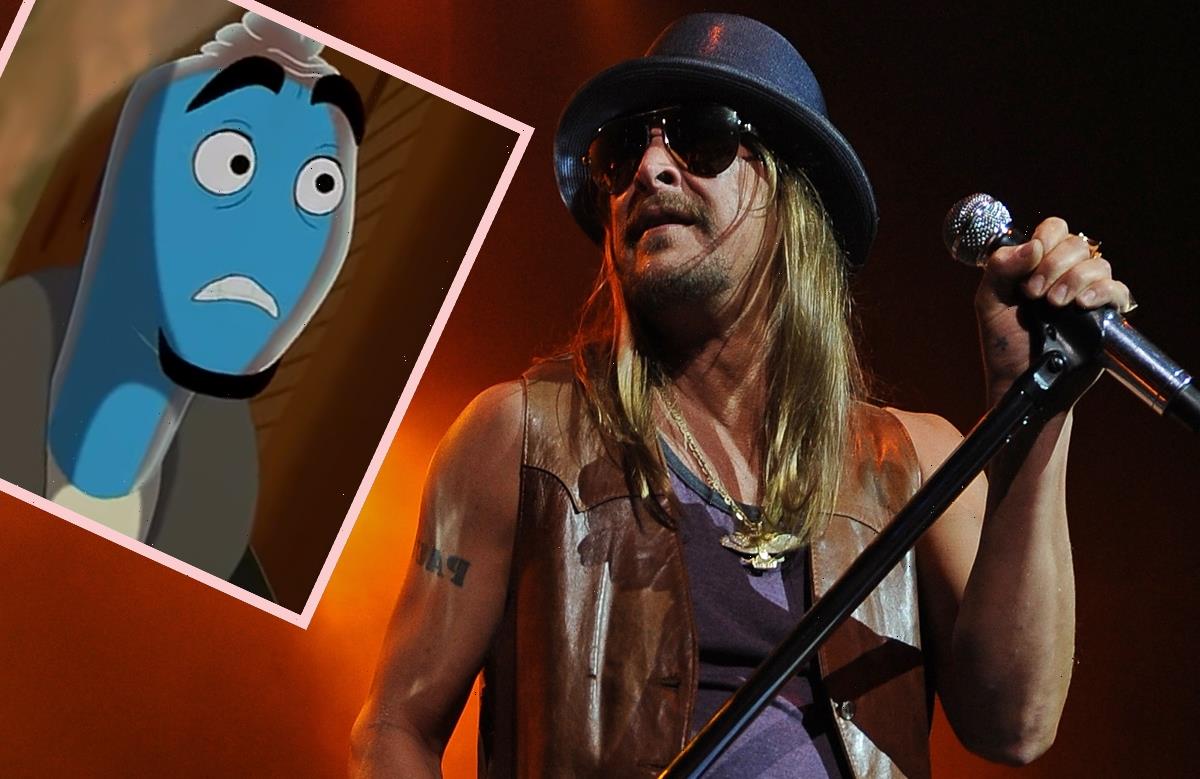 We are shocked — SHOCKED we tell you — to hear Kid Rock might not be such an upstanding guy!

In recent years the rocker has become known more for his politics than his music. Donald Trump bashed Hollywood and celebrity elites — but also surrounded himself with celebs any time he could. It’s just the only people he could ever get were C-listers like Dean Cain and Kevin Sorbo. Kid Rock was one of these stars.

In fact, he even claimed later the president asked for his advice on Isis and North Korea — and he was thankfully self-aware enough to know he had no business being asked such a question!

Most recently Kid (real name Robert Ritchie) was seen palling around with Kanye West and Ray J at the premiere of conservative pundit Candace Owens‘ new movie. But he’s actually drawing controversy not for something he did in the past couple years but for something he did over two decades ago.

Social media users have recently discovered the lyrics to a song the Bawitdaba singer performed on the soundtrack to Osmosis Jones. For those who don’t remember, the 2001 cartoon movie was a buddy cop comedy for kids in which a white blood cell and a cold pill (played by Chris Rock and David Hyde Pierce, respectively) team up to defeat a virus inside Bill Murray‘s body. At one point the pair investigate a nightclub called The Zit, in which a band called “Kidney Rock” are performing. Germ versions of Kid Rock and Joe C can be seen performing a song called Cool, Daddy Cool. It’s the lyrics that people are just now learning.

There’s references to “hos” and drugs and alcohol — all things that don’t really fit the film’s PG rating — but there’s one line in particular that would be disturbing even if it weren’t in a kids’ movie. But doubly so since it is. Kid Rock and Joe C rap:

(Note: That last bit is in parentheses because Joe C says it.)

So yeah. Kid Rock actually did a lyric for a song on a kid’s movie soundtrack that boasted about statutory rape and liking ’em “underage.” Wow. Twitter and TikTok users started posting about it earlier this month, and it’s gone pretty viral — probably the first time anything to do with the box office flop was a hit!

Folks who knew the movie from their childhood were in disbelief, but one by one as they tracked down the song, as we did, they saw this was all too real.

There’s a good reason none of us remember it, though. Those lyrics can’t be heard in the actual film, as the song is edited down. But you can see the cartoon versions of them performing the full thing — which is on the film’s soundtrack — in the “music video” (below):

We have so many questions. First off, was that line edited out just for time? Or because by the time they were finally editing the movie someone had finally listened to the song Kid Rock turned in?? Second, why is it still on the soundtrack — to a kids’ movie — totally unedited? Ew! Third, and perhaps this is the real question… WTF?! How did this get on a kids’ movie in the first place?

Did an executive think, “Kid Rock? Like rock ‘n’ roll for kids? Sounds perfect!” Did they think he was related to star Chris Rock, and they were doing him a favor? Also… what was Kid Rock thinking with those lyrics? Did the filmmakers tell him to do for Osmosis Jones what R. Kelly did for Space Jam, and he took it the wrong way?!

Not so hilariously, as it turns out, R. Kelly is also on the soundtrack for the movie. Because of course he was. He loved performing for children… for some reason. Of course, the R. Kelly track has been removed from the Spotify version of the album.

The thing about these lyrics is, there’s just no way to misinterpret them. It’s right there, he wrote about liking underage girls. Gross. And they put it on the soundtrack to a kids’ movie. MORE gross.