Daemon Targaryen sure was up to stuff in the House of the Dragon season finale—good, bad, and chaotic. I don’t even know if I can get into the whole not being present for his wife while she was in labor thing, because that was not great. Or the choking his wife thing. Also very bad! But one of the strangest things (using the word strange very specifically here instead of, IDK, problematic) he did was start singing in High Valyrian to a dragon we’ve never seen before. What’s the deal with Vermithor in the House of the Dragon finale? Daemon’s side mission sets up a major plot line in House of the Dragon season 2.

Vermithor was previously ridden by King Jaehaerys Targaryen, who sat on the Iron Throne immediately before Rhaenyra’s dad King Viserys Targaryen. He’s been chilling on Dragonstone since Jaehaerys died about 30ish years before the season 1 finale. He is the second biggest dragon alive at this time in Westeros, next to Aemond’s big gorl dragon Vhaegar, and also one of the oldest. 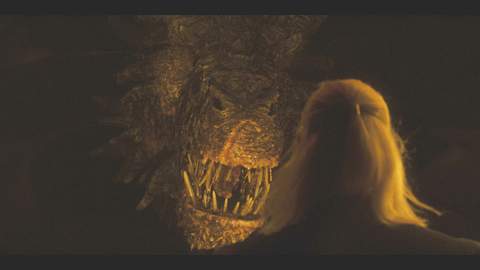 What was Daemon doing with Vermithor?

It did give former West End star Matt Smith a chance to dust off his singing chops… but what was the point? Was he doing a spell? Was he trying to upgrade his dragon and bond with this one instead? That’s rude to his dragon, Caraxes. Also rude, or maybe just ironic, that Daemon is so nice to this dragon called the “Bronze fury” when he himself called his first wife the “Bronze bitch.”

Based on what happens in Fire & Blood, my best guess is that he’s seeing if Vermithor is down to come out of retirement and either fight for the Blacks or breed younger dragons who can go to war. We’ll see in season 2.

What happens to Vermithor in the book?

Spoilers, obviously! According to Fire & Blood, during the Dance of the Dragons, Vermithor gets a new rider named Hugh, a bastard and blacksmith local to Dragonstone. This is part of an event known as “The Sowing,” “The Red Sowing,” or “The Sowing of the Seeds” depending on who you talk to in Westeros.

At a low point during the Civil War that begins with King Viserys’ death and really kicks off when Prince Lucerys Velaryon a.k.a. Luke is killed, Prince Jacaerys Velaryon a.k.a. Jace puts out a call for Targaryen bastards or “dragonseeds” to claim a dragon and join the fight. In exchange, potential dragon riders were offered titles, land, and money. (Having your own dragon has also got to be a good perk.) What happened next was like Charlie and the Chocolate Factory, The Sword in the Stone, and The Hunger Games combined. Many tried to bond with the dragons, many died and/or suffered severe burns, and a lucky few succeeded. This also, as you can imagine, drudges up some drama. Noblemen’s bastards in Westeros typically mean that somebody was cheating on somebody.

Hugh must have Targaryen blood somewhere because the old dragon allowed him to mount and take him into battle. But Hugh becomes power-hungry, starts calling himself Hugh Hammer or “Lord Hammer,” and attempts to do a coup and crown himself King. Both he and Vermithor are ultimately killed in battle. So this dragon does have a part to play in the drama to come, but maybe not the way you expected. Kinda feels like Daemon should have let Vermithor enjoy his nap.