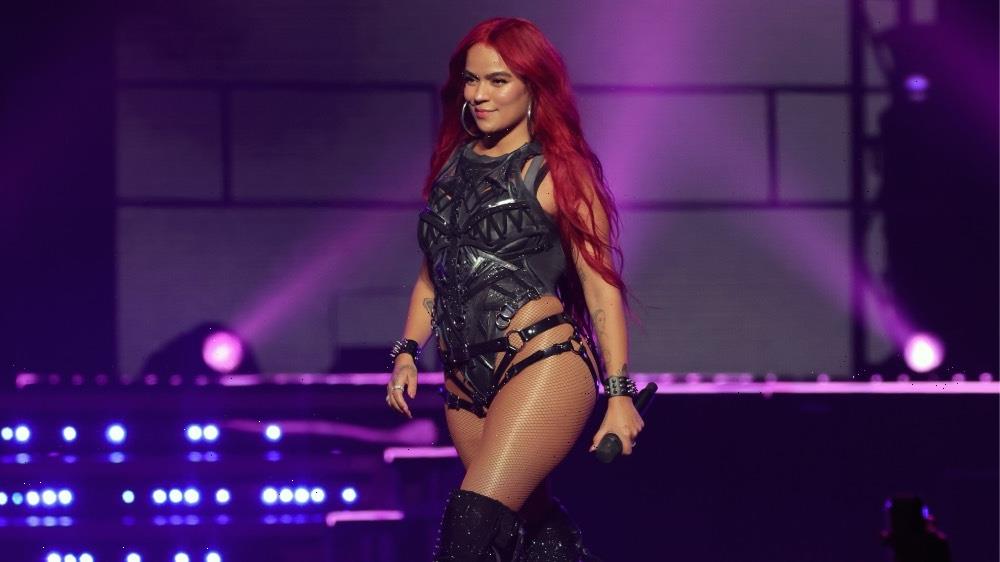 Colombian reggaeton star Karol G has achieved what a select few of her countrymen can lay claim to: she is a household name in the U.S. Credit the American teenagers who’ve embraced La Bichota as one of their own, with admiration and respect.

“I feel like a great part of my success so far has been that connection: it has taken me a lot of effort and sacrifice to get to where I am today,” she tells Variety. “Lots of people know that and I’m lucky enough that people are getting to know me and have tasked themselves with learning my story.”

When Variety caught up with Karol, it was before she hit the stage on the North Carolina stop of her 30-date $trip Love Tour — her biggest trek to date and her second round-about in the U.S. in the past 12 months (she’s also managed to tour Latin America in between).

“It’s super heavy work if I’m being honest,” she says, pointing out that most nights she’s on stage for a little over two hours. “At the moment, out of these 30-something shows we’re doing — we’re on the eighth or ninth one and I feel like we’ve already been halfway done. These stadiums are much larger, you have more show time, more music and I’m going to be super honest: I get on stage and I quite literally cannot contain my energy, I let myself go completely and sometimes too much.”

Karol’s music, carefully crafted for rule-breaking femmes (“I’m not here for you to fall in love with me, baby”), paired with the large-scale spectacles built for arena stages make for the type of all-night affairs regularly followed-up with Bichota-themed afterparties. Fans of all ages in red wigs and stilettos make up the sea of concert-goers and on stage, Karol makes her grand entrance inside a floating barb-wired heart, backed by a team of pole dancers who compliment her every note with the ease of a booty pop.

She confesses the trek itself has been “more exhausting” than ever. Still, the energy of the $trip Love Tour, Karol says, is unlike anything she’s experienced before. “It’s a much wilder ambiance, it’s super sexy and celebrates all aspects of our personality as women. I’m not saying that my show is the best there is but, to put it simply: I feel that when people come to my shows they what I get out of it in some sense…we share the same screams, cries, yells, dances, excitement, joys..”

Karol came up locally around her native Medellín. Alongside her father and former manager, Guillermo Giraldo, she performed at events and festivals and networked. That led to work as a backup singer for one of reggaeton’s earliest leaders, Reykon, and receiving major co-signs from budding male counterparts in the genre like J. Balvin and Nicky Jam.

“In Colombia, there’s so much local talent and honestly, we listen to our own music the most,” Karol says, highlighting her hometown shows at the Atanasio Girardot Stadium as “the most incredible and special experience I had in my life.” She continues, “I’m proud of the fact that my house loves me, they feel proud of me because I have a great sense of belonging to my country. I love saying everywhere I go that I am Latin, that I am from Colombia.”

It was also her father’s taste in music, and his own goals as an aspiring musician and singer, that helped cultivate Karol’s unfettered method of music-making. “I specifically remember him listening to Yuri, Myriam Hernandez, Juan Gabriel, and he listened to classics — vallenatos, Colombian even Puerto Rican salsas and Cuban music. He loved Metallica, he listened to Nirvana, and would watch their live performances and music videos…”

This brings to mind the post-punk cover of her hallmark “Bichota” by Chilean band Friolento , which went viral earlier this summer. Says Karol with a squeal: “O sea, just imagine my reaction when I first heard that song! I was literally going insane. I am always listening to different versions people make of my songs, especially my favorite song. I thought it was super original and people do reggaeton or acoustic versions, but this one really, really truly fascinated me.”

In her own vault, Karol admits she’s got a few older songs that teeter between urban music and various other styles (“I tried one with tango, it was a song that never came out but I loved it”). And so long as a song or project doesn’t feel “forced,” she says she’s open to the crossover experience. She recalls being given the option to record the electro banger “Don’t Be Shy” with Tiësto in either English or Spanish and feeling inclined to take the opportunity to try English, not only as a personal challenge but to see where the song would land globally seeing the rise in popularity of Latin music and despite the fact that “Latinos don’t expect us to make music in English now that even English-speakers are enjoying songs in Spanish.”

Karol’s star power is also bleeding into other entertainment sectors, namely on screen. It was recently revealed that the singer had been offered a role in the “Aquaman” movie, but in the end turned it down because it would mean putting a halt to the release and promotion of her Grammy-nominated sophomore album “KG0516” and her first U.S. tour, which grossed an impressive $10.9 million across 24 shows. Nonetheless, the aspiration remains on her radar. “I would want to be cast as a villain,” she says. “I don’t know why, but I’ve always wanted to play a character that I am the opposite of — it would be an incredible challenge.”

Karol’s $trip Love Tour will wrap in Vancouver, BC on Oct. 29 and in March 2023, Karol will bring the tour to Puerto Rico’s El Choli Coliseo.