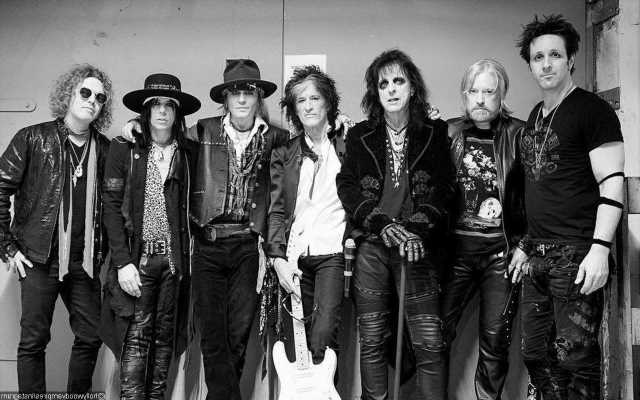 The rock supergroup, which consists of the ollywood actor, Cooper and Aerosmith rocker Joe Perry, are to play shows across Britain in 2023 after canceling dates in 2020 due to the COVID-19 pandemic.

AceShowbiz -The Hollywood Vampires are to tour the U.K. next summer. The rock supergroup – which consists of Hollywood actor Johnny Depp, Alice Cooper and Aerosmith rocker Joe Perry – are to play shows across Britain in 2023 after being forced to cancel dates in 2020 due to the COVID-19 pandemic.

The Hollywood Vampires sees the trio, accompanied by guitarist Tommy Henriksen, play songs in tribute to the “great lost heroes of music” and perform original material from their two album releases. Discussing the new tour, Alice said, “Well, it’s already been three years since the Vampires have toured because of Covid. Also, Johnny has his movies, Joe’s in Aerosmith and I’m in Alice Cooper, so we have to look at that whole thing and see when we can all get a month or two off where we can go out and tour. And, we are going to be doing that, next summer coming up, 2023. I can’t wait to get back with the guys, I really love being in that band. My band is great and wonderful, but playing with the Vampires is an entirely different situation.”

The “School’s Out” rocker continued, “I don’t necessarily do any theatrics at all, I’m just the lead singer, in a band, and the band just happens to be one of the best bands around! It’ll be great to see Johnny and Joe and Buck and Chris and all the guys. We’ll be rocking these places, especially the UK, I can’t wait to get to the UK! Lock your doors, put garlic all around, because the Vampires are coming.”

Johnny has returned to the world of music following his high-profile court battle with ex-wife Amber Heard earlier this year. As he awaited the verdict on his US defamation case – which ultimately went in his favour – the “Pirates of the Caribbean” actor performed shows in the UK with rock legend Jeff Beck. The pair then released a joint album, called “18”, which featured a number of classic rock covers as well as two original tracks.