Finance Minister Katy Gallagher says some programs in infrastructure and other government departments will need to come to an end in a nearly $22 billion savings audit that will continue in future budgets.

The government’s first budget, which will be unveiled at 7.30pm on Tuesday night, will detail more than $21 billion in savings found from either ending programs or delaying others in a bid to keep government expenditure down. 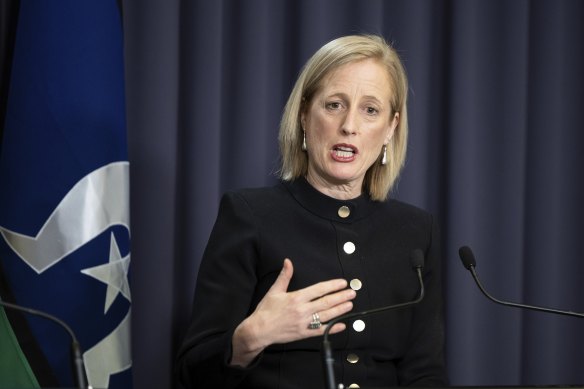 Economic forecasts for the next financial year have been downgraded, with Australia’s economic growth now expected to be a full percentage point lower in 2023-2024 and house prices expected to fall by 20 per cent.

Inflation is also expected to remain higher for longer, Reserve Bank assistant governor Christopher Kent said on Monday morning – about 0.2 per cent higher over the next few years – due to the lower value of Australia’s dollar and resulting pricer imports.

And while the government is using the budget to lock in its election promises – which would cost $2.4 billion, without including new announcements – high and rising interest rates have also put pressure on the government by increasing the size of its debt repayments.

Speaking on ABC Radio National, Gallagher said the savings or spending delays were being used to fund some of Labor’s priorities, to prevent the need to add new funding.

“We are finding savings across government,” she said.

“We have gone to every single department and asked them to look at their programs to identify programs that don’t need to be done any longer or don’t align with government priorities, and where we’ve been able to return some money to the budget we’re doing that.”

Gallagher said there had been particular challenges with projects in the infrastructure portfolio, due to issues with accessing material and workers.

“It’s very sensible to look at where we can find some reprofiling of that, but there will be also some genuine savings in that portfolio,” she said.

The Finance Minister said reprofiling meant shifting the start date for projects out a couple of years before making any decisions.

“There’s definitely projects that we will be stopping,” she said.

Opposition finance spokeswoman Jane Hume said she was concerned the government was potentially cutting billions of dollars from projects expected by local communities.

“What we’re concerned about is that there is a political lens rather than an economic lens that’s been put over these cuts,” she said on Radio National.

Hume pointed to the government’s $2.2 billion pledge for Victoria’s suburban rail loop project, which has not been examined by Infrastructure Australia.

“If Labour are genuine about this idea of quality spending, as opposed to just spending for its own sake, well then how on earth they could support a $2.2 billion investment in a suburban rail loop is making us all scratch our heads,” she said.

“That does sound like very much a political decision, rather than an economic one.”