A baffled mother arrived home to find her house had been mistakenly encased in scaffolding.

Sarah Johnson, who lives in Walnut Drive in Plympton, Plymouth, was out at the time workmen arrived.

Courtney Chapman, her neighbour, was first to alert her to the ‘bizarre’ situation and assumed her landlord had organised repair work.

It turned out, Ms Johnson’s street Walnut Drive had been mistaken for the similarly named Walnut Gardens, something Ms Chapman previously pointed out but had been dismissed.

On September 29, Ms Chapman asked what work Ms Johnson was getting done to her house and sent her a photograph of it covered in scaffolding.

Refusing to believe it, Ms Johnson says she still thought it was a joke or even a filter. 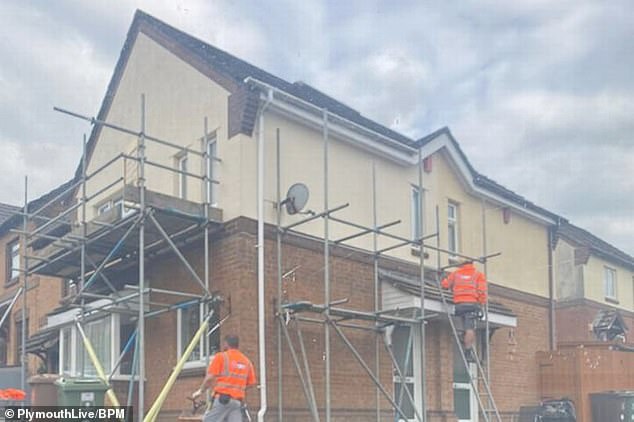 She said: ‘On my way home my neighbour rang me to ask what’s going on with your house and at first I thought she was winding me up. She sent me a photo and I still thought it was a joke, I even thought it was maybe a filter.’

However, she soon realised it was for real. She thought perhaps her landlord had organised some repair work but she said even he ‘didn’t have a clue what was happening either’.

Luckily, Sarah says she could see the funny side, so much so that when she and her son arrived home and saw it with their own eyes they burst out laughing. ‘Me and my son were laughing about it and when we got home and saw it we laughed some more because we just thought how bizarre,’ she explained.

Whilst the scaffolding was being erected Courtney says she tried to tell the scaffolders that the owner of the house hadn’t requested any scaffolding. She questioned the workers as to whether they had mistakenly got the wrong house because Sarah’s house is located on Walnut Drive, which leads to another road called Walnut Gardens.

Courtney said she was informed there had been no mistake and they even had a photo of the property but chose not to show her. Sarah said she tried to contact the scaffolding company to inform them of their mistake but there was no sign or anything to indicate who had left the scaffolding.

She said: ‘That’s when I started thinking this is a bit weird, like is someone trying to rob me?’ 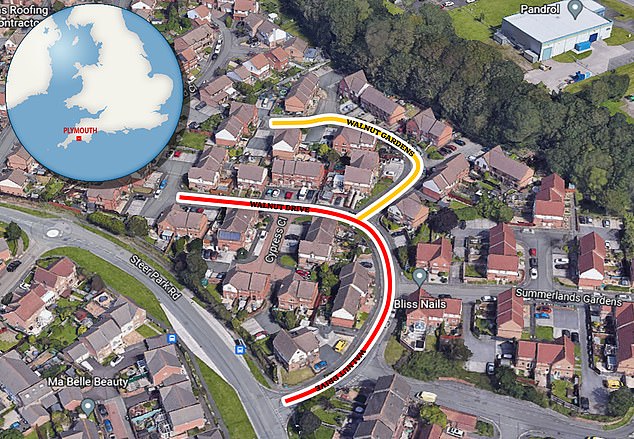 It turned out, Ms Johnson’s street Walnut Drive had been mistaken for the similarly named Walnut Gardens, something Ms Chapman previously pointed out but had been dismissed

But after doing some digging she discovered that the scaffolding was for new windows. Clearly very confused at this point she spoke to the company where the windows had arrived from, but despite apologising they also had no idea why scaffolding had been built around her house.

Her next move was to upload a photo of the scaffolding covering her house to Facebook. In the post, she wrote: ‘Has anyone had this happen? Someone has signed me up for windows and it wasn’t me or my landlord.’

After receiving dozens of messages – largely from people who were as equally baffled – the boss of Plymouth-based company Scafftec Ltd messaged Ms Johnson to apologise.

It turned out that Ms Chapman had been right all along and the scaffolding was intended for Walnut Gardens.

The scaffolding stayed up at Ms Johnson’s home overnight and the company then took it down the next morning.

She said although the guys taking it down didn’t seem to be ‘very happy’, she did compliment the company’s boss who she says was ‘very apologetic’.

Scafftec said the issue had been dealt with and the clients affected had been contacted.