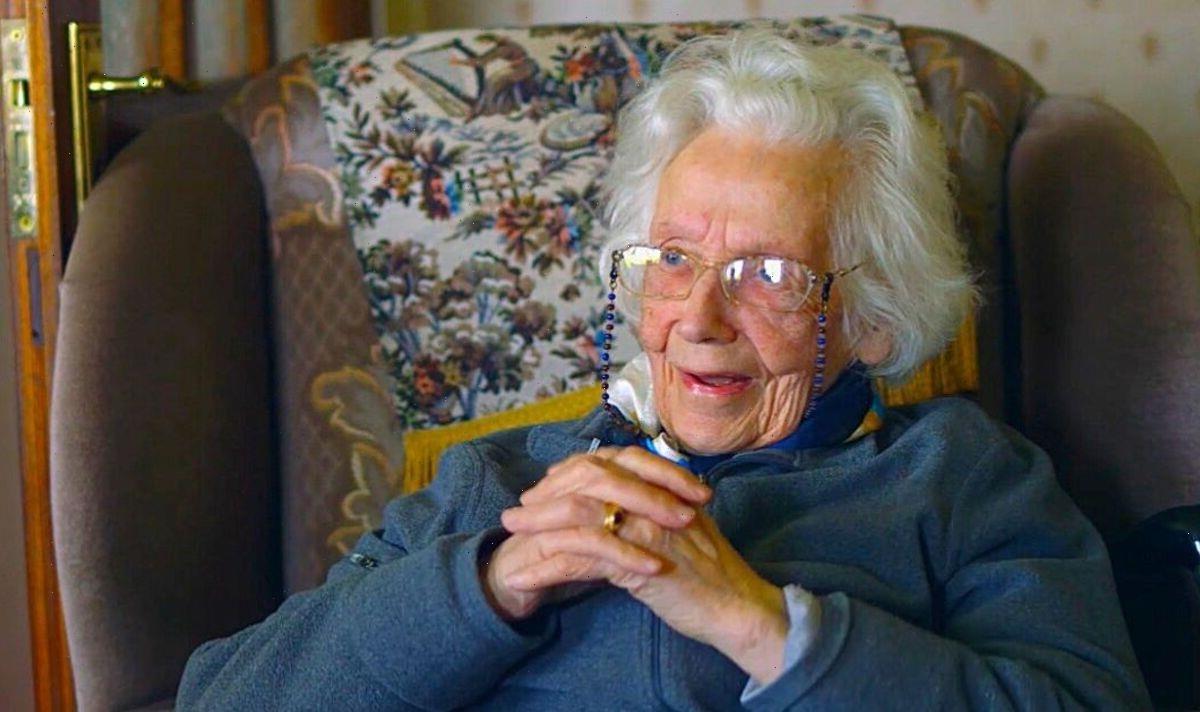 This Morning: Dunkirk and D-Day veterans discuss their service

But were it not for the actions of 21-year-old assistant postmistress Maureen Sweeney, rather than launching the liberation of Europe, D-Day might have become a blood-soaked fiasco – setting back the end of the Second World War by months or years.

Unbeknownst to Ms Sweeney, the destiny of the free world and the lives of, quite literally, tens of thousands of brave men rested on her shoulders. Indeed, she might be the ultimate unsung wartime hero.

For during the Second World War, Ms Sweeney was assistant postmistress in the tiny village of Blacksod in County Mayo, on the west coast of Ireland. As part of her duties, she took daily handwritten barometer and thermometer readings.

Ireland was neutral during the conflict, but taoiseach Éamon de Valera sanctioned that these weather reports would be secretly passed on to the Allies in London. In June 1944, they played a crucial, highly confidential role in General Dwight D Eisenhower’s decision about when to launch the D-Day invasion.

Ms Sweeney had no idea of their import at the time – it was only revealed to her a decade later – but her weather readings saved thousands of lives and ultimately helped the Allies win the war. On June 3, her 21st birthday, she observed that the air pressure in her barometer had dramatically fallen since her previous reading.

That told her a massive storm was on its way across the Atlantic and towards the English Channel. She relayed the report to Dublin, which sent it onwards to Eisenhower’s command. This unexpected data suddenly derailed the Supreme Commander of the Allied Expeditionary Force’s meticulously planned invasion strategy.

He had to make a snap decision about whether to embark on Operation Overlord – as the invasion was codenamed – which had long been planned on June 5. Ms Sweeney’s report alerted Eisenhower to the fact the invasion fleet would be lashed by storm force winds on June 5.

The flat bottomed landing craft would be especially vulnerable to being swamped, with their tanks and other vehicles sent to the bottom and troops drowning under the weight of their equipment. The invasion was on a knife-edge but, on the advice of his meteorologists, Eisenhower postponed D-Day.

It was a momentous decision given the scale of the enterprise and the stakes, leaving tens of thousands of troops already embarked on their landing craft and assault ships or confined to camp along the south coast.

On the following day, June 4, Ms Sweeney noted the pressure reading in the barometer was going up. This suggested a pause in the storm. Although conditions in the English Channel were still turbulent, the new data from Blacksod indicated there was an impending lull which the Allies could exploit.

Her report was the first to identify this narrow window of opportunity during which Eisenhower could initiate the invasion and transform the course of the war. At the time, the Germans had no weather ships in the Atlantic, so they had no way of predicting how the climatic conditions would unfold.

Lacking the information, they were confident the stormy conditions would continue unabated and felt sure the Allies would not risk invading. Thinking invasion unlikely, the arrogant Nazi commander Erwin Rommel even blithely went back to Berlin to buy a pair of shoes for his wife’s birthday present.

One of Eisenhower’s chief meteorologists for the invasion was Group Captain James Stagg, a Scots-born Met Office expert attached to the RAF. Based on Ms Sweeney’s latest readings, Stagg promised Eisenhower the weather would improve. There might be winds of force three or four, rising to force five in a few places, but the sky should be clear. Not ideal, but good enough.

The commanders met with Group Captain Stagg again at 4.30am on June 5. The high pressure first identified in Blacksod was holding and building in.

Secure in the knowledge he would have at least one day of good weather and the Nazis would be unlikely to see them coming, Eisenhower ordered the invasion to commence next day. The rest, as they say, is history. Eisenhower’s decisions speak to his brilliance as a military strategist.

Major Joseph Skelly, author of Irish Foreign Policy: 1919 to 1966, praises the US commander’s innate understanding of the importance of the weather in battle.

“The maxim of military planning is that weather is neutral. But General Eisenhower knew different. Eisenhower knew the weather could be a “friend or a foe,” he explains. “He understood his history. He knew about how the Spanish Armada was dashed upon the rocks of Scotland.

“So in planning for Operation Overlord, the weather was integral. This was true even if the report came from a small outpost at Blacksod on the Mayo coast.” But ordinary troops remain grateful for Ms Sweeney’s unwitting assistance.

As 99-year-old Joe Cattini, a D-Day veteran who served the Royal Artillery, Hertfordshire Yeomanry, emphasises from his home in Portsmouth: “We owe a lot to Maureen from the west of Ireland, those of us who invaded France on D-Day. Because if it hadn’t been for her reading of the weather, we would have perished in the storms.”

Speaking to me from Blacksod, where he works as the local lighthouse keeper, Maureen’s son Vincent underscores the pivotal contribution his mother made to the outcome of the war.

“They went to a few dances, but they had no idea of the significance of the weather report from Blacksod and the part it was to play in the war.”

Ms Sweeney, now 99 and long retired, is delighted to have played a key if unwitting role in the eventual Allied victory. She smiles: “I’m very, very happy we did give the right readings. I felt proud that it was from Blacksod.”

She remains sympathetic for the difficulty of the decisions the Allied supreme commander faced. “He was commander-in-chief, all the proposals had to go through him. He had the whole world, I suppose, to consider.”

Her astounding tale is recounted in a new documentary, Three Days In June: The Story Of The D-Day Forecast. “It’s stunning to extrapolate the launch of D-Day from some weather readings on the west coast of Ireland,” says producer Nuala Cunningham.

“D-Day staggers me in terms of its scope. There were 1,000s of soldiers and 1,000s of ships and aircraft. The operation was on a scale unparalleled in history. It pushed the Germans back and turned the tide of the war.”

Director Gerry Gregg underlines Ms Sweeney’s central role in the war, explaining: “The only possible alternative date was June 19. On June 19, there was a horrific storm when everything that was moving had to be lashed down.

“The Allies were saying, “If we had gone that night, it would have been another disaster that put the opening of the second front back months.” So Maureen’s readings led to the liberation of Europe months ahead of schedule. She saved lives that she couldn’t even have known about in concentration camps and so on.”

What is most remarkable about Maureen is her quiet heroism. Nuala says: “One of the things that really always struck me was that she was just 21. She wasn’t a trained scientist. She wasn’t a researcher. She was a postmistress who’d come from Kerry for a bit of an adventure. But she went out on the hour every hour in horrendous weather and took all those readings outdoors.

“She had no sense of the importance of her work. She had no clue about any international ramifications. It was just her job to record that data. And she went ahead and did it. That’s just so admirable.”

The producer adds: “A part of me is absolutely fascinated with the science behind this. The movement of armies and all of that was huge, but they were underpinned by a group of very modest people working in the background, trying to decipher the data that would give them the right answers. There was no rhetoric, there was no bombast.

“There’s something wonderful about that. Ultimately, we trust people and we trust in science. Hopefully that’s an uplifting message that might come out of this film.”

The immense impact Ms Sweeney had on the fate of Europe is mirrored in the presidential quotations inscribed on the American D-Day memorials in Normandy. Ronald Reagan said: “These are the champions who helped free a continent. These are the heroes who helped end a war.”

For his part, Vincent Sweeney is still struck by the magnitude of the invasion his mother enabled. “Had it not happened, we’d be wearing jackboots today,” he says. “People now realise you have to cooperate, you have to stick together in order to beat certain regimes that want to tread on you.

“That’s why they’re getting down about what’s happening in the world today. Why have we not learned?”

Recollecting that many of the Allied soldiers who saw action that day were teenagers, she says: “The fate of Europe hung on the bravery of those young people. The D-Day story is as relevant today as it has ever been and any presumption we can hide within our borders and watch the rest of the world go by was disproven in that war.”

D-Day veteran Joe Cattini has the last word. He simply breathes a sigh of relief that he got through D-Day: “At least the day was fine – all because of Maureen of Mayo.”

Three Days In June: The Story Of The D-Day Forecast is on PBS America at 11:50am and 7.30pm on Saturday and, afterwards, streaming on Freeview Play.