Set in the golden age of Rome’s historic Cinecittà in the 1950s, the feature follows teenage ingenue Mimosa (Antonici) over the course of one night after she is hired as an extra.

A dark shadow hangs over her personal voyage in the mysterious death of Wilma Montesi, a real-life young woman from Rome with acting aspirations, whose semi-naked body was found on a beach in 1953, on the nearby Lazio coastline.

A cause célèbre at the time, amid theories she had been caught up in a high society prostitution and drugs ring, Federico Fellini conjured up her spirit in the final scene of his 1960 classic La Dolce Vita, in the figure of the blond-haired girl who calls out to Marcello Mastroianni’s character on the beach.

Connecting with a group of international actors working on an Ancient Egypt-set swords and sandals production, Mimosa is plunged into the glamorous, chaotic and unpredictable hubbub of the film world over the course of one night, which will also see her brush with the darker side of life.

Lily plays neurotic Hollywood starlet Josephine, who is at a crossroads in her career; Keery, a rising young actor picking up bit parts; Dafoe, an American art gallerist, who is an old friend of Josephine, and Sennott, an Egyptian queen.

Finalemente L’Alba wrapped on October 15 after an eight-week shoot mainly in Cinecittà, where Fremantle has a five-year lease on six of its studios, where the production also built exterior sets [pictured below].

There were also location shoots on Rome’s famed Piazza di Spagna, the ruins of the Roman villa of Quintili as well as other locations across the city.

Award-winning Thai cinematographer Sayombhu Mukdeeprom, whose credits include Luca Guadagnino’s Call Me By Your Name and Suspiria and Apichatpong Weerasethakul’s Uncle Boonmee Who Can Recall His Past Lives, is attached to the production shot on 35mm.

Deadline visited the Cinecittà set on the tri-ultimate day of filming, sitting down with Costanzo to discuss the genesis of the project and its production. 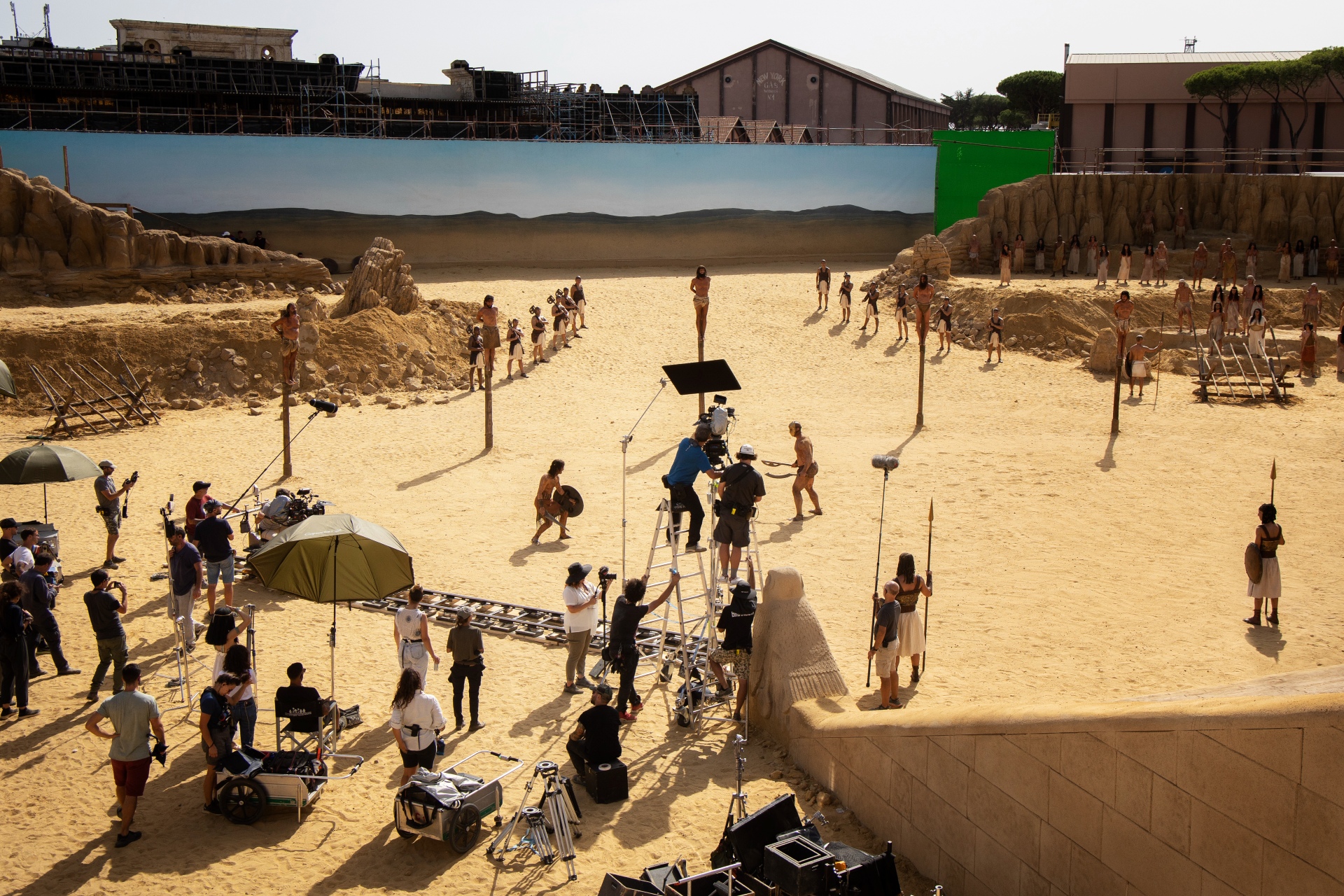 Deadline: This film marks quite a break for you after the long period spent working on ‘My Brilliant Friend’?

Saverio Costanzo: This is my first work based on my own original material. My films have always come from a book or private stories that I adapt. This is my dawn, a new beginning. The inspiration is very personal, based on something that happened to me.

I find Italy a very misogynist country. After the experience of Ferrante, of being in a woman’s shoes for such a long time, six years, I had a lot to say about that but in my own way, which wasn’t that of Ferrante. I believe every film comes from something you’ve done before. It’s like a circle. You become something and then you express what you’ve become.

Costanzo:  With Wilma Montesi. It’s a cold case. I like this investigative stuff. From that, I began writing my story. The process of writing is very mysterious. You never know exactly what you’re really doing. I was enjoying playing with genres and cinema. It was kind of a response to having been a director and showrunner on a TV story for such a long time. I needed to free myself.

On My Brilliant Friend, I was writing, directing, showrunning. I was very sincere with myself, but at the same time Ferrante was always above me, not because she was imposing something – I was free to do anything – but because I was trying to bring to the screen, her characters, her drama, her narrative and to give it back to the readers. I had to free myself from that narrative container. I let myself go into the adventure of this young woman.

Deadline: Does the character of Wilma Montesi appear in the film?

Costanzo: No, the film is set four days after the discovery of her body. Everyone in Rome is talking about it. It’s in the background and feeds into Mimosa’s journey. There’s a Hitchcockian atmosphere, a sense that something dark could also happen to her.

Deadline: So, the film is a thriller?

Costanzo: There are some “Giallo” elements, but no, it’s a comedy, not a comedy in the vein of Mr Bean, but a very light film, a fairytale. There is also a dark level. Every coming-of-age story has to pass by a moment when things are very dark otherwise you don’t come back alive.

Deadline: How did you find Rebecca Antonaci?

Costanzo: I did a commercial for Barilla with her. When I started writing the film, I had her in mind. Then to be sure, I looked for alternatives and came back to her. She reminds me of Giulietta Masina. She has this weird familiarity, but at the same time, she can change herself completely.

I rehearsed her on the key stuff and then let her go. She’s one of the best actresses I’ve worked with and then she was surrounded by Willem, Lily and Joe, who are all really professional.

Deadline: How did you convince the international cast members to take on smaller supporting roles alongside an unknown newcomer?

Costanzo: You would have to ask them. In the case of Willem, I know he didn’t want to play a secondary character but in the end, he agreed because his character has a very touching key scene and he wanted to be part of it.

Maybe the reason everyone accepted my offer is that even if they’re not primary characters, every character is respected and everyone is kind of a protagonist and memorable in their own way. You come away remembering them all.

Deadline: Do you think the stories of Cinecittà and Rome’s cinematic glory days in the 1950s and 1960s, are based on truth or myth?

Costanzo: I wasn’t there.  My memory is cinematographic, but my sense is that the best cinema we created in Italy was in the 1950s and 1960s.

Doing this film, I also understood what was special and good about this era. There was no psychology. People were acting in a very crazy, irrational way. There was so much freedom. It’s after the war and just before the economic boom. People didn’t know where they would end up. Life was an adventure. I hope this work gives back this same kind of energy.

Deadline: Italy is currently enjoying a fresh film and TV production boom and Cinecittà is buzzing. Do you think, there will be a return to the 1950s and 60s atmosphere?

Costanzo: It won’t be the same with all the problems we are facing right now, not to be too pessimistic, with the environment, global warming, the war. It’s impossible for it to be the same.

But I’ve been shooting here in Cinecittà since August and there’s a very good atmosphere. The guys that came here to shoot this film really enjoyed being in Rome. Compared to five years ago, the city is much more international, very cosmopolitan.

Deadline: After all those years telling a story set in Naples, what is it like to direct a film set in your native Rome?

Costanzo: This is my first film set in Rome. As it takes place over the course of just one night, we can’t show much of the city but it’s a deeply Roman film. The faces, the language they use, the old Roman accent.

Deadline: Rome has served as inspiration for countless directors from Federico Fellini to Paolo Sorrentino? What is special about the city?

Costanzo: It’s one of the most beautiful cities in the world. This film does not show the monumental side of Rome, although we shot scenes in Piazza di Spagna, going there early in the morning to shoot.

I’d never understood it [Piazza di Spagna] as a place before – it’s too touristic – but working there for two hours at dawn each day, I finally understood. As a Roman, I’m used to it, but for Paolo Sorrentino coming from Naples, or Federico Fellini from Rimini, it was an Eldorado.

Deadline: Did you work with the same crew as ‘My Brilliant Friend’?

Costanzo: No, I changed everybody. It was set in the 1950s again, like the first series. We’d already watched the 1950s together. I was looking for something different. I’ve ended up with a very young crew which I’m very happy about.

Deadline: Was it hard readjusting to the 90-minute structure of a feature after working on a drama for so long?

I did four features before this. Drama is very different but my approach was the same. On My Brilliant Friend, one episode is half a film. Of course, there is a different rhythm. Television is like an enjoyable marriage, while cinema is like a fire that burns, a passion.