Commissioned by the Louvre, the film brings together two of cinema’s unforgettable faces, Lee Kang-sheng and Jean-Pierre Léaud. 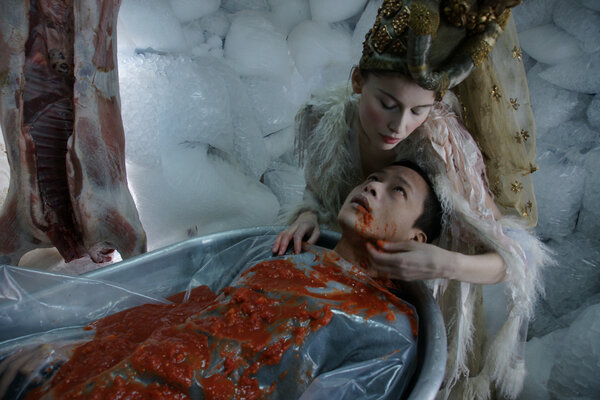 There are some filmmakers whose cinema can be distilled into a single face. François Truffaut is one of them: Jean-Pierre Léaud’s roguish mien became, through Truffaut’s films, synonymous with the spirit of the French New Wave. The Malaysian Taiwanese director Tsai Ming-liang, a devotee of Truffaut, is another. His films double as a record of the face of his muse, Lee Kang-sheng, captured closely in all its gradations over time.

Commissioned by the Louvre Museum, Tsai’s 2009 film, “Face,” brings Lee and Léaud’s great visages together. Lee plays a director, Kang, who is in Paris to film a movie in the Louvre about the biblical story of Salome. Léaud plays an aging actor named Antoine — like his character in Truffaut’s films — while Fanny Ardant (Truffaut’s partner until his death in 1984) appears as a vexed producer.

Time is the narrative principle in “Face.” Scenes of extended duration invite us to explore details within the frame, as one might with a painting, while the impending death of Kang’s ailing mother (Lu Yi-ching) casts a shadow of mortality over the film — particularly over Léaud and Lee, who appear at times like past and future reflections of one another.

The film unfolds as a series of tableaux whose preciousness is tempered by hints of perversity: lust, incest, slapstick and, above all, the strange labor of filmmaking. At one point, we see Laetitia Casta, who plays Salome, in extreme close-up as Kang’s crew debates how to make her look colder. His assistants wipe her cheeks and rub ice on them while she remains uncomfortably silent. Her face is both a decorative mask and a fragile container of roiling emotion, encapsulating the wry duality of Tsai’s cinema.

Face
Not rated. In French, Mandarin and English, with subtitles. Running time: 2 hours 18 minutes. In theaters.