The state election campaign passed an important milestone on Monday morning: the first apology from an obscure candidate who got suddenly famous after saying something wrong, offensive, dumb — or all three.

Hairdresser Michael Piastrino is the Liberal in a crowded field of challengers to Premier Dan Andrews in his seat of Mulgrave, and somebody thought it would be a good idea for Piastrino to perform a piece to camera with “freedom” activist Rukshan Fernando. 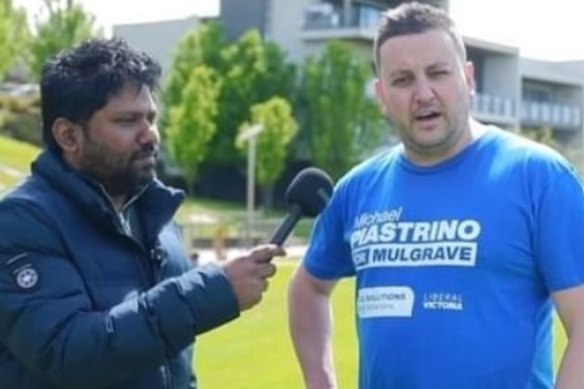 Piastrino declared that an incoming Liberal government would get rid of “all the dodgy policies that Daniel Andrews has put through, and he will be brought to justice for the murder of 800 people”.

Well, that’s one way to get yourself noticed. Unfortunately for the candidate, Liberal Party bosses were paying attention too and it took only until a little after 9.30 for campaign HQ to tweet out the apology.

“I wish to apologise for the inappropriate language I used in an interview over the weekend,” Piastrino’s statement read.

It is then customary for the offending material to be scrubbed from the social media feeds and various other records.

Trouble is, the party doesn’t control Fernando’s socials, where the video was still doing brisk business on Monday despite — or perhaps because of — the apology.

And the bad news for embattled Liberal state director Sam McQuestin is that the footage is here to stay.

“If anyone were to ask me to remove anything, I would not. I have a policy of not removing anything I put up,” Fernando told CBD.