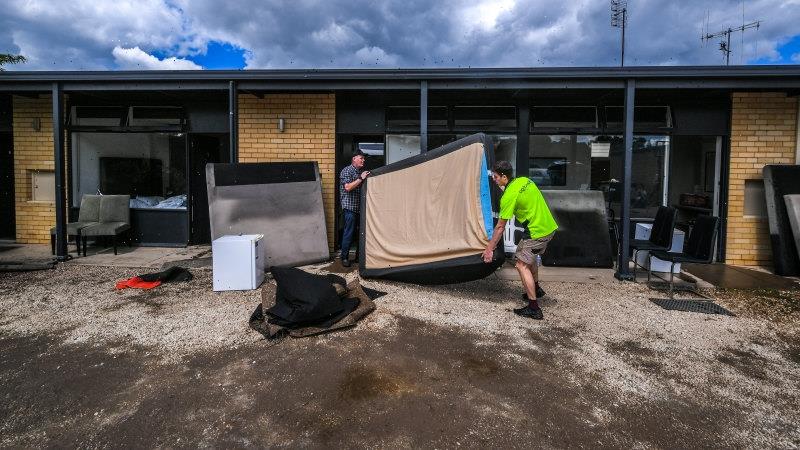 Our live coverage of the extreme weather is free for all readers. Please consider supporting our journalism with a subscription.

Speaking at the state’s emergency control centre on Monday, Andrews promised a $165 million emergency road repair blitz to find and fix potholes and repair road surfaces damaged by the floods.

He said the package would also cover larger-scale works, such as rebuilding roads, bridges and culverts, particularly in the Western, Hume and Loddon Mallee regions, which have suffered extensive damage already.

A Victorian Flood Recovery Management Plan will deliver $150 million for an immediate state-co-ordinated clean up. Andrews said this would allow crews to move quickly into the worst-affected areas to undertake hazard assessment and demolish badly damaged structures.

Andrews said since the beginning of the flood emergency, 509 roads had been closed, but 150 had already reopened. “Where water levels have subsided to safe levels and emergency services deem it safe to do so, crews are working around the clock to restore access,” he said. 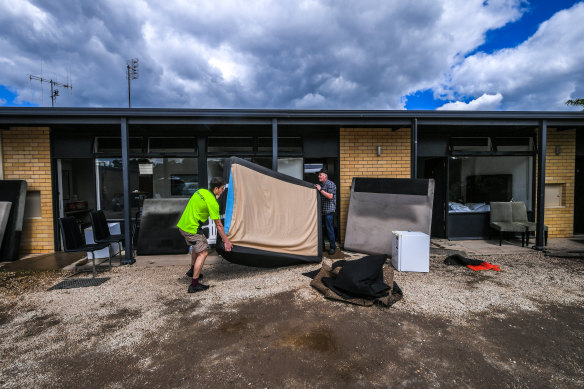 Locals cleaning up at the weekend from the floods in Rochester.Credit:Justin McManus

“In just a few days, hundreds of crews have already undertaken more than 500 individual inspections, found and fixed 10,000 potholes and attended more than 20 landslips right across Victoria.

An Emergency Re-establishment Assistance fund will provide up to $42,250 for uninsured properties, helping to pay for clean-up, repairs, rebuilding and replacing household contents.

Andrews said crews had already made significant progress on repairs on the Hume Freeway, the Western Highway, the Goulburn Valley Freeway and the Murray Valley Highway.

“With more rain forecast in the coming days, the immediate focus is on making key roads usable and safe for emergency services and freight, so vital supplies can reach affected communities as quickly as possible,” he said.

Victoria is facing a flood emergency on an enormous scale, with more than 34,000 homes expected to be inundated or isolated.

There were 14 major emergency warnings active at the time the premier spoke to media late on Monday morning.

As of 6am, residents of Echuca, Charlton, and Bunbartha in Victoria’s north were still being told to evacuate their homes immediately.

Those in Shepparton, Mooroopna, Orrvale, Murchison and Kialla West were being told it was too late to leave their properties and urged to shelter at the highest possible location.

Victoria’s emergency management commissioner Andrew Crisp warned there would be “four to six weeks” of flooding along the Murray River, as he warned those planning remain in at-risk communities to prepare.

Crisp told ABC Radio on Monday morning said the length of flooding expected along the NSW/ Victorian border meant there would be a long campaign ahead of emergency workers and volunteers.

“We’re looking at sort of four to six weeks. I was talking to the experts from the Bureau [of Meteorology] yesterday, and that’s that’s what we saw in 2011,” he said.

“For those who can remember, the front of the flood because of the flatlands was literally kilometres as it slowly work its way along the Murray.”

Australia’s emergency management minister Murray Watt said more than 34,000 homes could be inundated with water or isolated across Victoria due to flooding.

Watt said with some modelling suggesting more than 9000 homes are inundated, Victoria is facing a “very serious situation”.

”The reports I’m getting is that we could be looking at up to 9000 homes inundated in northern Victoria and potentially close to about 34,000 homes in Victoria either inundated or isolated,” Watt said.

He noted that, with a number of agricultural properties affected by floodwaters in northern Victoria, there could be increases to the cost of food and supplies.

“I met farmers in the last couple of days who were getting very close to bringing in bumper crops of canola, and there’s dairy farmers who have been affected and have been having trouble milking their cows,” he said.